Publications of the American Tract Society
by Various Authors 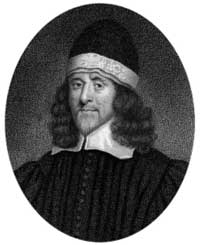 Thomas Goodwin known as 'the Elder', was an English Puritan theologian and preacher, and an important leader of religious Independents. Christopher Hill places Goodwin in the ‘main stream of Puritan thought’.

In 1643 he was chosen a member of the Westminster Assembly, and at once identified himself with the Congregational party, generally referred to in contemporary documents as the "dissenting brethren." He frequently preached by appointment before the Commons, and in January 1650 his talents and learning were rewarded by the House with the presidentship of Magdalen College, Oxford, a post which he held until the Restoration of 1660.

He was chaplain to Oliver Cromwell from 1656. He rose into high favor with the Protector, and was one of his intimate advisers, attending him on his death-bed. He was also a commissioner for the inventory of the Westminster Assembly, 1650, and for the approbation of preachers, 1653, and together with John Owen drew up an amended Westminster Confession in 1658. From 1660 until his death, he lived in London, and devoted himself exclusively to theological study and to the pastoral charge of the Fetter Lane Independent Church.