The Knowledge of God the Father, And His Son Jesus Christ (eBook) 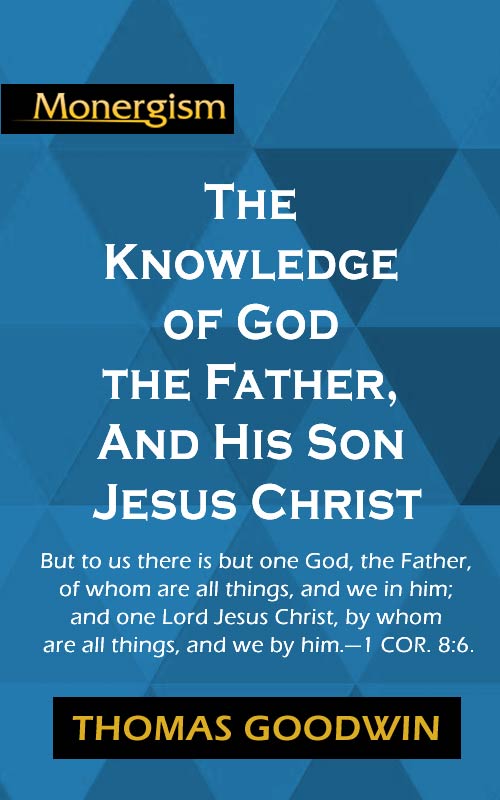 Of the Godhead, and the three Persons within itself.—That there is but one God.—That in the divine nature, or one Godhead, there are three Persons conversing with, speaking to, and glorifying one another.—Which union and communion of the three Persons between themselves is peculiar to the Deity, and incommunicable to any mere creature.

Of the Son of God, the second person in the Trinity What his person is, considered in himself.—He is the eternal Son of the Father, one God in essence with him.—The Son, the second person took the man Jesus into personal union with himself; and so Christ is God-man joined into one person.

Of the glories and royalties that belong unto Jesus Christ, considered as God-man in one person (besides what accrued to him from his performance of the work of our redemption), and which were appointed for him, by his Father, from all eternity.—The apparent manifestation of the divine attributes in the person of Jesus Christ God-man.—The designation of him in God's first decrees, as the end for whom all the creatures were made.—The part that he bore as God-man in the creation, as by him all things were created.—The appointment of him by God to be one Lord over all, under him one God; and to be in a more special respect the head of the elect, on whom they were to hold the tenure of all the blessings bestowed on them above the dues of creation.

BOOK I: Of the Godhead, and the three Persons within itself

CHAPTER I: That God is one in essence.

CHAPTER II: God, one in essence, is three in persons, jointly co-operate in all God's external works

CHAPTER III: That these three persons in the Godhead are persons distinct one from the other.

CHAPTER IV: Persons in the Godhead have an Union and Communion Between Themselves

CHAPTER VI: What it is to Give Glory to God in Himself

BOOK II: Of the Son of God, the second person in the Trinity

CHAPTER I: How greatly it imports us to have a true knowledge of the person of Christ

CHAPTER II: Who this person was that existed from eternity

CHAPTER III: That he was the Son of God, who existed throughout all ages, and from eternity.

CHAPTER IV: What kind of Son he is to God, or in what sense he is the Son of God.

CHAPTER V: That the second person of the Trinity assumed human nature into personal union with himself

BOOK III: Of the glories and royalties that belong unto Jesus Christ

CHAPTER I: A preface giving a short scheme or draft of the ensuing discourse.

CHAPTER II: The personal native glories and royalties which belong to the Son of God, as dwelling in our nature.

CHAPTER III: The honour and royalties that appertain unto Christ, God-man

CHAPTER IV: That by this designed union of the Son of God to this individual creature the man Jesus

CHAPTER V: The glory which Christ, as God-man, had assigned him before the world

CHAPTER VI: The exposition of some other passages in John 17

CHAPTER VIII: That the title of Lord, though it imports him that is God

CHAPTER IX: That all things do depend upon Christ as one Lord

CHAPTER X: How all things depend on Christ

CHAPTER XI: That Christ as God-man is the Creator of all things, proved by scriptures.

CHAPTER XIII: How Christ, God-man, is subservient to God in all the works of his providence