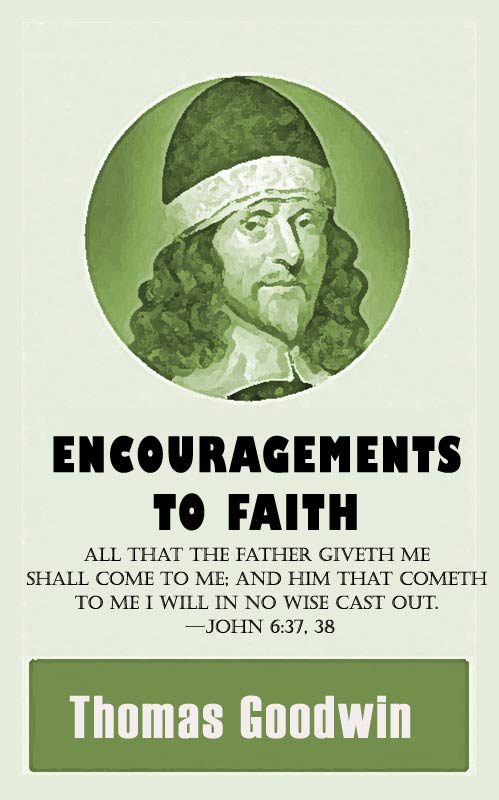 All that the Father giveth me shall come to me; and him that cometh to me I will in no wise cast out. For I came down from heaven, not to do mine own will, but the will of him that sent me.—JOHN 6:37, 38.

THERE are two persons whom faith hath to deal withal in seeking of forgiveness and laying hold of salvation, God the Father and God the Son; the Holy Ghost being that person that sets the heart a-work to seek out for salvation, and reveals the love of them both. And therefore it is that grace and peace (which are the object of faith's inquest) are still wished from God the Father and God the Son; so generally in all epistles, excepting that of the Revelation, given immediately by word of month from Christ himself.

And accordingly when faith comes to treat with these two about the great business of salvation, the first and main thing that it is inquisitive after is, what their heart and mind is, and how they stand inclined towards the receiving and pardoning of sinners. It listens most to hear something of that; and when a man's heart, through faith, is fully and throughly persuaded of it, then he is fully won.

Hence, because the Scriptures were written for our comfort, and so fitted to and for the workings of faith, therefore they were so written, as especially to bring down and lay before us the heart of God and of Christ; and so the main thing they hold forth is, the full intent and purpose both of God and of Christ to pardon and receive sinners. 'This is a faithful saying,' says Paul with open mouth, 'that Christ came into the world to save sinners;' and this Christ himself everywhere indigitates; and to hold forth this is the scope of these words uttered by Christ himself. And such speeches do contain the very heart, marrow, and pith of the gospel.

And though the heart of a sinner will never be fully satisfied till a persuasion be wrought that God and Christ are purposed and willing to save a man's own self in particular, which persuasion is that which we call assurance, yet when once there is a thorough persuasion settled upon the heart, but of so much indefinitely and in general, that God and Christ are willing and fully resolved to save some sinners, so that the heart does truly believe that God is in earnest, this draws on the heart to come to Christ, and is enough to work faith of adherence, such as upon which Christ 'will never cast us out,' as the text hath it.

The great business then for the working faith in men, is to persuade them of God's good will and gracious inclination unto sinners, to beget in them good opinions of God and Christ this way, men naturally having hard and suspicious thoughts of both, as that speech of Christ implies, 'God sent not his Son into the world to condemn the world, but that the world through him might be saved,' John 3:17. Christ would never have hinted such a jealousy, nor suggested such thoughts to men's minds, had they not been in them before, and this to prevent and take off such jealousies. Men are apt to think that God had a design upon them as upon enemies, and laid but an ambushment for their further condemnation, in his treaty of peace tendered to them by his Son. An example of which we have in Luther, who fell into such suspicions as these, for he, misunderstanding some words he met with in the epistle to the Romans, as they were rendered by the vulgar translation then in use, namely, these, that 'God sent his Son to declare his righteousness' (as they are by us translated), he thought the meaning of them to have been this, 'to declare and set forth his judgment' on the world (so he interpreted ad justitiam suam, &c.). The truth is, the jealousies of men's thoughts herein were those that have put God to his oath, 'As I live, I will not the death of a sinner,' &c. So also Heb. 6:17. Men do not so usually question the power of God, he is able enough to save them they think; he is 'able to engraft them in,' as the apostle speaks to the Jews, Rom. 11:23; but all their doubts are about his will. God's will was the fountain and spring of our salvation, in the contriving of which he 'wrought all things according to the counsel of his own will,' as the apostle to the Ephesians speakers; and in another place it is said, 'He will have mercy on whom he will,' &c. And therefore the great queries in our hearts concerning the will of God towards us.