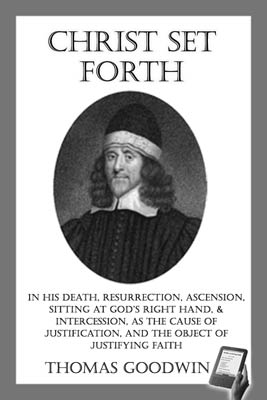 CHRIST SET FORTH In his Death, Resurrection, Ascension, Sitting at God’s right hand, & Intercession, As the CAUSE of Justification, and the OBJECT of Justifying Faith Upon Romans 8:34

TOGETHER WITH A TREATISE DISCOVERING The Affectionate tenderness of CHRIST’s HEART now, in Heaven, unto Sinners on Earth. By Thomas Goodwin, B. D.

Whenever we would go down into our own hearts, and take a view of our graces, let us be sure first to look wholly out of ourselves unto Christ, as our justification, and to close with them immediately; and this as if we had no present or by-past grace to evidence our being in him. And if then, while faith is thus immediately clasping about Christ, as sitting upon his throne of grace, we find either present or fore-past graces coming in as handmaids, to attend and witness to the truth of this adherence unto Christ (as after such single and absolute acts of faith it oftentimes falls out);—the Holy Ghost (without whose light they shine not) "bearing witness with our spirits," that is, our graces, as well as to our spirits;—and then again, for the issue of them, if in the closure of all, we again let fall our viewing and comforting ourselves in them, or this their testimony, and begin afresh (upon his encouragement) to act faith upon Christ immediately with a redoubled strength; if thus (I say) we make such evidences to be subservient only unto faith (while it makes Christ its Alpha and Omega, the beginning and the end of all), this will be no prejudice at all to Christ's glory, or the workings of faith itself; for by this course the life of faith is still actually maintained and kept upon wing in its full use and exercise towards Christ alone for justification. Whereas many Christians do habitually make that only but as a supposed or taken for granted principle, which they seldom use, but have laid up for a time of need; but actually live more in the view and comfort of their own graces, and the gracious workings thereof in the duties towards Christ.

That which I have here endeavored, is, to set forth to all sorts of believers (whether they have assurance or not) Christ as he is the object of our faith as justifying, and as the cause of justification to us; and so I send forth this as a premise and preparatory to that other. And to that purpose I have run over some few articles of our faith or creed, as I found them put together in one bundle by the great Apostle, namely Christ, in his death, resurrection, ascension, sitting at God's right hand, and intercession, and have handled these no further than as in all these he is made justification unto us, therein having punctually kept unto the apostle's scope. By all which you may (in the meantime) see, what abundant provision God has laid up in Christ (in the point of justification) for all sorts of believers to live upon: everything in Christ, whatsoever he was, or whatsoever he did, with a joint voice speaking justification unto us. You may see also that God has in Christ justified us over and over; and thereby come to discern what little reason you have to suffer your hearts to be carried aside to other comforters, and so be spoiled and bereft of these more immediately prepared, and laid up for us in Christ himself. To have handled all those considerations, which his obedience unto death affords unto the justification of a believer, and his comfort therein, in this small tractate, would have made that part too disproportioned to the rest: it alone deserves, and will require a distinct tract, which therefore I have cast into another method; and so in this treatise have touched only upon what may for the present be sufficient to furnish that part, to keep company with its fellows. Only when I had thus presented Christ along from his death, resurrection, and ascension, unto his sitting in heaven, and there performing that great part of his priesthood, the work of intercession, I judged it both homogeneal to all these, and conducing to the greater encouragement of believers in the exercise of their faith, to subjoin that other treatise, How Christ's Heart, now he is in Heaven, stands affected to us Sinners here below. And a better token (take the argument itself, if I could have fully represented it) how to present unto his spouse I know not, than a true character of her Husband's heart, now he is in glory: and (but for method's sake) I would have placed it first, it being more suited to vulgar capacities, whose benefit I aim at. Now in that discourse I confess I have not aimed to keep so strictly unto the matter of justification only, as in the other I have done; but have more generally discussed it, and shown how his heart stands towards us, under all sorts of infirmities whatsoever, either of sin or misery, yet so as it will serve for the matter of justification also. The Father of our Lord Jesus Christ grant us according to the riches of his glory, that Christ may dwell in our hearts by faith, and that we may know the love of Christ, which passes knowledge! Amen. ―Thomas Goodwin

Chapter One: The scope of these words: that they were Christ's originally. Christ the highest example of believing. Encouragements to our faith from thence.

Chapter Two: The scope and argument of this discourse is, either direction to Christ as the object of faith, or encouragement to believers, from all those particulars in Christ mentioned in the text.

SECTION TWO CHRIST, THE OBJECT AND SUPPORT OF FAITH FOR JUSTIFICATION, IN HIS DEATH

Chapter One: How not Christ's person simply, but Christ as dying, is the object of faith as justifying.

Chapter Two: What in Christ's death, faith seeking justification, is especially to eye and look at.

Chapter Three: What support or matter of triumph Christ's death affords to faith for justification.

Chapter Two: For the explanation of both these is shown, how Christ sustained a double relation: first, of a surety given, for us; secondly, of a common person in our stead. The difference of these two, and the usefulness of these two considerations, for the explaining all the rest that follows, in this whole discourse.

Chapter Three: The first head: The evidence of justification which Christ's resurrection affords to faith, explained by two things. 1. By showing how Christ was made a Surety for us. 2. How his resurrection as a Surety holds forth this evidence.

Chapter Four: The second head propounded, the influence Christ's resurrection has into justification. Two branches of the demonstration of this: First, that Christ was a common person, representing us in all he was, or did, or suffered, handled at large; more especially a common person in his resurrection.

Chapter Six: How our faith may raise from hence, a matter of triumph about our justification. An explication how we are justified by faith, although justified in Christ at his resurrection.

Chapter One: A connection of this third head with the two former; showing how it affords a farther degree of triumph. Two things involved in it: 1. Christ's ascension; 2. Christ's power and authority in heaven.

Chapter Two: Showing first what evidence for our justification Christ's ascension into heaven affords unto our faith, upon that first fore-mentioned consideration of his being a Surety for us.

Chapter Three: Showing what evidence also Christ's sitting at God's right hand, having been our Surety, affords to our faith for justification.

Chapter Four: Demonstrates, in the second place, what influence Christ's ascension has in a believer's non-condemnation, upon that second premised consideration, of Christ's being a common person for us. The security that faith may have from thence.

Chapter Five: Demonstrates in like manner what influence Christ's sitting at God's right hand has into our justification, upon that second consideration of his being a common person. And the security faith may have from thence.

SECTION FIVE THE TRIUMPH OF FAITH FROM CHRIST'S INTERCESSION

Chapter One: A connection of this with the former; and how this adds a further support. Two things out of the text propounded to be handled: First, the concurrency of influence that Christ's intercession has into our salvation. Secondly, the security that faith may have therefrom for our justification.

Chapter Two: The first head explained by two things: First, intercession, one part of Christ's priesthood, and the most excellent part of it.

Chapter Three: The second; the special peculiar influence that intercession has into our salvation and justification, and the reasons why God appointed it to be added to the former.

Chapter Four: The second head: the great security the consideration of Christ's intercession affords to faith for our justification, showed, 1. By way of evidence; by two things.

Chapter Five: The prevalency of Christ's intercession, and the powerful influence it has into our salvation, demonstrated first from the greatness of Christ, and his favour with God.

Chapter Six: Secondly, the prevalency of Christ's intercession demonstrated from the righteousness of the cause he pleads even in justice; how forcible the cry of his blood is, himself appearing to intercede with it.

Chapter Seven: Thirdly, the prevalency of Christ's intercession, and of his grace with his Father, demonstrated from the greatness and absoluteness of his power to do whatever he asks.

Chapter Eight: The potency and prevalency of Christ's intercession, demonstrated from the graciousness of the person with whom he intercedes, considered first as he is the Father of Christ himself.

Chapter Nine: The potency of Christ's intercession demonstrated, in that he intercedes with God, who is our Father. How God's heart is as much inclined to hear Christ for us as Christ's is to intercede.

Chapter Ten: The use of all; containing some encouragements for weak believers, from Christ's intercession out of Hebrews 7:25.