The Marrow of Theology
by William Ames

A Sketch of the Christian's Catechism - Ames
by William Ames 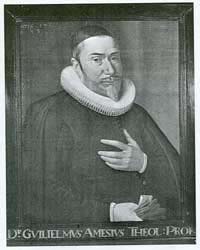 Prominent Puritan preacher and theologian of England and the Netherlands. Educated at Christ's College, Cambridge (B.A. 1598, M.A. 1601), he stayed on to become a fellow and teacher of Christ's. As a student he was converted by the Puritan preaching of William Perkins, and throughout his life he associated himself with the more extreme Puritans. In 1610 Ames was expelled from Cambridge because of his Puritanism, and thereafter his career was destroyed in England.

Ames took refuge in the Netherlands, joining the large English-Scottish refugee community. During his immigrant years he served first as a military chaplain and then as professor of theology at the University of Franeker (1622-33), where he earned a doctor of theology degree. He was a strong Calvinist and opposed the Arminians, which reputation drew him to the Synod of Dort (1618-19) as an adviser to the Synod president. He died at Rotterdam.

He was often known as "the Learned Doctor Ames" because of his great intellectual stature among Puritans. As a Puritan intellectual he combined Calvinist doctrine, Ramist philosophy (from Peter Ramus), and Puritan practical divinity. His best known books are The Marrow of Sacred Divinity (1627, in Latin and English), and Conscience, or Cases of Conscience (1630, also in Latin and English). Both went through many seventeenth century editions, and the Marrow has been reprinted as recently as 1968. He wrote many books against Dutch Arminianism and against the episcopal system in England.

Ames stressed that theology must combine orthodox doctrine, which he defined as Calvinistic, and moral practice. Theology divides into a Ramist dichotomy: faith and observance. In church practices he experimented with new ideas. He believed in independent, voluntary congregations, but not separatism. He was one of the founders of the Congregationalist movement among Puritans. Just before his death he had accepted a call to become copastor with Hugh Peter of the English church of Rotterdam. This church was one of the earliest Congregationalist churches (1632). Ames enjoyed a great reputation among Nonconformist English Puritans and among the Puritans of New England. Cotton Mather of Boston called him "that profound, that sublime, that subtil, that irrefragable, yea that angelical doctor."
- K. L. SPRUNGER

Smartphones and Fallen Natures
Doug Eaton
Discard Entanglements
Rev D Patrick Ramsey
An Impending Danger
Curated Resources
What Lewis Had Wrong about Hell
Curated Resources
The influence game
Janie B. Cheaney
Clinging to God and Grammar
Carl Trueman
The Hidden Harm of Gender Transition
Sharon James
Three Encouragements for a Courageous Life
Isaías Muñoz
Opening Blind Eyes to the Truth about Sex-Trafficking in America
Curated Resources
It Is Finished: Beholding the Cross of Christ from All of Scripture
David Schrock
God’s Love for the Believer is as. . .
Nicholas T Batzig
Proof of God?
Joseph Minich
A Complete Collection of Farewell Sermons (eBook)
Various Pastors
Calvinism and the Doctrine of Philosophical Necessity
William Cunningham
Man’s Creation in a Holy but Mutable State
John Howe
God’s Foreknowledge of Man’s Voluntary Actions does not Necessitate the Will of Man
Stephen Charnock
How Should We Respond to the Book of Revelation?
Dennis E Johnson
Bring Back Foxe’s
Darryl Dash
Fighting Human Trafficking in Your City
Curated Resources
Creeds and Confessions: What’s the Difference?
Curated Resources
Who Will ‘Stand in the Gap’?
D A Carson
Ten Words That Changed Everything About My Suffering
Joni Eareckson Tada
Gnosticism and Naturalism: Why We Must Reject Both!
Craig Carter
How do I read the Old Testament historical books devotionally?
Samuel Lee
The Family Expositor - Romans (docx)
Philip Doddridge
An Election of Particular Persons
Benjamin Keach
How Sins are Removed in Justification
Samuel Rutherford
Of the Conditionality of the New Covenant.
John Flavel
How Christians answer to the call of Christ, and so come to have Fellowship with him
John Ball
How Christ Doth Bring His People into Covenant with Himself
John Ball
A Treatise of the Covenant of Grace
John Ball
One Overlooked Danger in Christian Parenting
Trevin Wax
Christian Identity according to the Apostle Paul
Matthew Adams
The Effectual Truth of Identity Politics
Curated Resources
Concerning the One True God’ & ‘Of God the Father
Zacharias Ursinus
Propositions and Principles of Divinity
Curated Resources
The True God Opposed, Exclusively, To All the God's of the Heathen
John Calvin
Christian Liberty
Fred A Malone
What is Christian Liberty?
George Gillespie
Of Christian Liberty and Liberty of Conscience
Pastor Bob Burridge
Christian Liberty and Liberty of Conscience
Brian Schwertley
Christian Liberty and Liberty of Conscience
John Battle
Christian Liberty and Liberty of Conscience
Tom Nettles
Pastor, Defend Christian Liberty
Caleb Greggsen
What is Christian Liberty?
Mike Ratliff
Liberty vs. Law?
Burk Parsons
Who Should Come to the Lord’s Table?
W Robert Godfrey
The Snare of Subtweeting
Nicholas T Batzig
Does Reformed theology continue to reform?
Joel E Kim M.Div
Self or Christ; Which Is It?
Horatius Bonar