What is the Eye of the Needle? 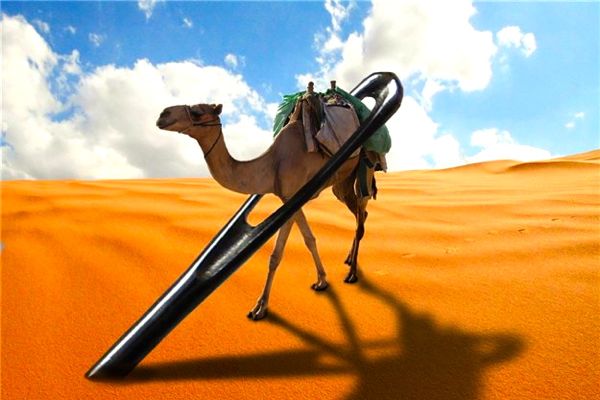 I haven’t always sat under the teaching ministry of John MacArthur. In fact, earlier parts of my Christian walk have been tarnished by over-exposure to some really bad Bible teachers, and attendance in some very man-centered churches. A lot of my expertise in error comes from first-hand experience.

It took longer than I care to admit, but eventually, the reckless handling of Scripture became too hard to ignore. One of the most blatant examples was related to Christ’s interaction with the rich young ruler. Luke 18:22-25 explains the sad end to their conversation.

When Jesus heard this, He said to him, “One thing you still lack; sell all that you possess and distribute it to the poor, and you shall have treasure in heaven; and come, follow Me.” But when he had heard these things, he became very sad, for he was extremely rich. And Jesus looked at him and said, “How hard it is for those who are wealthy to enter the kingdom of God! For it is easier for a camel to go through the eye of a needle than for a rich man to enter the kingdom of God.”

Based on the simple reading of the text, there shouldn’t be any confusion about what it means to pass a camel through the eye of a needle (the reference also appears in Matthew 19:24 and Mark 10:25). And yet I’ve witnessed pastors do all sorts of exegetical gymnastics to explain away the clear meaning of Christ’s words—not only in my original Australian congregation, but throughout Europe and America, as well. What at first glance seems like a straightforward hyperbolic illustration has been twisted, contorted, and explained away through eisegesis and iffy archeology.

The explanation usually goes something like this: Christ wasn’t referring to the eye of a literal needle—that would be preposterous. Instead, He was talking about a narrow entrance into the city of Jerusalem, a gate known locally as “the eye of the needle.” This gate was so small that a camel could only be brought through with great difficulty, squeezed through on its knees—which depicts how we humbly need to come to the Lord.

That explanation can be quite compelling—after all, humility is necessary—as long as you don’t read the next two verses of Luke’s gospel: “They who heard it said, ‘Then who can be saved?’ But He said, ‘The things that are impossible with people are possible with God’” (Luke 18:26-27).

Christ’s words make the point of His illustration abundantly clear. He can’t mean that the rich man can only attain salvation through humility—getting a camel to stoop and squeeze through a narrow gate might be challenging, but it doesn’t require divine intervention. In context, His point is unmistakable: Manufacturing your own salvation is just as impossible as threading a massive beast of burden through the eye of a sewing needle. Apart from the intervention of the Lord, it cannot be done.

In his commentary on the passage, John MacArthur explains another key flaw with the spurious interpretation:

There is no evidence that such a gate ever existed. Nor would any person with common sense have attempted to force a camel through such a small gate even if one had existed; they would simply have brought their camel into the city through a larger gate. [1]

The Persians expressed impossibility by using a familiar proverb stating that it would be easier for an elephant to go through the eye of a needle. The Jews picked up the proverb, substituting a camel for an elephant, since camels were the largest animals in Palestine. [2]

So why go to such great lengths to sidestep the clear meaning of Christ’s illustration? The reasons come into better focus when we consider the most vocal proponents of the “Needle-Gate” theory.

For starters, it’s predominant among many prosperity preachers and televangelists, who understandably don’t want to draw scrutiny and rebuke for their extravagant lifestyles. Christ’s exclamation, “How hard it is for those who are wealthy to enter the kingdom of God!” (Luke 18:24) would have been a shock to His original audience. As John MacArthur explains, “The idea that wealth was a sign of God’s blessing was deeply entrenched in Jewish theology.” Prosperity preachers today have repeated that lie to pillage the people of God. What better way to insulate their thievery from Christ’s warning than to warp the meaning of His words altogether?

There’s another group that favors the “Needle-Gate” theory, and they’re grounded in the same mindset that Christ originally rebuked. The rich young ruler was a product of the Jewish religious system, and his self-assurance about earning his salvation was a direct reflection of the Pharisees’ man-centered legalism.

Just consider his original question to Christ, “What shall I do to inherit eternal life?” (Luke 18:18). As John MacArthur explains, “In keeping with his legalistic system of self-righteousness, he sought that one elusive good work that would push him over the top to obtain eternal life for himself.” [3]

In the same way, countless pastors and church leaders today downplay the Lord’s intervening work in salvation and defy Christ’s words in this passage, treating faith as a mere decision, and repentance as nothing more than simply changing your mind. The God-centered gospel of regeneration is substituted with a man-centered decisionism which makes salvation the result of one’s humility—however difficult that may be.

As John MacArthur explains, that betrays the point of Christ’s words, and the truth of the gospel.

The obvious point of that picturesque expression of hyperbole is not that salvation is difficult, but rather that it is humanly impossible for everyone by any means, including the wealthy. Sinners are aware of their guilt and fear, and may even desire a relationship with God that would bring forgiveness and peace. But they cannot hold on to their sinful priorities and personal control and think they can come to God on their own terms. The young man illustrates that reality. [4]

The “Needle-Gate” theory isn’t exclusive to false teachers—it’s been around long enough and taught widely enough that even some faithful teachers assume this interpretation by not carefully studying the text in context. Tragically, a wrong interpretation of this text not only promotes error, it becomes a missed opportunity for worship. How so?

Luke 18:25 is one of the clearest testimonies from our Lord on the inability of man to do anything to save himself. This doctrine of total inability is a vital component to the gospel; it highlights the impossibility of salvation apart from a sovereign work of God in a person’s heart. More than that it highlights God’s grace in that He does do that work. For that reason this text should lead to humble praise of our God and Savior.

What We Miss When We Skip the Book of Ezra
Ryan Higginbottom
Why Romans Is the Greatest Letter Ever Written
Andrew Naselli
What the Early Church Can Teach Us about Living in This Strange New World
Carl Trueman
Why ‘Cool Church’ is no longer working with Millennials and Gen Z
Curated Resources
Judas’ Betrayal and the Providence of God
Josh Buice
The Treachery of Judas Iscariot and the Sovereignty of God over Sin
Sam Storms
Why Did Jesus Choose Judas?
John Piper
The Sovereignty of God and Christian Ministry
Richard Phillips
God’s Sovereignty in Salvation II
Michael J Kruger
God’s Sovereignty in Salvation I
Michael J Kruger
How Can a Good God Allow Evil?
Richard Belcher
Judas, Jesus and the Sovereignty of God - Part 2
Jeff Durbin
Judas, Jesus, and God's Sovereignty - Part 1
Jeff Durbin
Can You Be a Pharisee and Not Know It?
Keith Mathison
Transubstantiation: What Catholicism Teaches About the Supper
Reid Karr
Making Use of the Visible Signs: The Importance of the Sacraments in the Christian Life
Benjamin Glaser
Where Mercy and Justice Meet
Dave Harvey
Citizens and Exiles: Christians, the Church, and Culture
Scott Aniol
The Marxist Eschatology of Critical Race Theory
Darrell B. Harrison
What does it look like to make a disciple?
Steven J Lawson
How should a church engage in discipleship?
Voddie Baucham
Can you describe the Sovereignty of God? (YouTube)
James White
Kingdom Race Theology: Is This God’s Plan or Something Else?
Virgil Walker
Letters to the Seven Churches: To the Church in Ephesus (Revelation 2:1-7)
Kim Riddlebarger
Romans 8: Mortifying Sin
Stephen Unthank
Romans 8: Christ is Our Life
Stephen Unthank
Don’t Sacrifice Your Children
Paul Liberati
How Ordinary Worship Is both Reverent and Relevant
Curated Resources
Samuel Miller on the “Sanctified Judgment” of the Enlarged, Elevated, and Strengthened Mind: Piety, Learning, and the Right Kind of Bias
Paul Kjoss Helseth
5 New Stats You Should Know About Teens and Social Media
Chris Martin
Truths We Must Defend: Lessons from China
Luke Wesley
A Token of the Righteous Judgment of God (eBook)
Thomas Manton
The Seven Deadly Sins And the Seven Cardinal Virtues (eBook)
James Stalker
Gender Dysphoria and the Body-Soul Relationship
Edmund Fong
Rejecting Syncretism: Paul and the Python
Curated Resources
Romans 8: Emancipated!
Stephen Unthank
God is a se
Stephen Unthank
No Civilization Without Restraint: Wise Words From 1939
John Stonestreet
Christ’s Crucifixion Isn’t Child Sacrifice
Alan Shlemon
What Is Fornication?
Aaron L. Garriott
Kinsman Redeemer
Quentin B. Falkena
Mutilating Our Bodies
Bethel McGrew
Complementarianism, the Regulative principle Holding for all of Life & How We Undermine our own Principle
Stephen Kneale
Not Now: The Surprising Joy of Waiting on the Lord
Lee Hutchings
“Luxury Beliefs”
John Stonestreet
Getting to the End: Finding Faith in the Eternal Promises of God
Benjamin Glaser
How Should Pastors Answer the Question, Is Christianity Good?
Dane C Ortlund
How to Forgive
John Beeson
Vocation and the Christian
Gene Veith
The Importance of a Plurality of Elders
Michael Brown