The Blessings of Grace (eBook) 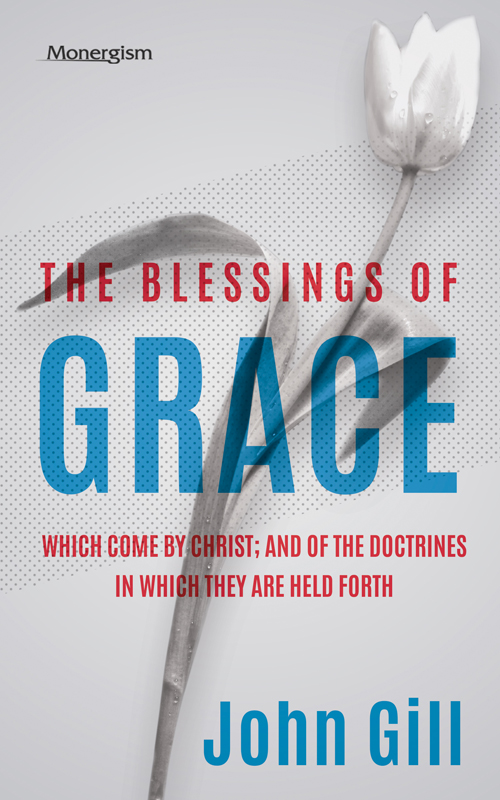 THE BLESSINGS OF GRACE WHICH COME BY CHRIST; AND OF THE DOCTRINES IN WHICH THEY ARE HELD FORTH

I shall now proceed to consider the blessings of grace, which come by him, through the exercise of them; and especially his priestly office; for he is come a High-Priest of good things to come, which under the former dispensation, were promised, prophesied of, and prefigured in it; but not accomplished; for the law had only a shadow of these good things to come, but now they are come, and are actually obtained, through Christ's coming in the flesh; and through what he has done and suffered in it; as redemption, satisfaction, and reconciliation for sin, remission of sin, justification, adoption, &c.; and as redemption stands in the first place, and is a principal and most important blessing and doctrine of grace, I shall begin with that.

I. I shall settle the meaning of the word; and show what it supposes, includes, and is designed by it. Our English word Redemption, is from the Latin tongue, and signifies, buying again; and several words in the Greek language, of the New Testament, are used in the affair of our Redemption, which signify the obtaining of something by paying a proper price for it; sometimes the simple verb αγοραζω, to buy, is used; so the redeemed are said to be bought unto God by the blood of Christ; and to be bought from the earth; and to be bought from among men; and to be bought with a price; that is, with the price of Christ's blood, 1 Cor. 6:20; hence the church of God is said to be purchased with it, Acts 20:28. Sometimes the compound word εξαγοραζω, is used; which signifies, to buy again, or out of the hands of another; as the redeemed are bought out of the hands of justice; as in Gal. 3:13, and 4:5. In other places λυτροω is used, or others derived from it; which signifies, the deliverance of a slave, or captive, from his thraldom, by paying a ransom-price for him: so the saints are said to be redeemed, not with silver or gold, the usual price paid for a ransom; but with a far greater one, the blood and life of Christ, which he came into this world to give, as a ransom-price for many; and even himself, which is αντιλυτρον, and answerable, adequate, and full price for them, 1 Pet. 1:18. There are various typical redemptions, and that are of a civil nature, which may serve to illustrate our spiritual and eternal redemption by Christ.

OF REDEMPTION BY CHRIST

OF THOSE PASSAGES OF SCRIPTURE WHICH FAVOUR UNIVERSAL REDEMPTION

OF THE SATISFACTION OF CHRIST

OF THE PARDON OF SIN

OF THE PERSEVERANCE OF THE SAINTS