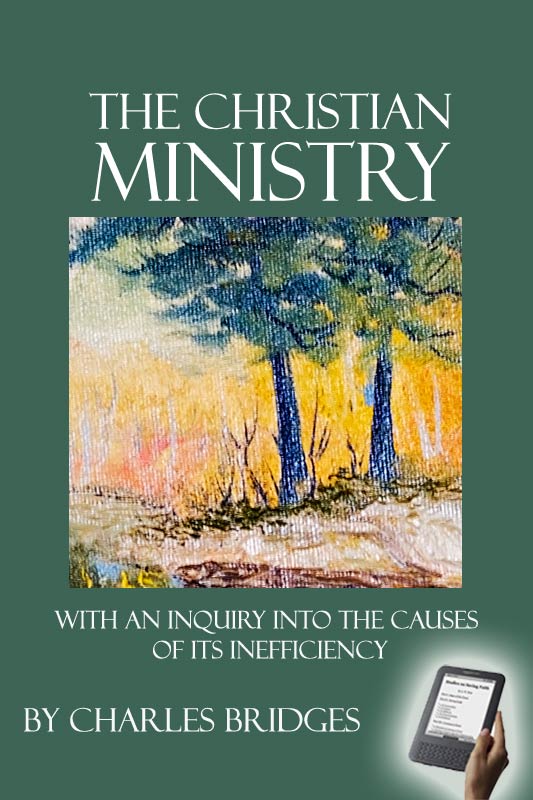 The revival of the church seems to be closely connected with the condition of its ministry. In this book Charles Bridges considers the general and personal causes of ministerial ineffectiveness, and goes on to examine preaching and pastoral work. Charles Bridges (1794-1869) was one of the leaders of the Evangelical party in the Church of England in the last century. He was vicar of Old Newton, Suffolk. As usual, Banner of Truth is faithful to the original in its rendering of this classic. 390 pages.

”To enlighten the mind and affect the heart are the two main ends of the Christian ministry. The first demands wisdom and plainness, the second fervency, as the spirit of scriptural preaching. This combination exhibits the minister as “a burning and a shining light” … imparting the spiritual light of divine truth, as well as the spiritual heat of divine fervour … Nothing, says Baxter, is more indecent than a dead preacher speaking to dead sinners the living truth of the living God.” – CHARLES BRIDGES

This book is another ladened with practical and important truth which every minister should cling to. Bridges will raise the level of the pastorate in the eyes of all those who claim the banner of Christian ministry in this regard. He will also show what the pastorate is and what the pastorate is not. He will dispel the fallacies and engage the Pastor in his work, rebuke him, exhort him, and aid him in becoming a better and more reliable witness for the truth of Christ. (Matthew McMahon)

Charles Bridges (1794-1869) was one of the leaders of the Evangelical party in the Church of England in the nineteenth century. He was the vicar of Old Newton, Suffolk, from 1823 to 1849, and later of Weymouth and Hinton Martell in Dorset. Although The Christian Ministry is Bridges’ best-known literary work, his expositions, which include Ecclesiastes, Psalm 119, and Proverbs, are highly valued.

Reigning Omnipotent in Every Place
Dr J Ligon Duncan III
The Miraculous and Mundane Working God
Joe Holland
Assurance of Salvation (3-Part YouTube Series)
Daniel Hyde
A Shadow of the Good Things - Hebrews 10:1-4 (MP3)
Daniel Hyde
A Single Sacrifice - Hebrews 10:5-18 (MP3)
Daniel Hyde
Let Us Draw Near - Hebrews 10:19-22 (MP3)
Daniel Hyde
Good Liturgy Is The Best Instructor
Daniel Hyde
Reformed Thoughts On Law And Gospel
Daniel Hyde
God’s Glory In The Manna
Daniel Hyde
God’s Glory In The Sea
Daniel Hyde
God’s Glory In The Mountain
Daniel Hyde
Kingdom of God, Israel and the Four-fold Estate of Man (MP3)
Rob McKenzie
A Word to the Impenitent
John Colquhoun
Who Are the “Sons of God” in Genesis 6?
R C Sproul
Expectations of the Pastor’s Family
Brian Croft
Does God Judge Nation-States Today?
Bill Fullilove
After the Virus: The Deluge?
Joseph Pearce
Justification and Roman Catholicism
Stephen Unthank
5 Myths about the Armor of God
Iain Duguid
A Christian and Plain Treatise of the Manner and Order of Predestination (eBook)
William Perkins
Coronavirus, Judgement, and Salvation
Reformed Brotherhood
Tongues of Angels?
John Samson
Learning How to Meditate
Joel R Beeke
Can We Talk about Death?
Justin Poythress
Ethics in Flux
Bruce Baugus
What’s Left When Everything’s Taken Away? (2 Timothy 1:8-12)
Darryl Dash
Sell Yourself Short: The Rare Joy of Christian Humility
David Mathis
‘My Soul Refuses to Be Comforted’: A Song for Long Nights in Darkness
Jon Bloom
COVID-19 & The Crisis of Christian Conscience
Jonathan Leeman, Andy Naselli
Preaching under the smile and the smiting rod
Andrew Roycroft
Why Do (Modern) Christians Rarely Talk about Rewards in Heaven?
Michael J Kruger
Will Evangelism Change as America Becomes Post-Christian?
Cameron Cole, Derek Rishmawy
What Should We Preach During a Crisis?
Phil Newton
Revelation, Coronavirus, and the Mark of the Beast: How Should Christians Read the Bible’s Most Fascinating Book? (Part 1)
Kevin DeYoung
Commentary on Hebrews Chapter 11: A Cloud of Heavenly Witnesses Leading to the Heavenly Canaan (eBook)
William Perkins
Where Would We Be Without TRUTH?
C. R. Carmichael
Why The World’s Dark Business Is Booming
C. R. Carmichael
Man and Woman: A Biblical Systematic Anthropology
Steven Wedgeworth
There is No Faith So Little That It Is Not Saving
Jared Wilson
God’s Plan for Your Discontentment
Nancy Guthrie
Effectual Call — Internal Call (Bible)
Bible Passages
Teach Me!
H.B. Charles Jr.
What is a Christian's Duty to Unjust Government?
Phil Johnson
Infallibility/Inerrancy
B B Warfield
Athanasius (NT Canon/AD 367)
St. Athanasius
Is Jesus Simply a Retelling of the Horus Mythology?
J Warner Wallace
Those Pre-Christian Deities Aren’t Much Like Jesus After All
J Warner Wallace
Is Jesus Simply a Retelling of the Mithras Mythology?
J Warner Wallace
Atheists in Praise of Christianity?
Jonathon Van Maren
What Millennials Don’t Know About Socialism and Communism Will Hurt Them
Gary DeMar