An Ark for All God's Noahs (eBook) 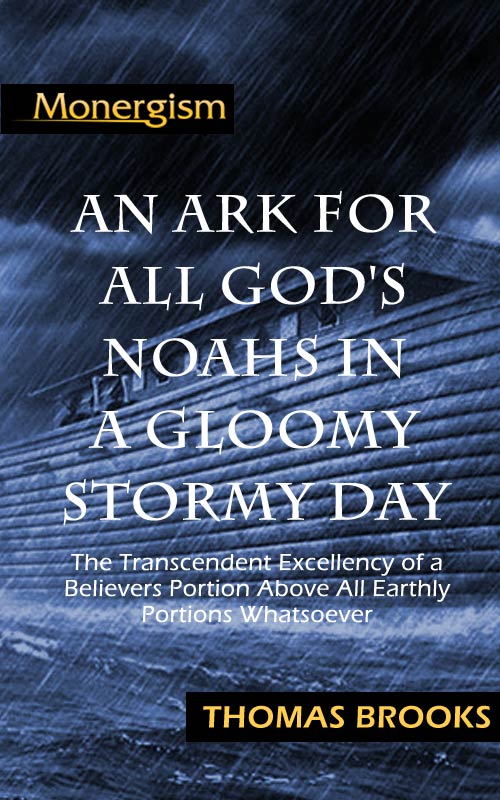 An Ark for All God's Noahs in a Gloomy, Stormy Day. or The Transcendent Excellency of a Believers Portion Above All Earthly Portions Whatsoever

"The Lord is my portion, says my soul; therefore I will hope in Him." Lamentations 3:24

CERTAINLY if Ennius could pick out gold out of a dunghill, I may, by divine assistance, much better pick out golden matter out of such a golden mine as my text is, to enrich the souls of men withal. The best of painters [Apelles], to draw an exquisite Venus, had set before him an hundred choice and selected beauties, to take from one an eye, another a lip, a third a smile, a fourth an hand, and from each of them that special lineament in which the most excelled; but I have no need of any other scripture to be set before me to draw forth the excellency of the saints' portion than that which I have now pitched upon; for the beauty, excellency, and glory of an hundred choice scriptures are epitomized in this one.

The Jewish doctors and other writers differ about the time of Jeremiah's penning this book of the Lamentations; but to be ignorant of the circumstance of time when this book was made, is such a crime as I suppose will not be charged upon any man's account in the great day of our Lord Jesus.

Doubtless this book of the Lamentations was composed by Jeremiah in the time of the Babylonian captivity. In this book the prophet sadly laments and bewails the grievous calamities and miseries that had befallen the Jews, viz. the ruin of their state, the devastation of their land, the destruction of their glorious city and temple, which was the great wonder of the world, the profanation of all his holy things, the contemptible and deplorable condition of all sorts, ranks, and degrees of men; and then he complains of their sins as the procuring causes of all those calamities that God in his righteousness had inflicted upon them. He exhorts them also to patience under the mighty hand of God, and stirs them up to repent and reform, as they would have their sins pardoned, judgments removed, divine wrath pacified, their insulting enemies suppressed, and former acts and grants of favour and grace restored to them.

But to come to the words of my text,

The Lord Jehovah, from Havah, he was. This name Jehovah is the most proper name of God, and it is never attributed to any but to God.

ANALYSIS OF TEXT AND TOPICS

I. WHAT A PORTION GOD IS

II. GROUNDS OF TITLE UNTO GOD AS A PORTION

III. IMPROVEMENT OF THE TRUTH THAT GOD IS A PORTION

Question 1. How shall we know whether God be our portion? Answered

Question 2. How shall we evidence this? Answered

Incitements to see that God is our portion

How to make God our portion

Positions that may be useful