Body of Divinity
by Thomas Watson

The Lord's Prayer
by Thomas Watson

The Ten Commandments
by Thomas Watson 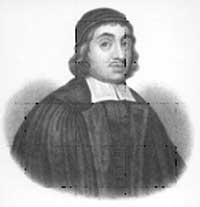 Thomas Watson was probably born in Yorkshire. He studied at Emmanuel College, Cambridge, earning a Bachelor of Arts degree in 1639 and a Master of Arts degree in 1642. During his time at Cambridge, Watson was a dedicated scholar. After completing his studies, Watson lived for a time with the Puritan family of Lady Mary Vere, the widow of Sir Horace Vere, baron of Tilbury. In 1646, Watson went to St. Stephen’s, Walbrook, London, where he served as lecturer for about ten years, and as rector for another six years, filling the place of Ralph Robinson.

In about 1647, Watson married Abigail Beadle, daughter of John Beadle, an Essex minister of Puritan convictions. They had at least seven children in the next thirteen years; four of them died young.

During the Civil War, Watson began expressing his strong Presbyterian views. He had sympathy for the king, however. He was one of the Presbyterian ministers who went to Oliver Cromwell to protest the execution of Charles I. Along with Christopher Love, William Jenkyn, and others, he was imprisoned in 1651 for his part in a plot to restore the monarchy. Although Love was beheaded, Watson and the others were released after petitioning for mercy. Watson was formally reinstated to his pastorate in Walbrook in 1652. read more.... (with guide to modern reprints)