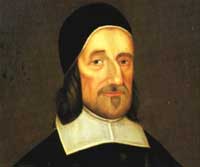 Warning: Baxter's views on justification and sanctification are somewhat controversial within the Calvinist tradition because his teachings could serve to undermine salvation by grace through faith. Our listing of Baxter here at Monergism does not constitute an endorsement of his theololgy or everything he has written. Joel Beeke said: "Baxter’s writings are a strange theological mix. He was one of a few Puritans whose doctrines of God’s decrees, atonement, and justification were anything but Reformed. Though he generally structured his theology along Reformed lines of thought, he frequently leaned towards Arminian thinking. He developed his own notion of universal redemption, which offended Calvinists, but retained a form of personal election, which offended Arminians."

Richard Baxter was born in 1615, in Rowton, near Shrewsbury, in Shropshire. He was the only son of Beatrice Adeney and Richard Baxter, Sr. Because of his father’s gambling habit and inherited debts, and his mother’s poor health, Richard lived with his maternal grandparents for the first ten years of his life. When his father was converted through “the bare reading of the Scriptures in private,” Richard returned to his parental home, and later acknowledged that God used his father’s serious talks about God and eternity as “the Instrument of my first Convictions, and Approbation of a Holy Life” (Reliquiae Baxterianae, 1:2-4).

Baxter’s education was largely informal; he later wrote that he had four teachers in six years, all of whom were ignorant and two led immoral lives. Nevertheless, he had a fertile mind, and enjoyed reading and studying. A prolonged illness and various books—particularly William Perkins’s Works—were the means God used to “resolve me for himself,” Baxter wrote (Reliquiae Baxterianae, 1:3-4). When he was fifteen, he was deeply affected by Richard Sibbes’s The Bruised Reed: “Sibbes opened more the love of God to me, and gave me a livelier apprehension of the mystery of redemption and how much I was beholden to Jesus Christ.” Subsequently, Ezekiel Culverwell’s Treatise of Faith (1623) “did me much good” (ibid., 1:4-5). read more....