The Belgic Confession of Faith (eBook) 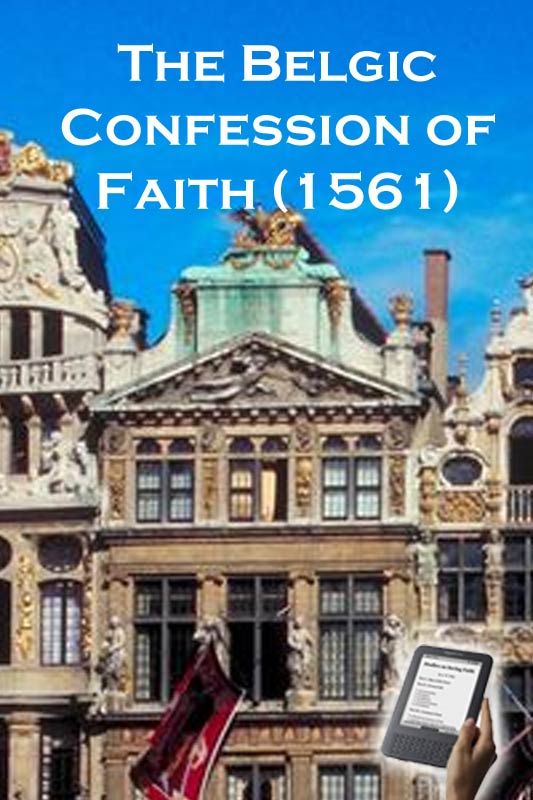 Often, three Protestant Christian documents are used together as the basis of Faith for many Churches, particularly Reformed Churches. The Belgic Confession is historically the first of the Three Forms of Unity (eBook), the others being the Heidelberg Catechism and the Canons of Dordt (or Dort). It is called the Belgic Confession because it was written in the southern Lowlands, now known as Belgium. Its chief author was Guido de Bräs, one of a number of itinerant preachers. Due to religious persecution, he died a martyr's death in 1567.

Philip II, of Spain, severely persecuted Reformed believers in the Lowlands as revolutionaries. The Belgic Confession was written by de Bräs in 1561 primarily as a testimony to the Spanish king to prove that the Reformed believers were not rebels, as was charged, but law-abiding citizens who professed only those doctrines which were the teachings of Holy Scripture. In 1562 a copy was sent to the Spanish king, accompanied by a petition for relief from persecution, in which the petitioners declared that they were ready to obey the government in all lawful things, although they would "offer their backs to stripes, their tongues to knives, their mouths to gags, and their whole bodies to fire," rather than deny the truth of God's Word.

The Confession and the petition had no effect on the Spanish authorities. However, it served well as a means of instruction of Reformed believers and thus became an expression of the faith of a people enduring suffering for Christ's sake. This is also reflected in its language. For while this confession follows the objective doctrinal order in its articles, its profoundly personal element is evident from the fact that every article begins with such words as, "We believe...," "We believe and confess...," or, "We all believe with the heart and confess with the mouth...."

In its composition, de Bräs availed himself to some extent of a confession of the Reformed churches in France, written chiefly by John Calvin, published two years earlier. The work of de Bräs, however, is not a mere revision of Calvin's work, but an independent composition. In 1566 the text of this confession was revised at a synod held at Antwerp. In the Netherlands it was at once gladly received by the churches, and it was adopted by national synods held during the last three decades of the sixteenth century. The text, not the contents, was revised again at the Synod of Dort (Dordrecht) in 1618-19 and adopted as one of the doctrinal standards to which all officebearers in the Reformed churches were required to subscribe. The confession stands as one of the best symbolical statements of Reformed doctrine. The translation presented here is based on the French text of 1619.

Sometimes known as the Walloon Confession, this was composed in 1561 by Guido de Bres as an apology for the persecuted band of Reformed Christians in the Lowlands who formed the so-called churches under the cross. Translated from French into Dutch in 1562, it gained synodical approval at Antwerp in 1566, at Wesel in 1568, at Emden in 1571, and definitively at Dordrecht in 1618. Together with the Heidelberg Catechism and the Canons of Dort, it provided the confessional foundation for all Dutch Reformed churches, and remains binding still today for members of the Christian Reformed Church in North America. De Bres, a courageous pastor to French-speaking communities in the Lowlands who was martyred at Valenciennes in 1567, modeled his work on the so-called Gallic Confession adopted for all French Reformed churches at Paris in 1559.

Like Calvin's Institutes, the text breaks down roughly into three parts: the truine God and the knowledge of him from Scripture (Arts. 1-9), Christ's work of creation and redemption (10-23), and the Spirit's work of sanctification in and through the Christian church (24-37), this last part subdivided again in Calvin. De Bres quoted Scripture liberally and often used the pronoun "we" to personalize this confession of faith. To distinguish his community from the feared and "detested" Anabaptists (with whom Catholics had often confused them), de Bres asserted the full humanity of Jesus Christ (18), the public rather than sectarian nature of the true church (28-29), infant baptism (34), and the God-given character of civil government (36).

As for the Catholics, who had brought the Inquisition down upon them, de Bres sought to find as many common beliefs as possible, especially the Trinity (1, 8, 9), the incarnation (10, 18, 19), and a catholic Christian church (27-29). But he also upheld distinctively Protestant emphases such as the unique authority of Scripture apart from the Apocrypha (3-7), the all-sufficiency of Christ's atoning sacrifice and intercession (21-23, 26), and the nature of good works (24) and of the two sacraments, Holy Baptism and the Holy Supper (34-35). Distinctively Reformed elements may be found in the articles on election (16), sanctification (24), the government of the church (30-32), and the Lord's Supper (35). There is no evidence that the Catholic authorities ever seriously read or were impressed by this little work, but Reformed Christians in the Lowlands quickly adopted it as their own confession of faith. 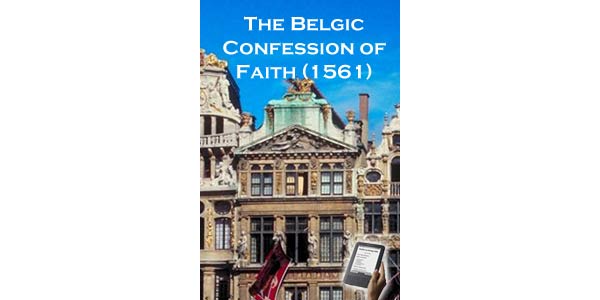