The Three Forms of Unity (eBook)

The Three Forms of Unity is a collective name for the Belgic Confession, the Canons of Dort, and the Heidelberg Catechism, which reflect the doctrinal concerns of Continental Calvinism and are accepted as official statements of doctrine by many of the Reformed churches. 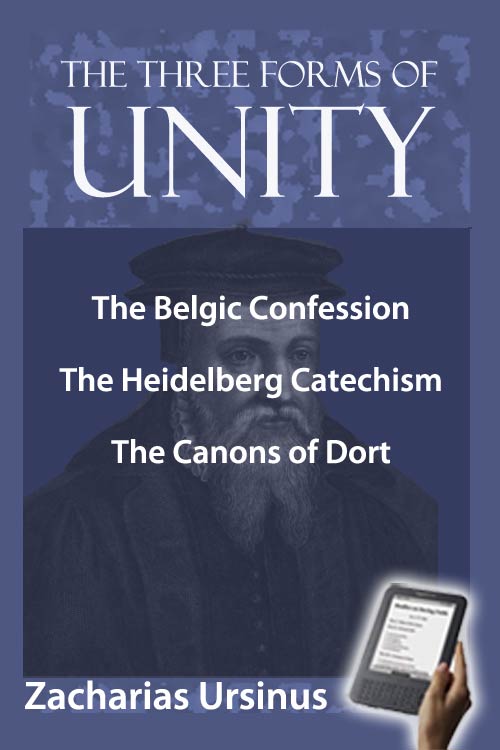 The Synod held at Dort

From 1618 to 1619 the Dutch government, on behalf of the Dutch Reformed Church, called and convened the Synod of Dort. Dutch delegates, along with twenty-seven Reformed representatives from eight other countries, met at this Synod of Dort, where they collectively summarized their views in what was called the "Canons of Dort."

This same Synod then added these Canons to two other documents, both of which were in common use by the Dutch Church at the time: the Heidelberg Catechism (1563) and the Belgic Confession (1561)

In so doing, the Synod sought:

to formalize their understanding of the biblical teachings on the Trinity, the Incarnation, predestination, justification, and the Church,
to allow members to gather together in unity around fundamental, shared beliefs,
to relegate certain non-essential ideas (political positions, educational platforms, etc.) to a lower status to prevent the churches from needlessly splitting.

The forms also provide a basis upon which ecumenical efforts can proceed based on whether a body accepts the essentials laid out in these forms.

the Catechism is written in a question-and-answer format to help explain biblical teaching to children and those new to the faith;
the Confession of Faith explains various biblical teachings;

The Heidelberg Catechism (1563), is a Protestant confessional document taking the form of a series of questions and answers, for use in teaching Reformed Christian doctrine. It was written in 1563 in Heidelberg, present-day Germany. It's original title in translates to Catechism, or Christian Instruction, according to the Usages of the Churches and Schools of the Electoral Palatinate. Commissioned by the prince-elector of the Electoral Palatinate, it is sometimes referred to as the "Palatinate Catechism." It has been translated into many languages and is regarded as one of the most influential of the Reformed catechisms.