Work Out Your Salvation (eBook) 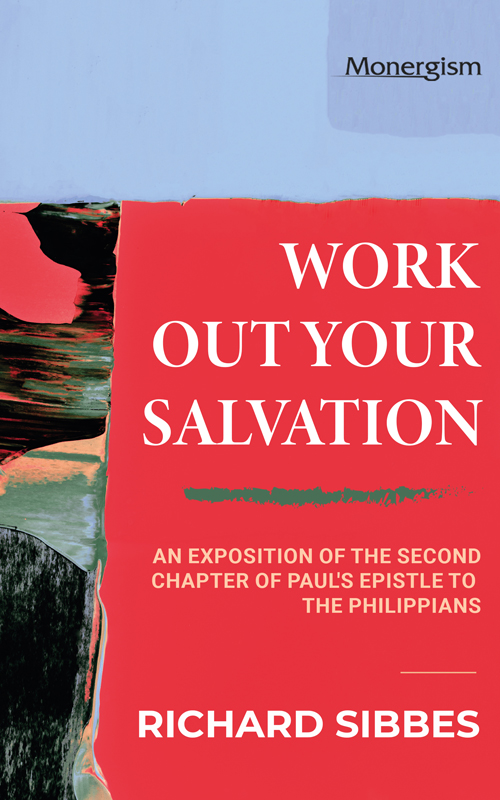 Wherefore, my beloved, as ye have always obeyed, not as in my presence only, but now much more in my absence, work out your salvation with fear and trembling. For it is God that worketh in you to will and to do according to his good pleasure.—PHIL. 2:12-13.

GOOD READER, to discourse the worth or commendations of the author (especially the pens of others having done sacrifice unto him in that kind), I judge it but an impertinency, and make no question, but that if I should exchange thoughts or judgments with thee herein, I should have but mine own again. The book itself, judiciously interpreted, is a volume of his commendation; and those, though from his own mouth, without any touch or tincture of vanity or self-affectation. The best sight of a man is to hear him speak—loquere, ut videam—the tongue being a voluntary and pleasant rack to the heart, to make it confess its treasure, whether it be good or evil. The diligence and care of those that have interposed for the preserving of what came from him in this way from perishing, have made the Christian world debtors unto them; and great pity it had been, that what he spake in public should have died in secret, and not be made seven times more public than speaking could do. The sparks of such fires as he kindled would have been ill quenched till the world had been further served with the light and heat of them.

It is true, heaps of books is one of the oppressions of the world, and the invention of the press hath been the exaltation of weakness and vanity amongst men, as well as of learning and knowledge. Yet know I no way better to retain the oppressed in this kind, than for men of worth and grown judgments and learning to appear in books also among the multitude. The time was when there were, as the apostle speaketh, 'gods many and lords many in the world,' 1 Cor. 8:5; when the world was pestered with devils of all sorts, instead of gods; but the only means of discharging the world of them, was the setting forth and preaching of the one true God and Lord Jesus Christ. So the furnishing the world with such books, as are books indeed, that breathe spirit and life, and are strong of heaven, speaking with authority and power to the consciences of men, is the only way to affamish the multitude of idol* books, and to have them desolate without a reader. It is, questionless, with men in respect of books, as it is in respect of men themselves (and indeed how there should be any difference between men and books I know not, the book being but the mind of a man, and the mind of a man being the man himself). Homo homini Deus, homo homini lupus.† There are men that are gods to men, and there are men that are wolves to men; and the more men-wolves there are in the world, the more men-gods there had need to be; otherwise the darkness would overcome the light, and make the earth as the shadow of death. So there are books that are laden with divine and true treasure; that will recompense the reader, his labour and pains sevenfold into his bosom; that will open his mouth and enlarge his heart to bless God, that hath given gifts unto men. Again, there are books also that will deal cruelly and deceitfully with men, consuming their precious time and opportunities; taking their money for that which is not bread. Now the more dreamers of dreams there are, there had need be the more that see visions. The weak, hungry, loose, and empty discourses the world is overlaid and encumbered withal, the more need it hath, by way of a counter recompence, of a full provision of solid and masculine writings, that may make men men, and not always children in understanding.

But I must remember that prefacing authors with long epistles is no employment of any sovereign necessity. Therefore I will no longer separate between thee and that which I desire to recommend unto thee more than anything of mine own. The blessing of Him that giveth the increase be upon the labour of him that planted and watered much in the courts of the house of his God; that though he be dead, he may yet speak to the edification of thine and of many souls.

Thine with a single heart and multiplied affections in the Lord,

TO THE RIGHT HONOURABLE SIR MAURICE ABBOT KNIGHT TO THE READER

DIRECTIONS TO THE READER