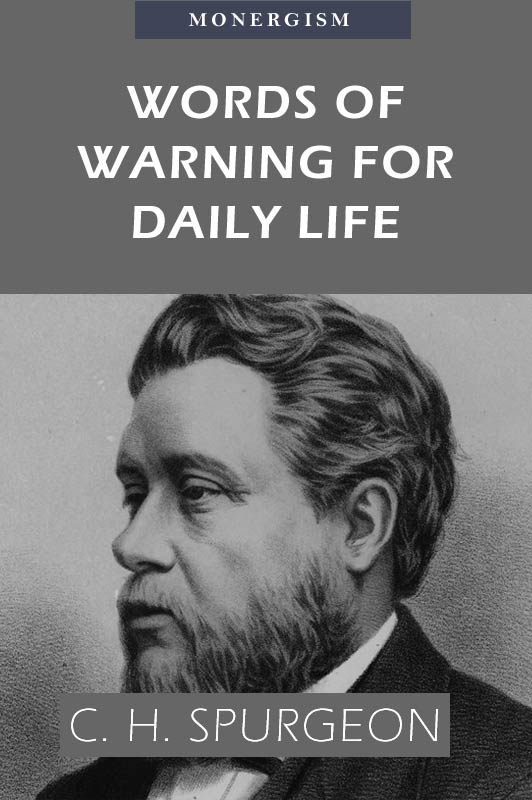 Fifteen short chapters which give advice in practical and spiritual matters. Includes Coming to Christ, Warnings to Certain Sinners, The Castle of Self, Halting Between Two Opinions and more.

Few people in history can be known by one name and have it ring true with their audience, and Charles Haddon Spurgeon is one of them. Over time, Spurgeon has become known and revered as the "Prince of Preachers". In the last 200 years he has been one of the most influential men for not only Preachers of the Gospel but for those who have not had the opportunity to hear and receive the Gospel message. He wrote tirelessly over his life, and WORDsearch Bible Software is committed to bring as many of Spurgeon's works as possible to you in electronic form.

The details of Charles Haddon Spurgeon's life still continue to amaze one and all. He was born in Kelvedon, Essex, England, on June 19, 1834. He accepted Christ in 1850 at the age of 15. By age 16, he preached his first sermon in 1851, and by age 20, Spurgeon had already preached over 600 sermons. In 1854, Spurgeon was asked to become pastor of the New Park Street Chapel, one of the sixth largest Baptist Churches in London.

The 1200 seat Chapel had previously been pastored by Dr. John Gill among others, and it carried a rich heritage with it. Although the Church was located in the midst of a filthy industrial district which was hard to reach, by 1855, it was obvious that the Church must start meeting at the Exter Hall while the Church building was expanded. When the expansion was completed, it still was too small and the congregation was forced to start meeting at the Surey Music Hall. By 1856, over 10,000 people would crowd the hall just to get a chance to hear Spurgeon preach a sermon.

To accommodate the growing number of people, the church voted to build a new sanctuary and to change the name of the Church to the Metropolitan Tabernacle. On March 31, 1861, the first service was held in the sanctuary, with a capacity of 5,600 was the largest non-conformist church in the world.

When Spurgeon came to New Park Street in 1854 it had a membership of just 232 members. By the end of 1891, 14,460 souls had been baptized and added to the church with a standing membership of 5311. Spurgeon ministered there for over 30 years. It is estimated that over his lifetime he preached to over 10,000,000 people.

THE GREAT WORLD-PRISON AND THE LIBERATOR

THOSE WHO TAKE NOT WARNING

HOW TO GET SAVING FAITH

RUNNING FOR A PURPOSE

THE COURSE OF THE WICKED

CHRIST THE SON OF MAN

THE KISS OF RECONCILIATION

"THOUGH ONE ROSE FROM THE DEAD"

THE CASTLE OF SELF

ON HALTING BETWEEN TWO OPINIONS

Naturalism Is Nonsense
R C Sproul
God Exalted, Man Humbled & Christ Glorified (eBook)
Jonathan Edwards
Horae Homileticae: Galatians to Ephesians (eBook)
Charles Simeon
Five Lessons Learned from Practicing Church Discipline
Tom Hicks
Simply Divine: Worshiping a God Who Lacks Nothing
Michael Reeves
Relentlessly Call Abortion What It Really Is
Jon Bloom
Social Justice (Series)
Dr. John MacArthur
Calvin's Four Rules of Prayer
Hal Wynn
Let God Speak: Hermeneutics
James White
Expressive Individualism is a Bust
Thaddeus Williams
Thy word is a lamp unto my feet, and a light unto my path
Thomas Manton
The Lord’s Prayer Teaches Us How to Pray Every Other Prayer
Kevin DeYoung
Sincere and Pure Devotion to Christ
Denny Burk
Glorifying God Includes Enjoying His Good Gifts
Stephen Kneale
Wisdom From Above: The Hope of Wisdom, Pt. 2 - Proverbs 2:1-22
Jeff Durbin
Wisdom From Above: The Hope of Wisdom - Proverbs 2:1-22
Jeff Durbin
Wisdom From Above: Wisdom's Last Laugh - Proverbs 1:20-33
Jeff Durbin
The Impossibility & Futility of Knowledge Apart From God - Proverbs 1:7
Jeff Durbin
Is God's Word only found in the Bible?
Nick Potts
The Foolish Virgins Only Desired to Look Like Wise Virgins
Ben Stahl
The Pitfalls and Possibilities of Being “Political”
Kevin DeYoung
7 Reasons Why the Gospel of John is So Special
Michael J Kruger
What We Miss When We Skip the Book of Ezra
Ryan Higginbottom
Why Romans Is the Greatest Letter Ever Written
Andrew Naselli
What the Early Church Can Teach Us about Living in This Strange New World
Carl Trueman
Why ‘Cool Church’ is no longer working with Millennials and Gen Z
Curated Resources
Judas’ Betrayal and the Providence of God
Josh Buice
The Treachery of Judas Iscariot and the Sovereignty of God over Sin
Sam Storms
Why Did Jesus Choose Judas?
John Piper
The Sovereignty of God and Christian Ministry
Richard Phillips
God’s Sovereignty in Salvation II
Michael J Kruger
God’s Sovereignty in Salvation I
Michael J Kruger
How Can a Good God Allow Evil?
Richard Belcher
Judas, Jesus and the Sovereignty of God - Part 2
Jeff Durbin
Judas, Jesus, and God's Sovereignty - Part 1
Jeff Durbin
Can You Be a Pharisee and Not Know It?
Keith Mathison
Transubstantiation: What Catholicism Teaches About the Supper
Reid Karr
Making Use of the Visible Signs: The Importance of the Sacraments in the Christian Life
Benjamin Glaser
Where Mercy and Justice Meet
Dave Harvey
Citizens and Exiles: Christians, the Church, and Culture
Scott Aniol
The Marxist Eschatology of Critical Race Theory
Darrell B. Harrison
What does it look like to make a disciple?
Steven J Lawson
How should a church engage in discipleship?
Voddie Baucham
Can you describe the Sovereignty of God? (YouTube)
James White
Kingdom Race Theology: Is This God’s Plan or Something Else?
Virgil Walker
Letters to the Seven Churches: To the Church in Ephesus (Revelation 2:1-7)
Kim Riddlebarger
Romans 8: Mortifying Sin
Stephen Unthank
Romans 8: Christ is Our Life
Stephen Unthank
Don’t Sacrifice Your Children
Paul Liberati
How Ordinary Worship Is both Reverent and Relevant
Curated Resources