The Wonderful Unity of the Bible Attests Its Divine Authorship by A. W. Pink 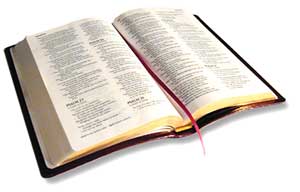 The manner in which the Bible has been produced argues against its unity. The Bible was penned on two continents, written in three languages, and its composition and compilation extended through the slow progress of sixteen centuries. The various parts of the bible were written at different times and under the most varying circumstances. Parts of it were written in tents, deserts, cities, palaces and dungeons, some parts in times of imminent danger and others in seasons of ecstatic joy. Among its writers were judges, kings, priests, prophets, partriarchs, prime ministers, herdsmen, scribes, soldiers, physicians, and fishermen. Yet despite these varying circumstances, conditions, and workmen, the Bible is one Book; behind its many parts there is an unmistakable organic unity. It contains one system of doctrine, one code of ethics, one plan of salvation, and one rule of faith.

Now if forty different men were selected today from such varying stations and callings of life as to include clerks, rulers, politicians, judges, clergy, doctors, farm laborers, and fishermen and each was asked to contribute a chapter for some book on theology or church government, when their several contributions were collected and bound together would there be any unity about them? Could that book truly be said to be one book, or would not their different productions vary so much in literary value, diction, and matter as to be merely a heterogeneous mass, a miscellaneous collection? Yet we do not find this to be the case in connection with God’s Book. Although the Bible is a volume of sixty-six books, written by forty different men, dealing with such a large variety of themes as to cover nearly the whole range of human inquiry, we find it is one Book, the Book (not the books), the Bible.

Furthermore, if we were to select specimens of literature from the third, fifth, tenth, fifteenth and twentieth centuries of the Christian era and were to bind them together, what unity and harmony should we find in such a collection? Human writers reflect the spirit of their own day and generation, and the compositions of men living amid widely differing influences and separated by centuries of time have little or nothing in common with each other. Yet although the earliest portions of the Sacred Canon date back to at least the fifteenth century, B. C., while the writings of John were not completed till the close of the first century, A. D., nevertheless, we find a perfect harmony throughout the Scriptures from the first verse in Genesis to the last verse in Revelation. The great ethical and spiritual lessons presented in the Bible, by whomever taught, agree.

The more one really studies the Bible the more one is convinced that behind the many human mouths there is One overruling, controlling Mind. Imagine forty persons of different nationalities, possessing various degrees of musical culture, visiting the organ of some cathedral, and at long intervals of time, and without any collusion whatever, striking sixty-six different notes, which when combined yielded the theme of the grandest oratorio ever heard. Would it not show that behind these forty different men there was one presiding mind, one great Tone Master? As we listen to some great orchestra, with its immense variety of instruments playing their different parts but producing melody and harmony, we realize that at the back of these many musicians there is the personality and genius of the composer. And when we enter the halls of the Divine Academy and listen to the heavenly choirs singing the Song of Redemption, all in perfect accord and unison, we know that it is God Himself who has written the music and put this song into their mouths.

We now submit two illustrations that demonstrate the unity of the Holy Scriptures. Certain grand conceptions run through the entire Bible like a cord on which are strung so many precious pearls. First and foremost among them is the Divine plan of redemption. Just as the scarlet thread runs through all the cordage of the British Navy, so a crimson aura surrounds every page of God’s Word.

In the Scriptures the plan of redemption is central and fundamental. In Genesis we have recorded the Creation and Fall of man to show

that he has the capacity for and is in need of redemption. Next we find the promise of the Redeemer, for man requires to have before him the hope and expectation of a Savior. Then follows an elaborate system of sacrifices and offerings, and these represent pictorially the nature of redemption and the condition under which salvation is realized. At the commencement of the New Testament we have the four Gospels and they set forth the basis of redemption, namely, the incarnation, life, death, resurrection and ascension of the Redeemer. Next comes the book of the Acts which illustrates again and again the power of redemption, showing that it is adequate to work its great results in the salvation of both Jew and Gentile. Finally, in the Revelation, we are shown the ultimate triumphs of redemption, the goal of salvation—the redeemed dwelling with God in perfect union and communion. Thus we see that though a large number of human media were employed in the writing of the Bible, yet their productions are not independent of each other, but are complementary and supplementary parts of one great whole. We see that one sublime truth is common to them all, namely, man’s need of redemption and God’s provision of a Redeemer. And the only explanation of this fact is that “all Scripture is given by inspiration of God.”

Secondly, among all the many personalities presented in the Bible, we find that one stands out above all others, not merely prominent but preeminent. Just as in the scene unveiled in the fifth chapter of the Revelation we find the Lamb in the center of the heavenly throngs, so we find that in the Scriptures also the Lord Jesus Christ is accorded the place that alone befits His unique Person. Considered from one standpoint the Scriptures are really the biography of the Son of God.

In the Old Testament we have the promise of our Lord’s incarnation and mediatorial work. In the Gospels we have the proclamation of His mission and the proofs of His messianic claims and authority. In the Acts we have a demonstration of His saving power and the execution of His missionary program. In the Epistles we find an exposition and amplification of His precepts for the education of His people. And in the Apocalypse we behold the unveiling or presentation of His Person and the preparation of the earth for His presence. The Bible is therefore seen to be peculiarly the Book of Jesus Christ. Christ not only testified to the Scriptures but each section of the Scriptures testify of Him. Every page of the Holy Book has stamped upon it His photograph and every chapter bears His autograph. He is its one great theme, and the only explanation of this fact is that the Holy Spirit superintended the work of each and every writer of the Scriptures.

The unity of the Scriptures is further to be seen in the fact that they are entirely free from any real contradictions. Though different writers often described the same incidents—as for example the four evangelists recording the facts relating to our Lord’s ministry and redemptive work—and though there is considerable variety in the narrations of these, yet there are no real discrepancies. The harmony existing between them does not appear on the surface, but, often, is discovered only by protracted study, though it is there nevertheless. Moreover, there is perfect agreement of doctrine between all the writers in the Bible. The teachings of the prophets and the teachings of the Apostles on the great truths of God’s righteousness, the demands of His holiness, the utter ruin of man, the exceeding sinfulness of sin, and the way of salvation are entirely harmonious. This might appear a thing easily effected. But those who are acquainted with human nature, and have read widely the writings of men, will acknowledge that nothing but the inspiration of the writers can explain this fact. Nowhere can we find two uninspired writers, however similar they may have been in their religious sentiments, who agree in all points of doctrine. Nay, entire consistency of sentiment is not to be found even in the writings of the same author at different periods. In his later years Spurgeon’s statement of some doctrines was much more modified than the utterances of his earlier days. Increasing knowledge causes men to change their views upon many subjects. But among the writers of Scripture there is the most perfect harmony, because they obtained their knowledge of truth and duty not by the efforts of study but from inspiration by the Holy Spirit of God.

When therefore we find that in the productions of forty different men there is perfect accord and concord, unison and unity, harmony in all their teachings, and the same conceptions pervading all their writings, the conclusion is irresistible that behind these men, superintending their work, controlling their minds, and guiding their hands, there was the mastermind of God Himself. Does not the unity of the Bible illustrate the Divine inspiration of the Bible and demonstrate the truth of its own assertion that “God…at sundry times and in divers manners spake in time past unto the fathers by the prophets” (Heb 1:1)?