A View of the Covenant of Works (eBook) 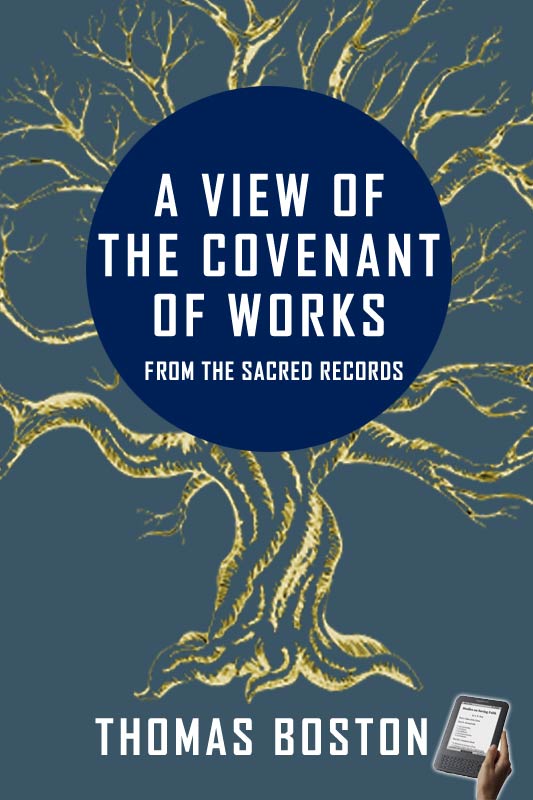 THE PARTIES IN THAT COVENANT, THE MAKING OF IT, ITS PARTS, CONDITIONARY AND PROMISSORY, AND MINATORY; OUR FATHER ADAM'S BREAKING OF IT; THE IMPUTATION OF THAT BREACH TO HIS POSTERITY; AND THE STATE OF MAN UNDER THAT BROKEN COVENANT, AND UNDER THE OURSE THEREOF, ARE DISTINCTLY CONSIDERED: TOGETHER WITH A PARTICULAR APPLICATION OF THE SUBJECT, FOR THE CONVICTION BOTH OF SAINTS AND SINNERS

MY design is, under the divine conduct, to open up unto you the two covenants of works and grace; and that because in the knowledge and right application of them the work of our salvation lies; the first covenant shewing us our lost state, and the second holding forth the remedy in Jesus Christ; the two things which, for the salvation of souls, I have always thought it necessary chiefly to inculcate. And I think it the more necessary to treat of these subjects, that, in these our declining days, the nature of both these covenants is so much perverted by some, and still like to be more so. And as I desire to lay a good foundation among you, while I have opportuaity; so I intreat all of you, and particularly the younger sort, to hearken and hear for the time to come. I begin with the first covenant to shew the nature of it from this text, "But of the tree of the knowledge," &c.

In which words we have an account of the original transaction between God and our first father Adam in paradise, while yet in the state of primitive integrity. In which the following things are to be remarked, being partly expressed and partly implied.

1. The Lord's making over to him a benefit by way of a conditional promise, which made the benefit a debt upon the performing of the condition. This promise is a promise of life, and is included in the threatening of death, thus; If thou eat not of the tree of the knowledge, &c., thou shalt live; even as in the sixth commandment, "Thou shalt not kill" is plainly implied, Thou shalt preserve thy own life and the life of others. And thus it is explained by Moses; Rom. 10:5, "The man which doth those things shall live by them." Besides, the license given him to eat of all the other trees, and so of the tree of life, which had a sacramental use, imports this promise.

2. The condition required to entitle him to this benefit; namely, obedience. It is expressed in a prohibition of one particular, "Of the tree of the knowledge of good and evil, thou shalt not eat of it." There was a twofold law given to Adam; the natural law, which was concreated with him, engraven on his heart in his creation. For it is said, Gen. 1:27, that "God created man in his own image;" compared with Eph. 4:24, "That ye put on the new man, which after God is created in righteousness and true holiness." This law was afterwards promulgated on Mount Sinai, being much obliterated by sin. Another law was the symbolical law, mentioned in the text, which, not being known by nature's light, was revealed to Adam, probably by an audible voice. By this God chose to try, and by an external action, exemplify his obedience to the natural law concreated with him. And this being a thing in its own nature altogether indifferent, the binding of it upon him by the mere will of the divine lawgiver, did clearly import the more strong tie of the natural law upon him in all the parts of it. Thus perfect obedience was the condition of this covenant.

3. The sanction, or penalty in case of the breach of the covenant, "In the day that thou eatest thereof thou shalt surely die." For if death was entailed on a doing of that which was only evil, because it was forbidden; much more might Adam understand it to be entailed on his doing of anything forbidden, because evil, or contrary to the nature or will of God, the knowledge of which was impressed on his mind in his creation. The sanction is plainly expressed, not the promise; because the last was plainly enough signified to him in the tree of life, and he had ample discoveries of God's goodness and bounty, but none of his justice, at least to himself. And it does not appear that the angels were yet fallen; or if they were, that Adam knew of it.

4. Adam's going into the proposal, and acceptance of those terms, is sufficiently intimated to us by his objecting nothing against it. Thus the Spirit of God teaches us Jonah's repentance and yielding at length to the Lord, after a long struggle, chap. 4:11; as also Adam's own going into the covenant of grace, Gen. 3:15. Besides, his knowledge could not but represent to him how beneficial a treaty this was; his upright will could not but comply with what a bountiful God laid on him; and he, by virtue of that treaty, claimed the privilege of eating of the other trees, and so of the tree of life, as appears from Eve's words, Gen. 3:3, "But of the fruit of the tree which is in the midst of the garden, God hath said, Ye shall not eat of it, neither shall ye touch it, lest ye die."

Now it is true, we have not here the word covenant; yet we must not hence infer, that there is no covenant in this passage, more than we may deny the doctrine of the Trinity and sacraments, because those words do not occur where these things are treated of in scripture, nay, are not to be found in the scripture at all. But as in those cases, so here we have the thing; for the making over of a benefit to one, upon a condition, with a penalty, gone into by the party it is proposed to, is a covenant, a proper covenant, call it as you will.

PART I.—OF THE TRUTH AND NATURE OF THE COVENANT OF WORKS

PART II.—OF THE BREACH OF THE COVENANT OF WORKS

PART III.—OF THE IMPUTATION OF ADAM'S FIRST SIN TO HIS POSTERITY

PART IV.—SECT. I. THE STATE OF MAN UNDER THE BROKEN COVENANT OF WORKS

PART IV. SECT. II.—THE MISERY OF THOSE WHO ARE UNDER THE BROKEN COVENANT OF WORKS 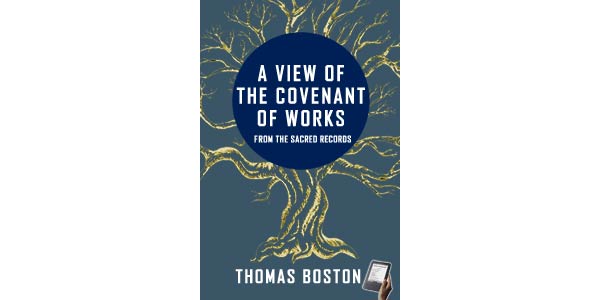