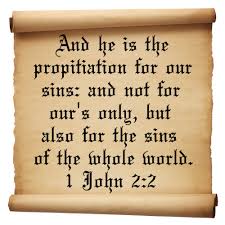 Those who have read my interview with John Hendryx (here) will know something of my struggle in coming to understand and appreciate the doctrines of grace. One of the biggest hurdles I encountered was my traditional understanding of 1 John 2:2. It acted much like a roadblock in my thinking, preventing me traveling along the road known as reformation highway for a long period of time. How are we to understand the verse then?

Let me start by affirming that scripture is explicit in saying that Jesus died:

for His friends ("Greater love has no one than this, that someone lays down his life for his friends. You are My friends if you do what I command you." - John 15:13-14;

Indeed, as God allows us to gain a glimpse into the future, Revelation 5:9 reveals the song of the throngs of heaven as they sing to the Lamb upon His throne, "And they sang a new song, saying, "Worthy are You to take the scroll and to open its seals, for You were slain, and by Your blood You ransomed people for God from every tribe and language and people and nation." Notice that it does not say that He ransomed everybody in every tribe, etc., but that He ransomed people for God from every tribe, tongue, people and nation.

Yet at least at first glance, 1 John 2:2 seems to strongly deny this idea that Jesus' death was designed for a particular people. The verse states, "He is the propitiation for our sins, and not for ours only but also for the sins of the whole world."

I don't believe that scripture contradicts itself. That is in fact why we are told to study the word of God in order that we might rightly divide it (2 Tim. 2:15) rather than simply throw up our hands saying a particular verse contradicts others on the same subject. "All Scripture is God breathed" (2 Tim. 3:16) and because there is one Divine Author of Scripture who does not contradict Himself, I am convinced that hard work and careful study will eliminate apparent contradictions.

1. Consider the Author - who wrote the book? (what was his background, language, culture, vocation, concerns, education, circumstance, what stage of life?)

2. Consider the Audience (why was the book written? who was the audience? what would these words have meant to its original recipients?)

My friend, Dr. James White once wrote, "Remember when you were in school and you had to take a test on a book you were assigned to read? You studied and invested time in learning the background of the author, the context in which he lived and wrote, his purposes in writing, his audience, and the specifics of the text. You did not simply come to class, pop open the book, read a few sentences, and say, "Well, I feel the author here means this." Yet, for some odd reason, this attitude is prevalent in Christian circles. Whether that feeling results in an interpretation that has anything at all to do with what the original author intended to convey is really not considered an important aspect. Everyone, seemingly, has the right to express their "feelings" about what they "think" the Bible is saying, as if those thoughts actually reflect what God inspired in His Word. While we would never let anyone get away with treating our writings like this, we seem to think God is not bothered, and what is worse, that our conclusions are somehow authoritative in their representation of His Word."

With this in view, John writes of Jesus Christ being "the propitiation for our sins; and not for ours only (Hebrews), but also for the whole world (the Gentiles)."

A third principle I mentioned in the article relates to the concept of considering the author's context. This refers to looking at all of a person's writings - John's writings, Paul's writings, Luke's writings, etc. When we look elsewhere in John's writings we notice in his Gospel an exact parallel in John's use of words, which gives us a great deal of insight as to what he (John) was referring to.

In John's Gospel, chapter 11, verses 51-52, John wrote these words, "he prophesied that Jesus would die for the nation, and not for the nation only, but also to gather into one the children of God who are scattered abroad."

When we see this in chart form, the parallel with 1 John 2:2 is easy understood:

Dr. Phil Johnson (who provided this helpful chart) writes, "There is little doubt that this is how John's initial audience would have understood this expression. "The whole world" means "people of all kinds, including Jews, Gentiles, Greeks, Romans, and whatnot" as opposed to "ours only" i.e., the Jewish nation. What the apostle John is saying in the John 11 passage is particularly significant: Christ died so that he might gather "the children of God" the elect, from the whole world."

I believe therefore that rather than undermining the case for Christ's death for His elect sheep, 1 John 2:2 actually affirms it. When we understand the verse in its Johannine context (the writings of the Apostle John) then the correct interpretation becomes very clear.

Note: I think a much stronger exegetical case can be made for particular redemption. The general atonement position simply does not hold up under scrutiny and the few texts they point to when  upholding their position are easily refuted when both the immediate and global context are taken into account.

Not to mention the logical problems there are with universal redemption. Universal redemption must be denied if Jesus knows all things. For if Christ knows all things to come (and He does), he certainly knew, when he died, that there were certain men that would never benefit from His death. And therefore, it is impossible that He should have died with an intent to redeem them.

Related Resources:
“Problematic Texts” for Definite Atonement in the Epistles by Thomas R Schreiner
2 Peter 2:1 and Universal Redemption by Simon Escobedo III
For Whom Did Christ Die? PDF by Tom Wells