The Typology of Scripture (eBook) 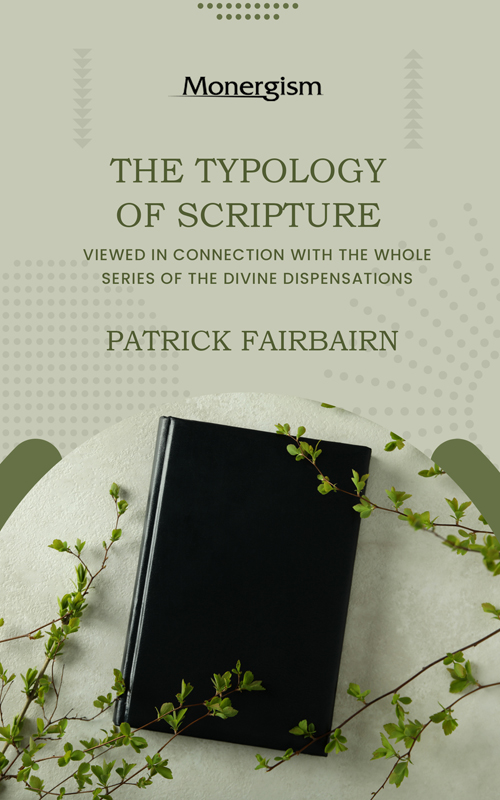 This classic work examines typology not only as a biblical and theological subject but also in its connection with Christian doctrines and dispensations. Two volumes in one. The following review article is from the Westminster Theological Journal 15/2 (May 53), p. 187. It refers to the reprint of Fairbairn’s work published by Zondervan in 1952.

To serious students of the Scripture Fairbairn’s Typology has long been a standard work. For a sane, sober, and profound exposition of the relation that subsists between the Old and the New Dispensations this book has remained unsurpassed since its appearance nearly a century ago. It is one of those really great works that have stood the test of time and can be called essential in the ministerial library. Fairbairn was one of the giants of the Free Church of Scotland who, along with William Cunningham, George Smeaton, James Buchanan and other scholars, produced a quantity and quality of Reformed literature, that has never been duplicated in such a short space of time in one country. He himself was principal of the Free Church College in Glasgow, after having served three charges as pastor.

This work is really divided into two volumes, which in the present reprint have been bound together. The print has been enlarged somewhat over the older editions, which eases the strain on the reader’s eyes, especially in the very valuable appendices. The entire work is divided into three ‘books’ of rather unequal length. The second volume is devoted to the third ‘book’ and in 470 pages discusses the types found under the Mosaic dispensation. Fairbairn treats first the typical significance of the ‘historical transactions’ such as the bondage in Egypt, the deliverer Moses, the deliverance itself, and the wilderness wandering. Then the bulk of the volume is given over to a detailed exposition of the typical symbolism of the law, the tabernacle, and the sacrifices. For the busy minister who is looking for a clear, thorough, and satisfying presentation of the Levitical sacrifices, this section is well worth the price of the whole book. And for the student who is wrestling with the critical problems involved in the interpretation of the Old Testament, the discussion beginning on page 278 will set the problem forth succinctly and with the reverent and scholarly replies. It is significant that a reviewer in the pages of this Journal recently referred his readers to Fairbairn’s Typology in reply to the claims of a modern theological work that the Levitical sacrifices had efficacy only for unwitting or ceremonial sins (cf. the issue for May 1952, p. 172).

The first volume sets forth the principles of Scripture typology and their application to the primeval and patriarchal dispensations. It is the first part of this section that is especially important, as here we find a quick rebuff to the facile solution that sees no ‘type’ except that which is specifically mentioned in the New Testament. Fairbairn defends himself by appealing to the sister study of prophecy, where, says he, ‘a part only ... of the prophecies which refer to Christ and His kingdom have been specially noticed and interpreted by the pen of inspiration’ in the New Testament (p. 21). Why then demand a special notice of each type? On the contrary, the types that are noted are singled out ‘simply as examples ... taken from a vast storehouse, where many more were to be found’ (p. 22). On the other hand, he takes issue with those who discover types everywhere, but only of a ‘superficial and outward kind’ (p. 20).

The minister and Bible student who makes a careful study of this book cannot help but have his knowledge of the Scriptures immeasurably increased. The appendices, too, will no doubt provoke much interest, especially the one entitled, ‘Does the Original Relation of the Seed of Abraham to the Land of Canaan Afford any Ground for Expecting their Final Return to it?’ (Vol. I, pp. 415 ff.). It is to be regretted that this work goes no farther than the early historical and legal books and does not take up the prophets. We may hope that a good response to this reprint will encourage the republication of Fairbairn’s other great work on Prophecy.

Preface to The Fourth Edition.

Book First.— Inquiry into The Principles of Typical Interpretation, with a View Chiefly to The Determination of The Real Nature and Design of Types, and The Extent to which they Entered into God's Earlier Dispensations.

—Chapter First.—Historical and Critical Survey of the Past and Present State of Theological Opinion on The Subject.

- Chapter Second.—The Proper Nature and Province of Typology.—1. Scriptural Use of The Word Type Comparison of This with The Theological Distinctive Characteristics of a Typical Relationship, Viewed with Respect to The Religious Institutions of The Old Testament.

- Chapter Third —The Proper Nature and Province of Typology—2. The Historical Characters and Transactions of The Old Testament, Viewed as Exemplifying The Distinctive Characters of a Typical Relationship—Typical Forms in Nature Necessity of The Typical as a Preparation for The Dispensation of The Fulness of Times.

—Chapter Fourth.—The Proper Nature and Province of Typology—3. God's Work in Creation, how Related to The Incarnation and Kingdom Of Christ.

—Chapter Fifth.—Prophetical Types, or The Combination of Type with Prophecy—Alleged Double Sense of Prophecy.

—Chapter Seventh.—The Place Due to The Subject of Typology as A Branch of Theological Study, and The Advantages Arising from its Proper Cultivation.

—Chapter First. The Divine Truths Embodied in The Historical Transactions on which The First Symbolical Religion for Fallen Man was Based.

—Chapter Sixth.—Typical Things in History During The Progress of The First Dispensation.

—Section Second.—Noah and The Deluge.

—Section Third.—The New World and its Inheritors The Men of Faith.

—Section Fourth.—The Change in The Divine Call from The General to The Particular—Shem, Abraham.

—Section Fifth.—The Subjects and Channels of Blessing—Abraham and Isaac, Jacob and The Twelve Patriarchs.

—Section Sixth.—The Inheritance Destined for The Heirs of Blessing.

—Appendix D.—Does The Original Relation of The Seed of Abraham to The Land of Canaan afford any Ground for Expecting their Final Return to it?—P. 405.

—Book Third.—Chapter First.—The Divine Truths Embodied in The Historical Transactions connected with The Redemption from Egypt, Viewed as Preliminary to The Symbolical Institutions Brought in by Moses.

—Section Second.—The Deliverer and His Commission.

—Chapter Second.—The Direct Instruction given to The Israelites before The Erection of The Tabernacle, and The Institution of its Symbolical Services The Law.—Section First.—What Properly, and in The Strictest Sense, Termed The Law, Viz., The Decalogue—Its Perfection and Completeness Both as to The Order and Substance of its Precepts.

—Section Second.—The Law continued—Apparent Exceptions to its Perfection and Completeness as The Permanent and Universal Standard of Religious and Moral Obligation—Its References to The Special Circumstances of The Israelites, and Representation of God as Jealous.

—Section Fourth.—What The Law could not do—The Covenant Standing and Privileges of Israel before it was given.

—Section Sixth.—The Relation of Believers under The New Testament to The Law—In what sense they are Free from it—And why it is No Longer Proper to Keep The Symbolical Institutions connected with it.

—Chapter Third.—The Religious Truths and Principles Embodied in The Symbolical Institutions and Services of The Mosaic Dispensation, and Viewed in their Typical Reference to the Better Things to come.—Section First.—Introductory on The Question why Moses was instructed in The Wisdom of The Egyptians, and what Influence this might be expected to exercise on his Future Legislation.

—Section Second.—The Tabernacle in its General Structure and Design.

.—Section Fourth.—The Tabernacle in its Several Divisions—1. The Forecourt, with its Two Articles, The Laver and The Altar of Burnt-Offering—Sacrifice by Blood in its Fundamental Idea and Ritual Accompaniments (Choice of The Victims, Imposition of Hands, and Sprinkling of The Blood).

—Section Fifth.—The Different Kinds of Offerings connected with The Brazen Altar in The Court of The Tabernacle—Sin-Offerings—Trespass-Offerings—Burnt-Offerings—Peace or Thank-Offerings—Meat-Offerings.

—Section Seventh.—The Most Holy Place, with its Furniture, and The Great Annual Service connected with it on The Day of Atonement.

—Section Second.—The Theory, Working, and Development of the Jewish Theocracy.

—Section Eighth.—Special Rites and Institutions Chiefly Connected with Sacrifice—The Ratification of The Covenant the Trial and Offering of Jealousy—Purgation from an Uncertain Murder—Ordinance of the Red Heifer—The Leprosy and its Treatment—Defilements and Purifications Connected with Corporeal Issues and Child-Birth—The Nazarite and His Offerings—Distinctions of Clean and Unclean Food.

—Appendix C.—P. 302.—Supplementary Remarks on the Subject of Sacrifice by Blood.