A Treatise of Vocations (eBook) 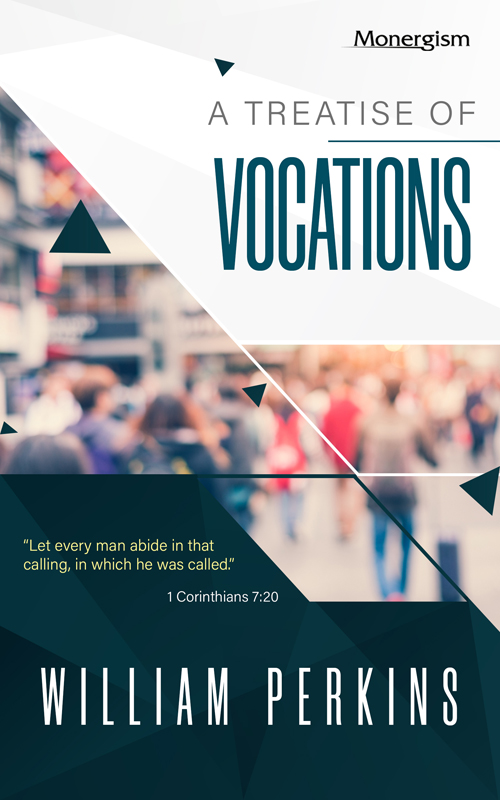 I mean to treat this point of vocation or calling — considering that few men rightly know how to live and go on in their callings, so as they may please God. Therefore to proceed in order in speaking about this point, First I will show what Vocation or Calling is. Secondly I will set down the parts and kinds of it. Thirdly, the holy and lawful use of every man’s particular calling; all of which are in some sort touched on in the words of my text.

A vocation or calling is a certain kind of life, ordained and imposed on man by God, for the common good.

Now, in every calling we must consider two causes. First, the efficient and author of it. Secondly, the final and proper end of it. The author of every calling is God Himself; and therefore Paul says, “As God has called every man, let him walk,” verse 17. And for this reason, this order and manner of living in this world is called aVocation, because every man is to live as he is called by God. For look as it is in the military camp: the General appoints to every man his place and standing; one place for the horseman and another for the footman; and to every particular soldier likewise: his office and standing in which he is to abide against the enemy, and to live and die in that place — it is even so in human societies. God is the General, appointing to every man his particular calling, and as it were, his standing. And in that calling He assigns to him his particular office; in performance of this office he is to live and die. And just as in a camp, no soldier can depart his standing without the leave of the General, nor more may any man leave his calling unless he receives liberty from God. Again, in a clock, made by the art and handiwork of man, there are many wheels, and every one has its several motions — some turn this way, some that way, some go softly, some apace — they are all ordered by the motion of the watch. Behold here a notable resemblance to God’s special providence over mankind, which is the watch of the great world, allotting to every man his motion and calling; and in that calling, his particular office and function. Therefore what I say is true, that God Himself is the author and beginning of callings.

The Epistle Dedicatory 1Cor. 7.20 Let every man abide in that calling, in which he was called.

3. The Right Use of Callings

1. Good choice of a calling

2. Good entrance into a calling

3. Good continuance in a calling.

I. The works of our calling must have three qualifications.

1. Search out what are the proper works of our own callings

2. The second property is that the works of our callings must be profitable

3. The third condition of our actions is that they must be necessary.

II. The works of our calling must be done in a particular manner.

1. To do a work in Holiness

A. The vices to be avoided in the works of men’s callings are especially two:

B. The virtues required of us in the practice of our callings are many, but two especially:

Three things that affect it:

4. Good ending of a calling.

1. The Resigning of a calling.

A. The timing of it.

B. The manner of it.

2. The Accounting of a calling.

There are four things required in this accounting:

I. Presenting all persons before the tribunal of Christ.

II. Manifesting all the works they have done.

IV. Giving according to each man’s works.

First, we must draw up the bill of our receipts and expenses.

Second, consider whether we will be able to settle our account with God

Third, we must cling to Christ