A Treatise of Vocations 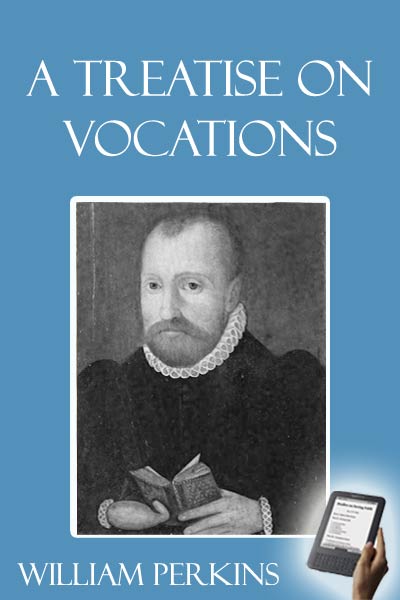 I mean to treat this point of vocation or calling — considering that few men rightly know how to live and go on in their callings, so as they may please God. Therefore to proceed in order in speaking about this point, First I will show what Vocation or Calling is. Secondly I will set down the parts and kinds of it. Thirdly, the holy and lawful use of every man’s particular calling; all of which are in some sort touched on in the words of my text.

A vocation or calling is a certain kind of life, ordained and imposed on man by God, for the common good.

Now, in every calling we must consider two causes. First, the efficient and author of it. Secondly, the final and proper end of it. The author of every calling is God Himself; and therefore Paul says, “As God has called every man, let him walk,” verse 17. And for this reason, this order and manner of living in this world is called aVocation, because every man is to live as he is called by God. For look as it is in the military camp: the General appoints to every man his place and standing; one place for the horseman and another for the footman; and to every particular soldier likewise: his office and standing in which he is to abide against the enemy, and to live and die in that place — it is even so in human societies. God is the General, appointing to every man his particular calling, and as it were, his standing. And in that calling He assigns to him his particular office; in performance of this office he is to live and die. And just as in a camp, no soldier can depart his standing without the leave of the General, nor more may any man leave his calling unless he receives liberty from God. Again, in a clock, made by the art and handiwork of man, there are many wheels, and every one has its several motions — some turn this way, some that way, some go softly, some apace — they are all ordered by the motion of the watch. Behold here a notable resemblance to God’s special providence over mankind, which is the watch of the great world, allotting to every man his motion and calling; and in that calling, his particular office and function. Therefore what I say is true, that God Himself is the author and beginning of callings.

The Epistle Dedicatory
1Cor. 7.20 Let every man abide in that calling, in which he was called.
1. General Calling
2. Personal Calling
General rules for Personal Callings
Two Sorts of Personal Callings
3. The Right Use of Callings
1. Good choice of a calling
2. Good entrance into a calling
3. Good continuance in a calling.
I. The works of our calling must have three qualifications.
1. Search out what are the proper works of our own callings
2. The second property is that the works of our callings must be profitable
3. The third condition of our actions is that they must be necessary.
II. The works of our calling must be done in a particular manner.
1. To do a work in Holiness
A. The vices to be avoided in the works of men’s callings are especially two:
(1) Covetousness
(2) Injustice.
B. The virtues required of us in the practice of our callings are many, but two especially:
(1) Faith.
(2) Love.
2. To do a work in Constancy.
Three impediments to Constancy:
A. Ambition.
B. Envy.
C. Impatience.
Three things that affect it:
A. Helps.
B. Vacation.
C. Changes.
4. Good ending of a calling.
1. The Resigning of a calling.
A. The timing of it.
B. The manner of it.
2. The Accounting of a calling.
There are four things required in this accounting:
I. Presenting all persons before the tribunal of Christ.
II. Manifesting all the works they have done.
III. Examining these works.
IV. Giving according to each man’s works.
Preparing to make a good account.
First, we must draw up the bill of our receipts and expenses.
Second, consider whether we will be able to settle our account with God
Third, we must cling to Christ

Augustine, Aurelius - Bishop of Hippo 354-430 (Works)
St Augustine
The Grace and Duty of Being Spiritually Minded - Modernized (eBook)
John Owen
The Method of Grace
George Whitefield
Ransomed! - The Bible's Teaching on Redemption (3-Part MP3 Series)
Dick Lucas
The Precious Blood of Christ (4-Part MP3 Series)
Dick Lucas
I Want to be an Intercessor (MP3 Series)
Dick Lucas
Ruin and Redemption (.pdf)
Jay Todd
An Introduction to Covenant Theology
Jay Todd
Postimillennialism: An Exposition and Critique
Dean Davis
Through Baca's Vale: Daily Words for Zion's Wayfarers (eBook)
J C Philpot
10 Issues the Gospel Solved in the Corinthian Church
Andy Naselli
4 Ways Christians Can Navigate Cultural Confusion around Gender in the Coming Decade
Carl Trueman
Communicable Attributes: What Is the Mercy of God?
Persis Lorenti
Injustice and Social Justice
William P. Farley
Communicable Attributes: Grace: Its Scope and Effectiveness
David Smith
The Great Reset and the Rise of the Radical Technocrats
Bill Muehlenberg
What Is the Basis For Equal Rights?
Greg Koukl
Thirty-one Meditations on Christ (eBook)
Robert Hawker
Thirty-One Meditations on the Gospel (eBook)
Robert Hawker
The Eschatology of the New Testament (eBook)
Geerhardus Vos
Keep your heart with all vigilance - Proverbs 4:23
H.B. Charles Jr.
Book Review: The Rise and Triumph of the Modern Self: Cultural Amnesia, Expressive Individualism, and the Road to Sexual Revolution
Bobby Jamieson
Is the Book of James Really Christian?
Michael J Kruger
Forgetful Believers
Tom Ascol
Creeds, Confessions and Cage Stagers
J V Fesko
Holiness: Its Nature, Hindrances, Difficulties, and Roots (ebook)
J C Ryle
The Goal of Theology
Keith Mathison
Hesed
Ligonier Ministries
Faith Alone
J V Fesko
Science Confirms Biblical Creation
Jason Lisle
God Never Sweats it: Impassibility
Stephen Unthank
What Do I Do during the Lord’s Supper?
Aaron L. Garriott
JRR Tolkien On The Danger Of Centralized Political Power
Zachary Yost
Love for the Lord's Day
Joel R Beeke
Abortion’s grisly centennial
World Magazine
A Direct Threat to Christian Education
Albert Mohler
How Christians Survived Communism in Europe
Rod Dreher
How ‘Evangelical’ Is The Evangelical Movement?
Dr. John MacArthur
The Lamb of God
B B Warfield
The Glorified Christ
B B Warfield
Why the Lord Suffereth Sin to Remain in the Regenerate?
Thomas Boston
Where hath Sin its Lodging Place in the Regenerate?
Thomas Boston
Your Citizenship Isn’t In America
Samuel Sey
How the 2020 Presidential Election Helps Us Understand the Formation of the New Testament Canon
Michael J Kruger
Is Jeremiah 29:11 a Promise for Us Today?
Wyatt Graham
‘My Mind Is Made Up!’
Bill Muehlenberg
How to Talk about God in a Skeptical Age
Joshua D. Chatraw
The Rise and Triumph of the Modern Self
Carl Trueman
Podcast: Making Sense of Transgenderism and the Sexual Revolution (MP3)
Carl Trueman
A Mistake Christians Make regarding the LGBTQ+ Movement
Carl Trueman