A Treatise on Justification and Regeneration (eBook) 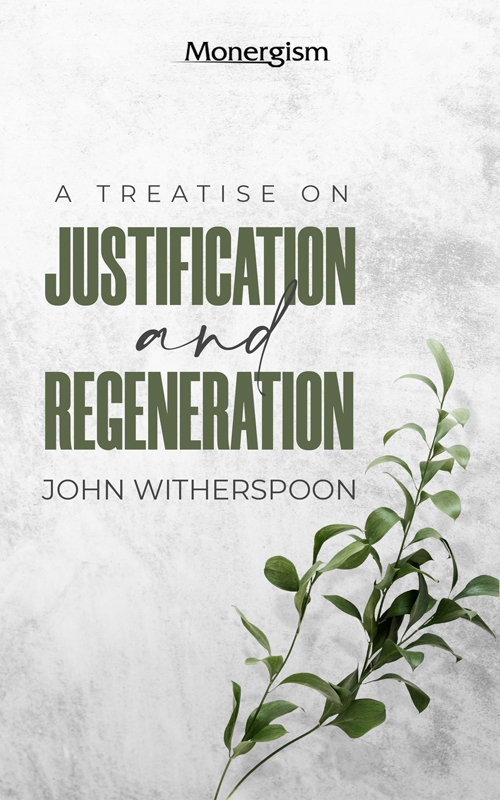 “This work has always been regarded as one of the ablest Calvinistic expositions of that doctrine in any language. I hope you approve Mr. Witherspoon's books. I think his Treatise on Regeneration is the best I have seen upon this important subject” - John Newton

WHEN Christ our Saviour was about to go to his Father, he told his disciples, If the world hate you, ye know that it hated me before it hated you. If ye were of the world, the world would love his own: but because ye are not of the world, but I have chosen you out of the world, therefore the world hateth you. I am persuaded, that by this, he did not only intend to forewarn the twelve of the offence which that generation would take at the ignominy of the cross, but also to intimate, that the case would be the same in all ages; that his doctrine would meet with great resistance and opposition, and that the temper and character of his real disciples would be very different from the spirit that would generally prevail in the world. This hath been continually verified in experience. For as many in the highest stations, and of highest repute for wisdom in the world, did set themselves against the gospel at its first publication, so even where there is a nominal profession of it, there is still an opposition to its doctrines, in their simplicity and purity, by the world, that is to say, those who have most sway in it, who are the most passionate admirers of its fashions, and the most assiduous prosecutors of its honors and pleasures.

It may be also observed, that there is sometimes, perhaps even generally, a sovereignty of divine providence in the choice of the instruments employed in spreading the gospel. As, at first, twelve illiterate fishermen were chosen; so, often since that time, the weakest and most unlikely have been pitched upon, that our faith might not stand in the wisdom of men, but in the power of God. Hence it frequently happens, that it is not only difficult to make men believe the gospel, but even to persuade them to hear it. They are apt to despise and deride the message, because of the meanness of the messenger, or the homeliness of the terms in which it is delivered. This is particularly the case with the present age. From a certain love of ease, and luxury of mind, they despise and trample upon all instructions, which have not something pleasing and insinuating in their dress and form.

You, Sir, are one of those happy few, who have been willing to consecrate the finest natural talents to the service of Christ in the gospel, and are not ashamed of his cross. You have been able to procure attention upon some subjects, from many who would hardly have given it to any other writer. This hath made me observe with particular attention, the effect of your last performance, Theron and Aspasio, the character given to it, and the objections raised against it. And I have always found, that the most specious and plausable objection, and that most frequently made against the doctrine of justification by imputed righteousness, has been in this case, as indeed usually before, that it loosens the obligations to practice. This is what I have particularly applied myself to refute in the following essay, because I have rarely observed it done distinctly, and at full length, in any writer. And I have addressed it to you, as a testimony of my esteem of your excellent and useful writings, as a public declaration of my espousing the same sentiments as to the terms of our acceptance with God, and my ambition of contributing some small assistance to the support of the same glorious cause. It was also no small inducement to it, that thereby it might appear to all, that no external distinctions, or smaller differences, ought to be any hindrance to a cordial esteem and affection among the sincere servants of our common Master.

The greatest part of what follows was first delivered in two sermons; but it is now thrown into the form of an essay, lest the despised title of a sermon should offend some, and that it might the better admit of several additions, both in the body of the piece, and in the notes, which could not have been so properly delivered from a pulpit. Some of these regard the philosophical principles which have of late been published among us, of which I propose, in a short time, a much fuller discussion, as there is no way in which the truths of the gospel are more perverted than by what the apostle Paul calls Philosophy and vain deceit, and oppositions of science falsely so called.

ESSAY ON THE CONNECTION BETWEEN THE DOCTRINE OF JUSTIFICATION BY THE IMPUTED RIGHTEOUSNESS OF CHRIST, AND HOLINESS OF LIFE

An Essay on Justification

CHAP. I: Some general observations on the metaphor used by the apostle John, Except a man be born again; and the same or similar expressions to be found in other parts of the word of God

-- SECT. I.—From this expression, Except a man be born again, he cannot see the kingdom of God, we may learn the greatness of that change which must pass upon every child of Adam, before he can become an heir of life

-- SECT. II.—This expression, Except a man be born again, and other similar expressions, imply that the change here intended is not merely partial, but universal

-- SECT. III.—From these words, except a man be born again, he cannot see the kingdom of God, and other similar expressions in the holy Scriptures, we may infer that the change here intended is not merely external and imperfect, but inward, essential and complete

-- SECT. IV.—From this metaphor, except a man be born again, he cannot see the kingdom of God, and other parallel expressions in the holy Scriptures, we may learn that the change here intended is supernatural

CHAP. II: In which is shewn wherein this change doth properly and directly consist, and what are its principal evidences and fruits

-- SECT. III.—The effects of Regeneration; with some of the principal evidences of its sincerity

-- SECT. IV.—A more particular inquiry into what properly constitutes the sincerity of the change

CHAP. III: Of the steps by which this change is accomplished

-- SECT. I.—There must be a discovery of the real nature of God

-- SECT. II.—There must be a discovery of the infinite glory of God

-- SECT. III.—There must be a conviction of sin and danger

-- SECT. IV.—Of the degree of sorrow for sin in true penitents

-- SECT. V.—Acceptance of salvation through the cross of Christ

-- SECT. VII.—How the Christian is governed in his daily conversation