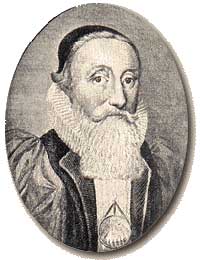 Joseph Hall received his early education at the local Ashby Grammar School, founded by his father's patron the Earl, and was later sent (1589) to Emmanuel College, Cambridge. The college was Puritan in tone, and Hall was undoubtedly under Calvinist influence in his youth. After some early setbacks (his father found it difficult to pay for a university education and nearly recalled him after the first two years) Hall's academic career was a great success. He was chosen for two years in succession to read the public lecture on rhetoric in the schools, and in 1595 became fellow of his college. During his residence at Cambridge he wrote his Virgidemiarum (1597), satires in English written after Latin models. The claim he put forward in the prologue to be the earliest English satirist: "I first adventure, follow me who list And be the second English satirist" gave bitter offence to John Marston, who attacks him in the satires published in 1598.

Thomas Fuller says: "He was commonly called our English Seneca, for the purenesse, plainnesse, and fulnesse of his style. Not unhappy at Controversies, more happy at Comments, very good in his Characters, better in his Sermons, best of all in his Meditations."

Bishop Hall's polemical writings, although vigorous and effective, were chiefly of ephemeral interest, but many of his devotional writings have been often reprinted. It is by his early work as the censor of morals and the unsparing critic of contemporary literary extravagance and affectations that he is best known. Virgidemiarum. Sixe Bookes. First three Bookes. Of Toothlesse Satyrs. (1) Poeticall, (2) Academicall, (3) Morall (1597) was followed by an amended edition in 1598, and in the same year by Virgidemiarum. The three last bookes. Of byting Satyres (reprinted 1599).