The Marrow of Modern Divinity
by Edward Fisher 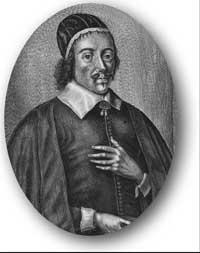 Christopher Love was born in Cardiff, Wales, in 1618. At the age of fourteen, he went to hear William Erbury, vicar of St. Mary’s in Cardiff, who would later stray into mysticism. His wife later wrote how Love reacted to that sermon: “God met with him and gave him such a sight of his sins and his undone condition that he returned home with a hell in his conscience.” His father noticed his son’s depression and locked him in a room on the second floor of the house to prevent him from attending church the next Sabbath. Love tied a cord to the window, slid down it, and went to church. His earlier convictions deepened and he was soon converted.

Against the wishes of his father but with the encouragement of Erbury, Love was admitted to New Inn Hall, Oxford, in 1635, and earned a bachelor’s degree in 1639. Love then moved to London and became chaplain to Sheriff Warner. He met the sheriff’s ward, Mary Stone, the daughter of a London merchant; he married her, and the Loves had five children: two girls who died early in life, and three boys. The last son was born thirteen days after Love’s death. read more....