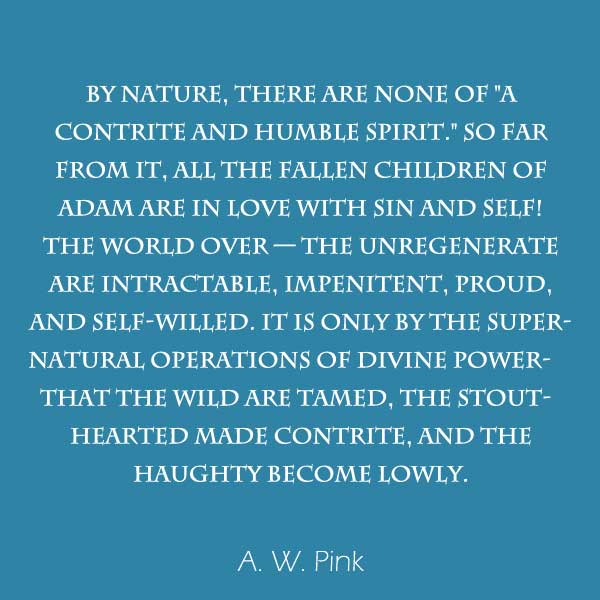 "For this is what the high and lofty One says—He who lives forever, whose name is holy: I live in a high and holy place—but also with him who is of a contrite and humble spirit." Isaiah 57:15

It will at once be obvious to a spiritual mind that no human pen, however gifted, could begin to do justice to such a verse as this; rather he is likely to detract from its sublimity and depreciate its grandeur in the estimation of the reader. It is one of those outstanding declarations of Holy Writ which is stamped so unmistakably with the autograph of its Divine Author. The mind of the creature could not have invented it, for the thoughts of a fallen being would never soar to such heights, conceive of such an ineffable Object as is here presented to our view, nor have imagined such an amazing act on His part as here predicated of Him. As a whole, it exhibits a threefold marvel and miracle.

FIRST, a marvel and miracle of Divine condescension, namely, that of the Highest and the lowest meeting together. Our estimation of the stupendous and amazing nature of this marvel, will be proportioned by our concept of the greatness and majesty of the Lord God. Alas, that in our day, the true nature of God is so little perceived, even by the majority of those who profess to be His people. So little does the modern pulpit set forth the perfections of Deity; yes, so wretchedly is He caricatured, that He has good reason to say of those in the churches, "You thought that I was altogether like you!" (Psalm 50:21). God is portrayed as feeble, fickle, compromising; unable to accomplish His purpose; swayed by the events of time; and indifferent to sin. It is not, too much to say, that the God of Scripture is "THE UNKNOWN GOD" (Acts 17:23) of modern Christendom! The "god" of the "churches" possesses scarcely any of the attributes of the living God—but is instead, a disgusting figment of their own perverted imagination and corrupt sentiments!

"Who has measured the waters in the hollow of his hand, or with the breadth of his hand marked off the heavens? Who has held the dust of the earth in a basket, or weighed the mountains on the scales and the hills in a balance? Who has understood the mind of the LORD, or instructed him as his counselor? Whom did the LORD consult to enlighten him, and who taught him the right way? Who was it that taught him knowledge or showed him the path of understanding? Surely the nations are like a drop in a bucket; they are regarded as dust on the scales; he weighs the islands as though they were fine dust. Lebanon is not sufficient for altar fires, nor its animals enough for burnt offerings. Before him all the nations are as nothing; they are regarded by him as worthless and less than nothing. To whom, then, will you compare God? What image will you compare him to?" Isaiah 40:12-18

Pause, my reader, carefully ponder those words; and then ask yourself, "Is there not a real and pressing need for me to revise, yes, radically alter my concept of this mighty and majestic Being?" "This is what the LORD says—Israel's King and Redeemer, the LORD Almighty: I am the first and I am the last; apart from me there is no God" (Isaiah 44:6).

The God of Scripture is "the blessed and only Ruler, the King of kings and Lord of lords, who alone is immortal and who lives in unapproachable light, whom no one has seen or can see. To him be honor and might forever! Amen." (1 Timothy 6:15-16). If that were more clearly grasped by our minds, and if it more powerfully influenced our hearts—we would stand in awe of such a One, and in astonishment, exclaim with one of old, "But will God indeed dwell on the earth?" (1 Kings 8:27). Such was the wondering exclamation of Solomon upon the completion of the temple—probably the most remarkable and imposing building ever erected by man on this earth—the placing of all its sacred vessels in their proper places, and the dedication of the whole. For Jehovah to take up His abode therein, seemed to him a thing incredible, impossible. Considering His immensity, he went on to say, "Behold, the heaven and heaven of heavens cannot contain you; how much less this house that I have built?" (1 Kings 8:27).

The One whom the heavens are incapable of containing cannot be circumscribed in place nor held by space, being infinite and omnipresent. The Heaven is His throne and the earth is His "footstool"—shall then the King of glory occupy that for His seat! Can such an One take up His abode in a human heart? Surely such a thing is far beyond the widest stretch of imagination. What! That He "who humbles himself—to so much as behold the things that are in heaven" (Psalm 113:6) should deign to tabernacle in a worm of the earth is utterly beyond comprehension! That He who is infinite should make His home in one that is finite—had never been thought of by mortal mind. That He who "inhabits eternity" (Isaiah 57:15) should indwell a creature of time, what is it but indeed a marvel and miracle of condescension—one which should bow us before Him in overwhelming wonderment and worship.

Yet Jehovah is not only the high and lofty One that inhabits eternity—but "whose name is Holy" (Isaiah 57:15). His very nature is ineffably pure. To His immaculate eyes, the heavens themselves are unclean (Job 15:15), "the stars are not pure in his sight" (Job 25:5). "You are of purer eyes than to behold evil, and cannot look on iniquity" (Hab. 1:13). If—then, it is an incredible thing for the great God to dwell on the earth, if it would be an incomprehensible thing for Him to tabernacle in a finite creature of time—even if that creature were himself sinless—what shall it be for One who is infinitely Holy to dwell within one that is fallen, corrupt, and vile? That is indeed a marvel and miracle of grace—appreciated only in proportion as we apprehend Who He is—and what we are!

We read that "the wolf will live with the lamb, and the leopard will lie down with the goat. The calf, the young lion, and the fatling will be together" (Isaiah 11:6), and that is a miracle of nature; but for the Holy One to indwell a sinner is a miracle of miracles, the transcendent marvel of grace!

Yes, it is not only a marvel of condescension that the infinite God should indwell a finite creature--but SECONDLY, it is also a miracle of Divine mercy that the ineffably Holy One should take up His abode in the heart of a fallen and sinful creature. Were it not that the Word of Truth clearly and repeatedly taught this—we had not dared to affirm it, nor even imagine such a wonder for ourselves. "Though the Lord is exalted, He takes note of the humble" (Psalm 138:6). O that our hearts were duly affected by His peerless graciousness. If they were, we would exclaim with the Psalmist, "Who is like the Lord our God— the One enthroned on high, who stoops down to look on the heavens and the earth? He raises the poor from the dust and lifts the needy from the garbage pile in order to seat them with nobles— with the nobles of His people!" (Psalm 113:5-8). The high and lofty One who inhabits eternity, whose name is Holy—yet "the God of all grace" (1 Peter 5:10).

"I live in a high and holy place—but also with him who is of a contrite and humble spirit" (Isaiah 57:15).

That exhibits to us, THIRD, a marvel and miracle of Divine power. By nature, there are none of "a contrite and humble spirit." So far from it, all the fallen children of Adam are in love with sin and self! The world over—the unregenerate are intractable, impenitent, proud, and self-willed. It is only by the supernatural operations of Divine power—that the wild are tamed, the stout-hearted made contrite, and the haughty become lowly.

Above, we have said that the great God takes up His abode in a worm of the earth—yet it is not one considered as a "worm of the earth" that He does so. No, rather is it as one upon whom the Lord had set His heart from before the foundation of the world, as one redeemed by Christ and cleansed by His precious blood, as one who has been renewed by the Holy Spirit, as one who has thrown down the weapons of his warfare and surrendered to the claims of God, as one who has been made a new creature by the might of Omnipotence. Wonder and adore at this threefold marvel and miracle!