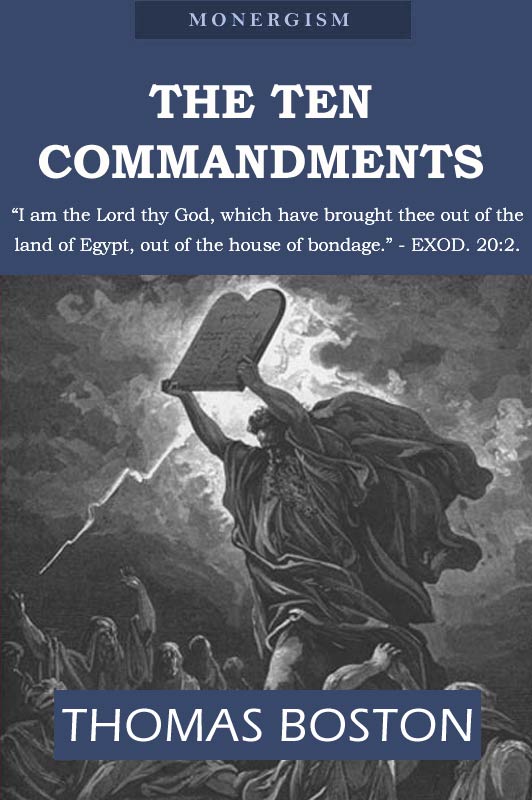 EXOD. 20:2.—I am the Lord thy God, which have brought thee out of the land of Egypt, out of the house of bondage.

SOME take these words, which are the first of that speech spoken immediately by God himself, to be a part of the first commandment, shewing who is the true God, that is to be our God. Our Catechism determines them to be a preface to all the commandments; and though they have a particular relation to the first command, 'Thou shalt have no other gods before me,' viz. The Lord thy God, which have brought thee out of the land of Egypt, out of the house of bondage; yet, seeing the first commandment has a common relation to all of them, and is interwoven with all the rest, and the words natively enforce obedience to the whole, they are set here as a preface to all the commands, like a magnificent entry into a palace, decorated with the arms of the owner. In the words consider,

1. The Speaker and Giver of these commandments. It is the Lord, particularly Jesus Christ, who gave this law in the name of the Trinity. This is plain from the scripture, Acts 7:38. Heb. 12:24–26. It was he that brought the people out of Egypt, and that appeared in the bush that burned with fire, and yet was not consumed, giving commission to Moses for their deliverance, Exod. 3:2–8.

2. The speech itself, wherein we have a description of the true God, bearing three reasons for the keeping his commands. (1.) From his sovereignty; he is the Lord. (2.) From his covenant-relation to his people, thy God. (3.) From the great benefit of redemption, and deliverance wrought for them.

DOCT. 'The preface to the ten commandments teacheth us, That because God is the Lord, and our God, and Redeemer, therefore we are bound to keep all his commandments.'

But it may be asked, Why does the Lord make use of arguments to induce us to obedience? Ans. Because he loves to work on man, as a rational creature, according to the principles of his nature. Hence he says, Hos. 11:4. 'I drew them with the cords of a man, with bands of love;' and because he delights in no obedience but what is unconstrained and cheerful. It is truly matter of wonder, that the infinitely glorious God should be at so great pains to incline man to pursue his own happiness.

Here I shall consider the several reasons of obedience mentioned in the text and doctrine, and then draw some inferences for application.

OF THE DUTY WHICH GOD REQUIRETH OF MAN

THE MORAL LAW, THE RULE OF MAN'S OBEDIENCE

THE MORAL LAW SUMMARILY COMPREHENDED IN THE TEN COMMANDMENTS

LOVE TO GOD AND OUR NEIGHBOUR, THE SUM OF THE TEN COMMANDMENTS

THE PREFACE TO THE TEN COMMANDMENTS

OF THE FIRST COMMANDMENT

OF THE SECOND COMMANDMENT

OF THE THIRD COMMANDMENT

OF THE FOURTH COMMANDMENT

OF THE FIFTH COMMANDMENT

THE DUTY OF RULING ELDERS AND PEOPLE

OF THE SIXTH COMMANDMENT

OF THE SEVENTH COMMANDMENT

OF THE EIGHTH COMMANDMENT

OF THE NINTH COMMANDMENT

OF THE TENTH COMMANDMENT

OF MAN'S INABILITY TO KEEP THE LAW PERFECTLY

OF SIN IN ITS AGGRAVATIONS

OF THE DESERT OF SIN