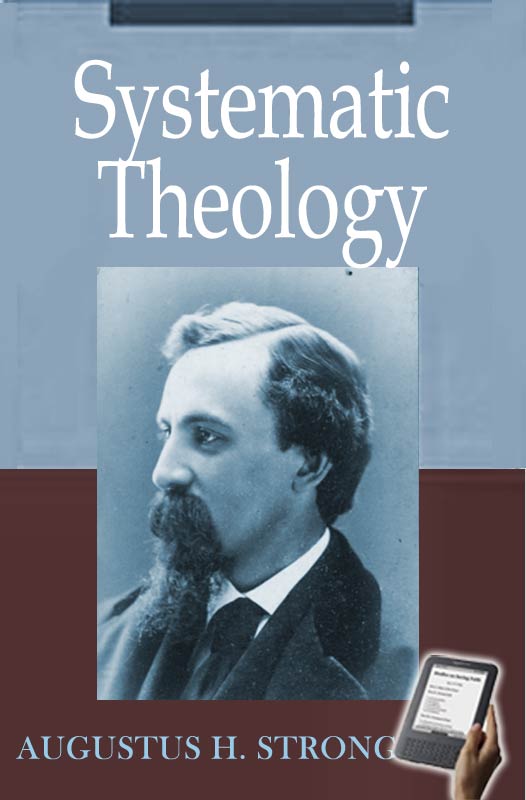 Note: While Augustus Strong has a great deal of good and sound theology, not all of it is, so the inclusion of this eBook does not entail an complete endorsement of everything he affirms. Some of his ideas about inclusionism, evolution and ambiguous assertions about monergism/synergism, in our view, are Scripturally problematic. Nonetheless students of theology may still find much to be gleaned here.

Three Volumes in One

The present work is a revision and enlargement of my “Systematic Theology,” first published in 1886. Of the original work there have been printed seven editions, each edition embodying successive corrections and supposed improvements.

I print this revised and enlarged edition of my “Systematic Theology,” in the hope that its publication may do something to stem this fast advancing tide, and to confirm the faith of God's elect. I make no doubt that the vast majority of Christians still hold the faith that was once for all delivered to the saints, and that they will sooner or later separate themselves from those who deny [pg x] the Lord who bought them. When the enemy comes in like a flood, the Spirit of the Lord will raise up a standard against him. I would do my part in raising up such a standard. I would lead others to avow anew, as I do now, in spite of the supercilious assumptions of modern infidelity, my firm belief, only confirmed by the experience and reflection of a half-century, in the old doctrines of holiness as the fundamental attribute of God, of an original transgression and sin of the whole human race, in a divine preparation in Hebrew history for man's redemption, in the deity, preëxistence, virgin birth, vicarious atonement and bodily resurrection of Jesus Christ our Lord, and in his future coming to judge the quick and the dead. I believe that these are truths of science as well as truths of revelation; that the supernatural will yet be seen to be most truly natural; and that not the open-minded theologian but the narrow-minded scientist will be obliged to hide his head at Christ's coming.

The present volume, in its treatment of Ethical Monism, Inspiration, the Attributes of God, and the Trinity, contains an antidote to most of the false doctrine which now threatens the safety of the church. I desire especially to call attention to the section on Perfection, and the Attributes therein involved, because I believe that the recent merging of Holiness in Love, and the practical denial that Righteousness is fundamental in God's nature, are responsible for the utilitarian views of law and the superficial views of sin which now prevail in some systems of theology. There can be no proper doctrine of the atonement and no proper doctrine of retribution, so long as Holiness is refused its preëminence. Love must have a norm or standard, and this norm or standard can be found only in Holiness. The old conviction of sin and the sense of guilt that drove the convicted sinner to the cross are inseparable from a firm belief in the self-affirming attribute of God as logically prior to and as conditioning the self-communicating attribute. The [pg xi] theology of our day needs a new view of the Righteous One. Such a view will make it plain that God must be reconciled before man can be saved, and that the human conscience can be pacified only upon condition that propitiation is made to the divine Righteousness. In this volume I propound what I regard as the true Doctrine of God, because upon it will be based all that follows in the volumes on the Doctrine of Man, and the Doctrine of Salvation.