Does Man Have a Free WIll?
Those in Bondage to Sin are Still Duty Bound to Obey God
The Grounds of Contentedness
Knowing God or Knowing about God
Monergism Publishes First Paperback Book
Christ in us in our Sanctification
Cross Bearing
The Eschewing of Idolatry
An 'Establishment Orthodoxy' that Opposes Rival Orders is Inescapable.
Predestination Destroys Legalism

The Substance of the Christian Religion (eBook) 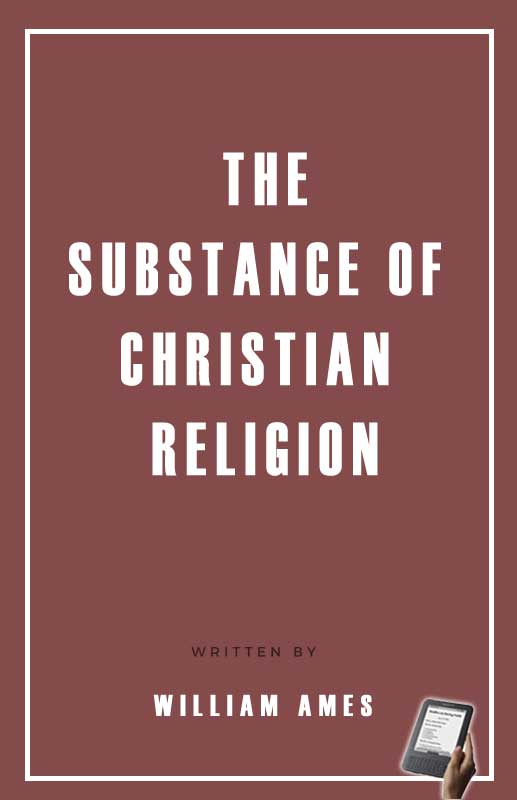 in ePub., .mobi and .pdf formats

Hand-typed, modernized, corrected, and annotated by William H. Gross. Slight formatting changes have been made for readability. The terms, “thee, thine, hast,” etc.have been modernized; archaic and cumbersome syntax has been simplified; obsolete words and phrases have either been revised, or annotated.

Some years have now passed since it pleased divine providence to put a period to the life of Dr. William Ames, in whose death very many interested themselves, as no indifferent mourners. Not only those who either, under the notion of scholars or friends, had become his familiars — but universally, all those who had been sensible of enjoying the fruits of his labours, and who were fervent lovers of sound literature, purity of heavenly doctrine, and godliness in sincerity of heart: knowing indeed that in Ames, the garden of learning had lost one of its choicest flowers, the fortress of truth one of its stoutest defenders, piety its most faithful favourite, the school a most able and reverent doctor, and studious youth their most diligent instructor. That we have in him lost such a man, those who derived their streams of learning from his clear fountain, are undeniable witnesses. In further testimony are his elabourate tracts in opposition to the idolatrous tyranny of popery, and the spreading gangrene of Arminianism, especially his Coronis, whereby he placed the Crown in conflict. As also those things which he dedicated to both religion and piety, his Marrow of Divinity, his Cases of Conscience, Explication of the Psalms, Peter, etc. And these, his Catechetical Commentaries, which indeed he intended for the private use of his scholars, upon whose entreaty he put them down. But things so eminently conducive to the public were not to be confined to the narrower limits of private profit. Among those diverse ways by which diverse [men] handle Catechetical Doctrine, this author thought fit above all to make use of this method: He takes out of the Word of God a text most apposite, resolves and explains it succinctly, then draws out examples containing doctrinal instructions, and lastly applies them to their several uses. If this disgusts some nicer palette, entreat him only little by little to remit that prejudiced opinion, which he can deduce from nothing but a slight perusal, and must upon a more settled introspection confess that in this piece Ames has most prudently chosen, and dexterously handled, the most plain and regular method for the preacher’s function, and Christian instruction. But if any should please themselves with any other method, they may with little pains, and exceeding profit, produce compliance between it and our Amesian System. The truth of this is sufficiently attested, not only by our own countrymen, but also by the Dutch, French, and others, among whose Catechistic Treatises this was and is [held] in no small esteem.

I need not have taken this much pains to premise a Prefatory Epistle, when indeed I am not ignorant how the least knowing among us will conclude me but weak to suppose, that I might induce them to prize this piece by a second motive, when the title has already presented them with the name of Ames. But lest a total silence should bring this work at first sight to be questioned as spurious, I thought it not altogether unnecessary to usher it into the world with this short preface.