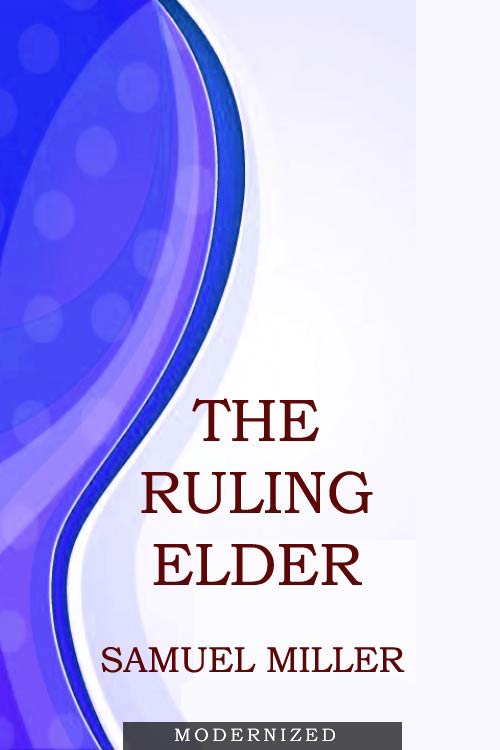 THE WARRANT, NATURE, AND DUTIES,OF THE OFFICE OF THE RULING ELDER IN THE PRESBYTERIAN CHURCH

For those interested I have provided a separate biographical essay (3 pages).

This is a truly extraordinary book, and deeply disturbing (provocative/evocative) for anyone serving as an elder (or deacon).

The substance of the following Essay was delivered from the pulpit, in the form of a sermon, more than twenty years ago, and subsequently published. In consequence of repeated solicitation from some individuals of your number, I have thought proper to alter its form, to enlarge its limits, and to adapt it, according to my best judgment, to more general utility. It has long appeared to me, that a more ample discussion of this subject than I have previously seen, is really needed. And if the present volume should be considered as, in any tolerable degree, answering the desired purpose, I will feel myself richly rewarded for the labour which has attended its preparation.

Such as it is, my venerated friends, I inscribe it most respectfully to you. My first prayer in regard to it is that it may be the means of doing some good; my next, that it may be received by those whom I have so much reason to respect and love, as a well-intended effort to benefit the church of God. I am aware that some of my brethren do not concur with me in maintaining the divine authority of the office of the ruling elder, and probably in several other opinions respecting this office advanced in the following pages. In reference to these points, I can only say that as the original publication, of which this is an enlargement, was made without the remotest thought of controversy, and even without adverting in my own mind to the fact that I differed materially from any of my brethren, so nothing is more foreign from my wishes in the republication, than to assail the opinions or feelings of any brother.I have carefully re-examined the whole subject, and although in doing this I have been led to modify some of my former opinions in relation to a few minor points, yet in reference to the divine warrant and the great importance of the office for which I plead, my convictions have become stronger than ever. The following sheets exhibit those views, and that testimony in support of them, which at present satisfy my own mind, and which I feel confident may be firmly sustained. How far, however, the considerations which have satisfied me may impress more impartial judges, I cannot venture to foretell. All that I dare to ask in their behalf is that they may be seriously and candidly weighed.

But there is one point in regard to which I anticipate no diversity of opinion. If the statement given in the following Essay concerning the duties incumbent on ruling elders is correct, it is certain that very inadequate views of those duties have too often been taken both by those who conferred and those who sustained the office, and that there is a manifest and loud call for an attempt to raise the standard of public sentiment in reference to the whole subject. That we make so little of this office, compared with what we might do, and ought to do, really appears to me one of the deepest deficiencies of our beloved church. That a reform in this respect is desirable, is to express but half the truth. It is necessary: it is vital. It has pleased the Sovereign Disposer to cast our lot in a period of mighty plans and of high moral effort for the benefit of the world. In the subject of this volume, I am inclined to think, is wrapped up one of those means which are destined, under his blessing, to be richly productive of moral energy in the enterprises of Christian benevolence, which appear to be every day gathering strength. When the rulers of the church will, in the genuine spirit of the humble, faithful, and laborious Paul, “magnify their office; when they will be found cordially and diligently cooperating with those who ‘labour in the word and doctrine,’” in inspecting, counselling, and watching over the “flocks” respectively committed to their “oversight in the Lord;” and when they will be suitably honoured and employed in their various appropriate functions, both by pastors and people — this change will, I believe, be at once one of the surest precursors, and one of the most efficient means of the introduction of brighter days in the church of God.

So far as we can anticipate events, this important change must begin with the teachers and rulers of the church themselves. On every one of you, therefore, if my estimate of the subject is correct, devolves a high and most interesting responsibility. That you may have grace given you to acquit yourselves of this responsibility in a manner acceptable to our common Master, and conducive to the signal advancement of his kingdom, and that future generations, both in the church and out of it, may have reason to “rise up and call you blessed,” is the fervent prayer of,

Reverend and Respected Brethren,
Your friend and Fellow-servant
In the House of God,
SAMUEL MILLER.
PRINCETON, April 20th, 1831.

Two: Testimony from the Order of the Old Testament Church.

Three: Evidence in Favor of the Office from the New Testament Scriptures.

Four: Testimony of the Church Fathers.

Five: Testimony of the Witnesses for the Truth during the Dark Ages.

Six: Testimony of the Reformers, and Other Learned and Disinterested Witnesses, Nearly Contemporary with Them.

Seven: Testimony of Eminent Divines since the Time of the Reformers.

Nine: The Nature and Duties of the Office.

Ten: Distinction between the Offices of the Ruling Elder and Deacon.

Eleven: The Qualifications Proper for this Office.

Twelve: On the Election of Ruling Elders.

Thirteen: Of the Ordination of Ruling Elders.

Fourteen: Of the Resignation of Ruling Elders;--Their Removal from One Church to Another;--And the Method of Conducting Discipline against Them.

Fifteen: Advantages of Conducting this Discipline on the Presbyterian Plan.