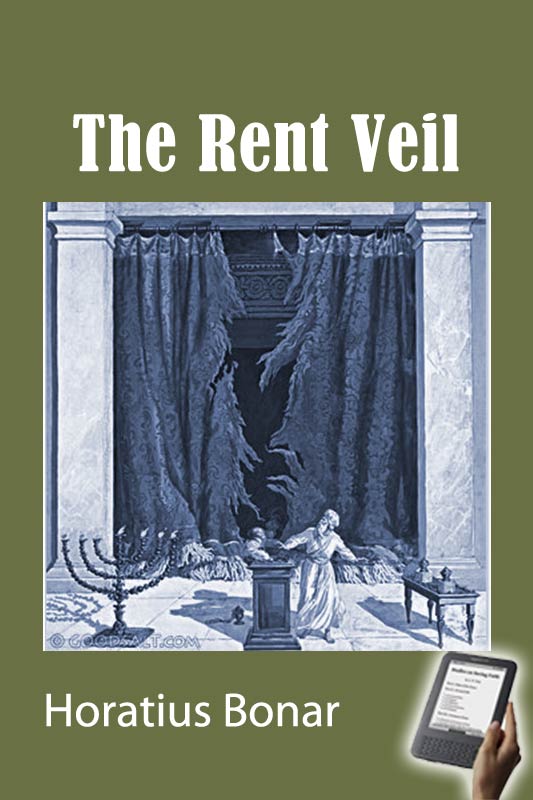 Horatius Bonar (1808-1889) was a Scottish theologian, poet, and writer of hymns.  In The Rent Veil, Dr. Bonar provides us with a wonderful treatment of the Atonement.

The Epistle to the Hebrews was written by the eternal Spirit for the whole Church of God in all ages. It shows us on what footing we are to stand before God as sinners; and in what way we are to draw near as worshippers.

It assumes throughout, that the present condition of the Church on earth is one continually requiring the application of the great sacrifice for cleansing. The theory of personal sinlessness has no place in it. Continual evil, failure, imperfection, are assumed as the condition of God's worshippers on earth, during this dispensation. Personal imperfection on the one hand, and vicarious perfection on the other, are the solemn truths which pervade the whole. There is no day nor hour in which evil is not coming forth from us, and in which the great bloodshedding is not needed to wash it away. This epistle is manifestly meant for the whole life of the saint, and for the whole history of the Church. God's purpose is that we should never, while here, get beyond the need of expiation and purging; and though vain man may think that he would better glorify God by sinlessness, yet the Holy Spirit in this epistle shows us that we are called to glorify God by our perpetual need of the precious bloodshedding upon the cross. No need of washing, may be the watchword of some; they are beyond all that! But they who, whether conscious or unconscious of sin, will take this epistle as the declaration of God's mind as to the imperfection of the believing man on earth, will be constrained to acknowledge that the bloodshedding must be in constant requisition, not (as some say) to keep the believer in a sinless state, but to cleanse him from his hourly sinfulness.

Boldness to enter into the holiest is a condition of the soul which can only be maintained by continual recourse to the blood of sprinkling, alike for conscious and for unconscious sin: the latter of these being by far the most subtle and the most terrible,--that for which the sin-offering required to be brought.

"If we say that we have no sin, we deceive ourselves, and the truth is not in us." The presence of sin in us is the only thing which makes such epistles as that to the Hebrews at all intelligible. When, by some instantaneous act of faith, we soar above sin, (as some think they do) we also bid farewell to the no longer needed blood, and to the no longer needed Epistle to the Hebrews.

"Through the veil, which is His flesh," is our one access to God; not merely at first when we believed, but day by day, to the last. The blood- dropped pavement is that one which we tread, and the blood-stained mercy-seat is that before which we bow. In letters of blood there is written on that veil, and that mercy-seat, "I am the way, the truth, and the life; no man cometh to the Father but by me": and, again, "Through Him we have access, by one Spirit, unto the Father."

Every thing connected with the sanctuary, outer and inner, is, in God's sight, excellent and precious. As of the altar, so of every other part of it, we may say, "Whatsoever toucheth it shall be holy" (Exo 29:37). Or, as the Apostle Peter puts it, "To you who believe this preciousness belongs" (1 Peter 2:7, i.e., all the preciousness of the "precious stone").

Men may ask, May we not be allowed to differ in opinion from God about this preciousness? Why should our estimate of the altar, or the blood, or the veil, if not according to God's, be so fatal to us as to shut us out of the kingdom? And why should our acceptance of God's estimate make us heirs of salvation? I answer, such is the mind of God, and such is the divine statute concerning admission and exclusion.

You may try the experiment of differing from Him as to other things, but beware of differing from Him as to this. Remember that He has said, "This is my beloved Son, in whom I am well pleased." Say what you like, He is a jealous God, and will avenge all disparagement of His sanctuary, or dishonour of His Son. Contend with Him, if you will try the strife, about other things. It may not cost you your soul. Dispute His estimate of the works of His hand in heaven and earth; say that they are not altogether "good," and that you could have improved them, had you been consulted. It may not forfeit your crown. Tell Him that His light is not so glorious as He thinks it is, nor His stars so brilliant as He declares they are. He may bear with this thy underrating of His material handiwork, and treat thee as a foolish child that speaks of what he knows not.

But touch His great work, His work of works,-- the person and propitiation of His only-begotten Son, and He will bear with thee no more. Differ from Him in His estimate of the great bloodshedding, and he will withstand thee to the face. Tell Him that the blood of Golgotha could no more expiate sin than the blood of bulls and of goats, and He will resent it to the uttermost. Depreciate anything, everything that He has made; He may smile at thy presumption. But depreciate not the cross. Underrate not the sacrifice of the great altar. It will cost thee thy soul. It will shut thee out of the kingdom. It will darken thy eternity.

Why We Should be More Familiar with OT Sacrifices
Peter Krol
God Makes Men Sensible of Their Misery Before He Reveals His Mercy and Love - Hosea 5:15
Jonathan Edwards
Safety, Fulness, and Sweet Refreshment, to be Found in Christ
Jonathan Edwards
Pruning for Fruitfulness
Stan Gale
Holding Grief and Joy in Tandem
Lara d’Entremont
Law and Gospel in God’s World
Jared Longshore
Law and Gospel in the Covenants
Jeff Johnson
God’s Law and God’s Children
Tom Ascol
Race and Racism in the Bible
Toby Jennings
Acknowledging God
Jared Longshore
About That Richard Baxter Quote: Part III
Timon Cline
About That Richard Baxter Quote: Part II
Timon Cline
About That Richard Baxter Quote: Part I
Timon Cline
Was Richard Baxter Orthodox on Justification?
Tom Hicks
How to Understand and Apply the Old Testament: Part 1
Jason DeRouchie
Why People in Your Church Don’t Evangelize — And One Really Important Thing to Do About It
Isaac Adams
A Treatise on Comforting Afflicted Consciences
Samuel Bolton
Heart-Surgery
Samuel Bolton
Sermons Upon 1 John 3 (eBook)
Thomas Manton
Jesus and Abraham
Richard Phillips
Peeking Past the Blindfold: The Sin of Partiality
Kyle Borg
Contentment
Neil C. Stewart
The Shoulders of Giants, the Counsel of the Wise
Nicholas T Batzig
The Four Last Things (eBook)
William Bates
I have declared my ways, and thou heardest me; teach me thy statutes
Thomas Manton
Is the Canon Closed?
Stephen Um
Theological Interpretation of Scripture
David Starling
Applying Scripture
Daniel M Doriani
Interpreting Scripture: A General Introduction
Jason DeRouchie
Scripture as a Divine and Human Book
Richard Phillips
The Biblical Covenants
Paul R Williamson
The Clarity of Scripture
Mark Thompson
The Biblical Canon
Michael J Kruger
The Self Attestation of Scripture and Internal Witness of the Holy Spirit
J V Fesko
The Reliability of the New Testament
Craig L Blomberg
The Relation of the Old and New Testaments
David Schrock
The Reliability of the Old Testament
Richard E Averbeck
Jesus’s View of the Old Testament
Craig L Blomberg
The Sufficiency of Scripture
Matthew Barrett
Contemporary Challenges to Inerrancy
D A Carson
The Authority and Inerrancy of Scripture
Matthew Barrett
The Deity of Christ
Robert Letham
The Two Ages
Dr. Ben Gladd
Scripture as Divine Revelation
Matthew Barrett
Nietzsche Was Right
Timothy J Keller
A Brief Critique of Critical Race Theory
Tom Ascol
The "Vision" Behind the Great Commission
James Street
Did the Incarnate Son Abandon His Divine Attributes?
Stephen J Wellum
The New Birth Is Not What You Think It Is
Matthew Barrett
The God Who Doesn’t Take Risks: The Comforting Doctrine of Providence
Melvin Tinker