The Recurrence of Synergism After the Reformation (eBook) 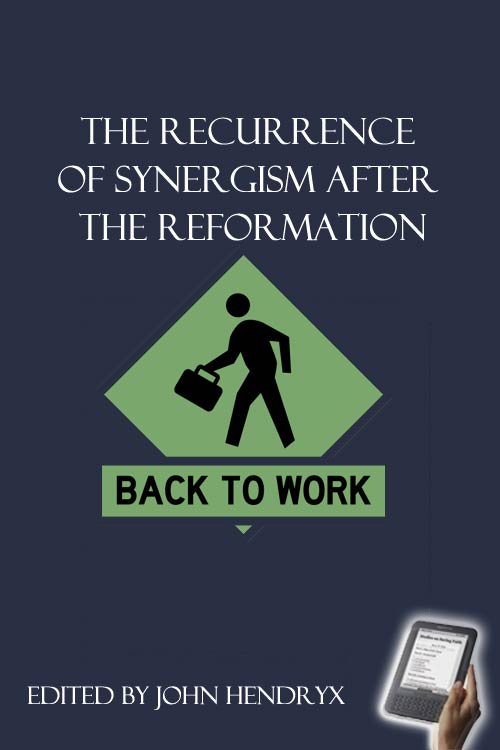 This eBook is a collection of essays which discuss the ongoing battle to preserve the integrity of the gospel after the Protestant Reformation. From that time until now there have been many movements in the visible church, and continue today, which have attempted to water down the grace of God in Jesus Christ - a diluted view of grace. Some of these teachings are subtle and some are not so subtle but from the beginning, and from the time of Jesus and Paul, fallen human beings have continued to be lured into bringing inconsistencies into the gospel of Christ alone. It is a battle we all need to be aware of and take precautions to avoid from the pulpit and from our pens. We do so by exposing what is false, but more importantly, by loudly and clearly proclaiming the genuine article that we would be more God-honoring by making Him known as He has made Himself known in the Scripture.

It seems that the whole progress of biblical revelation and church history through the ages has been forged out of the fire of controversy and the often angry struggles over truth. It is these great debates that have preserved the church from error and when the church grows lazy and fat, unwilling to be corrected, the world loses its only hope of salvation. It is never easy to correct, nor is it pleasant, but we are to "preach the truth in love." However, neither are we to pretend that our laziness, ignorance and apathy in defending the truth are really attempts to preserve the bond of unity. With Luther, we must say, "Unity wherever possible, but truth at all costs."Our attempt is to resurrect polemical debate as a means to the end of waking up a decadent and grossly unfaithful church and helping it make its way forward toward a second Reformation. And at a time when most Americans who claim to be Bible-believing Christians cannot, according to major studies, even articulate the basic message of the Gospel, what could be more relevant? Nevertheless, sometimes there are casualties of "friendly fire." - Michael Horton

"If grace depends on our cooperation then it is no longer grace." -Martin Luther

At the heart of the Reformation was one of the most fundamental questions of the Christian faith: How can I be saved from eternal damnation? The answer of all the leading Reformers was one and the same: only by God's free and sovereign grace. As J. I. Packer and O. Raymond Johnston have pointed out, it is wrong to suppose that the doctrine of Justification by faith alone, that storm center of the Reformation, was the crucial question in the minds of such theologians as Martin Luther, Ulrich Zwingli, Martin Bucer, and John Calvin. This doctrine was important to the Reformers because it helped to express and to safeguard their answer to another, more vital, question, namely, whether sinners are wholly helpless in their sin, and whether God is to be thought of as saving them by free, unconditional, invincible grace, not only justifying them for Christ's sake when they come to faith, but also raising them from the death of sin by His quickening Spirit in order to bring them to faith. - Michael A. G. Haykin

"What the Arminian wants to do is to arouse man's activity: what we want to do is to kill it once for all---to show him that he is lost and ruined, and that his activities are not now at all equal to the work of conversion; that he must look upward. They seek to make the man stand up: we seek to bring him down, and make him feel that there he lies in the hand of God, and that his business is to submit himself to God, and cry aloud, 'Lord, save, or we perish.' We hold that man is never so near grace as when he begins to feel he can do nothing at all. When he says, 'I can pray, I can believe, I can do this, and I can do the other,' marks of self-sufficiency and arrogance are on his brow." - C. H. Spurgeon

A Comparison of Systems: Pelagianism, Semipelagianism, and Augustinianism by A. A. Hodge

Pelagianism: The Religion of Natural Man by Michael Horton

How Did We Come to Faith in Christ? by R. Scott Clark

Determinism and Responsibility by Gordon Clark

The Controversy Between Whitefield and Wesley - 1740 by Iain Murray

Who Was Arminius? by Robert Godfrey

Arminianism and the Atonement by John Murray

Arminianism in the Pilgrimage of the Soul by John Murray

The Reformed Faith and Arminianism by John Murray

An Antidote Against Arminianism by Christipher Ness

Arminianism: The Road to Rome by Augustus Toplady

Does the Bible Teach "Prevenient Grace" in the Wesleyan/Arminian Sense? by Dr. Thomas R. Schreiner

Arminianisms by J. I. Packer

The Pelagian Captivity of the Church by R.C. Sproul

Man's Utter inability to Rescue Himself by Thomas Boston

God's Part and Man's Part in Salvation by John Reisinger