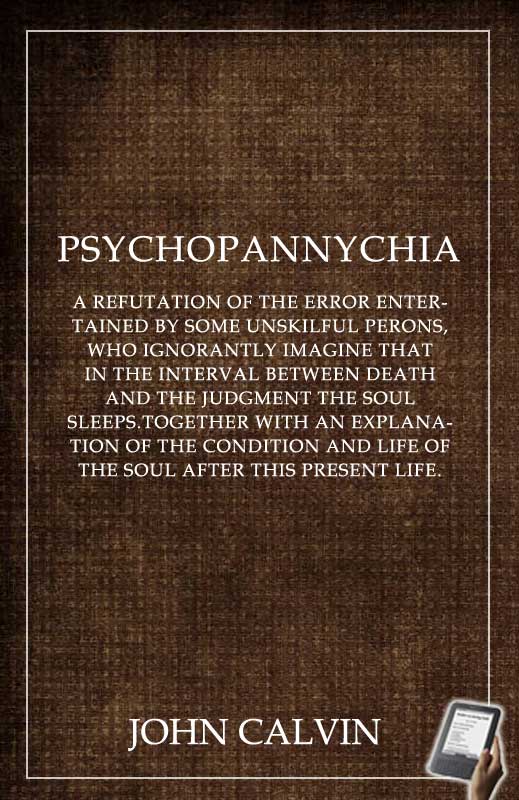 OR, A REFUTATION OF THE ERROR ENTERTAINED BY SOME UNSKILFUL PERONS, WHO IGNORANTLY IMAGINE THAT IN THE INTERVAL BETWEEN DEATH AND THE JUDGMENT THE SOUL SLEEPS.TOGETHER WITH AN EXPLANATION OF THE CONDITION AND LIFE OF THE SOUL AFTER THIS PRESENT LIFE.

JOHN CALVIN TO THE PIOUS READER.

It is said that Cato, when about to address the Roman People for the purpose of urging them to correct their extravagant expenditure, began by premising that he should have a difficult task to perform, as the belly had no ears. My task, were I to exhort the Romanists of the present day to restore the doctrine of godliness, and cleanse the Church of corruption, would be much more difficult: for I should have to contend not only with a deaf belly, but with blind ambition. We seer that however they may be vanquished in argument, they nevertheless continue obstinate because they think they have to fight for honor and life. I will not, therefore, be so foolish as to attempt in vain to recall them to a sound mind; those of them, I mean, whose contumacy is seen to be altogether desperate. I will rather turn in a different direction, and let all the godly see how abominable the impiety of those men is. Of this I here exhibit no obscure specimen in The Acts of the Council of Trent, in which they have so explained all their inward feelings, as to leave, nobody in doubt what the state of the Church would be if it depended on their decision.

But that this may the better appears I beg and exhort my readers first to peruse my treatise on the Necessity of Reforming the Church; and thereafter, on comparing, decide to which party they ought to incline.

ON again reading this DISCUSSION, I observe that, in the heat of argument, some rather severe and harsh expressions have escaped me, which may, perhaps, give offense to delicate ears; and as I know that there are some good men into whose minds some part of this dogma has been instilled, either from excessive credulity or ignorance of Scripture, with which at the time they were not armed so as to be able to resist, I am unwilling to give them offense so far as they will allow me, since they are neither perverse nor malicious in their error. I wish, therefore, to warn such beforehand not to take anything said as an affront to themselves, but to understand that, whenever I use some freedom of speech, I am referring to the nefarious herd of Anabaptists, from whose fountain this noxious stream did, as I observed, first flow, and against whom nothing I have said equals their deserts. If I am to have a future fight with them, I am determined they shall find me, if not a very skillful, yet certainly a firm, and as I dare promise, by God's grace, an invincible defender of the Truth. And yet against them I have not given immoderate vent to my bile, having constantly refrained from all pertness and petulance of speech; tempering my pen so as to be fitter for teaching than forcing, and yet able to draw such as are unwilling to be led. It was certainly much more my intention to bring all back into the right way, than to provoke them to anger.

All who are to read I exhort and beseech by the Name of God, and of our Lord Jesus Christ, that they bring an impartial judgment and a mind prepared as it were to be the seat of truth. I am aware of the power which novelty has to tickle the ears of certain persons: but we ought to reflect that "Truth has only one voice" - that which proceeds from the lips of our Lord. To Him alone ought we to open our ears when the doctrine of Salvation is in question, while to all others we should keep them shut. His word, I say, is not new, but that which was from the beginning, is, and always shall be. And as those err who, when the word of God, which had been laid aside through perverse custom or sloth, is brought to light, charge it with novelty; so they err, in the other direction, who are like reeds driven by the wind, nay, nod and bend at the slightest breeze! When we speak of learning Christ, do we mean that we are to lend an ear, without regard to the word of God, to any doctrine even though true? If you receive it as from man, will you not embrace falsehood with the same facility? For what has man of his own save vanity?

Such was not the conduct of those who, when they had received the word, searched the Scriptures to see whether these things were so (Acts 17:11) - a noble example, if we would imitate it; but we, I know not from what sloth, or rather contempt, receive the word of God in such a way that when we have learned three syllables, we immediately swell up with an opinion of wisdom, and think ourselves rich men and kings! Hence, you see so many who, unlearned themselves, keep tragically bawling out about the ignorance of the age! But what can you do? They are called, and would wish to be thought Christians, because they have got a slight knowledge of some commonplaces; and as they would be ashamed to be ignorant of anything, they with the greatest confidence, as if from a tripod, give forth decisions upon all things. Hence so many schisms, so many errors, so many stumbling blocks to our faith, through which the name and word of God are blasphemed among the ungodly. At length, (this is the head of the evil!) while they proceed obstinately to defend whatever they have once rashly babbled, they begin to consult the oracles of God, in order that they may there find support to their errors. Then, good God! what do they not pervert, what do they not adulterate and corrupt, that they may, I do not say bend, but distort it to their own view? As was truly said by the poet, "Fury supplies armor."

Is this the way of learning - to roll the Scriptures over and over, and twist them about in search of something that may minister to our lust, or to force them into subjection to our sense? Nothing can be more absurd than this, O pernicious pest! O tares certainly sown by an enemy's hand, for the purpose of rendering the true seed useless! And do we still wonder at the many sects among those who had at first given in their adherence to the gospel and the reviving word? I, for my part, am terrified by the dreadful denunciation,

"The kingdom of God shall be taken from you, and given to a nation bringing forth the fruits thereof." (Matthew 21:43.)

Here, however, I desist from my complaints: for I should write a large volume were I to declaim in just terms on the perversity of this age. Let us, brethren, warned by so many examples, at length, though late, become wise. Let us always hang on our Lord's lips, and neither add to His wisdom nor mix up with it anything of our own, lest like leaven it corrupt the whole mass, and make even the very salt which is within us to be without savor. Let us show ourselves to be such disciples as our Lord wishes to have - poor, empty, and void of self-wisdom: eager to learn but knowing nothing, and even wishing to know nothing but what He has taught; shunning everything of foreign growth as the deadliest poison.

I would here obviate the objections of those who will blame my present undertaking, charging me with stirring up fierce contests about nothing, and making trifling differences the source of violent dissensions: for there are not wanting some who so reproach me. My answer is, that when Divine Truth is avowedly attacked, we must not tolerate the adulteration of one single iota of it. It is certainly no trivial matter to see God's light extinguished by the devil's darkness; and besides, this matter is of greater moment than many suppose. Nor is it true as they allege that he who does not acquiesce in the errors of others, shows deadly hate by dissenting from them. I have censured the curiosity of those who would agitate questions which are truly nothing else than mere tortures to the intellect. But after they have stirred this camarina, their temerity must be repressed, lest it should prevail over the truth. Whether I have succeeded in this I know not: it was certainly my wish, and I have done the best I could. If others can do better, let them come forward for the public good!

The Covenant of Works
Charles Hodge
The Bread of Life - John 6:35–51
R C Sproul
Salvation in Christ Alone: What Is "The Great Exchange"?
Don Strand
The Angry Mob And Their Counterfeit Religion
C. R. Carmichael
A Catechism On Pastoral Theology
Daniel Hyde
How Can I Obtain Assurance of Salvation?
Dr. John MacArthur
Why You Should Reject the Message of Dana Coverstone
Josh Buice
Unsound Teaching Produces Unsound Churches
Josh Buice
How to View Claims About Dreams and Visions
Costi Hinn
How Early Christianity was Mocked for Welcoming Women
Michael J Kruger
Does God elect His people to salvation based on any condition they have met?
Greg Nichols
Oh that my ways were directed to keep thy statutes!
Thomas Manton
Commentary on Psalm 37 (eBook)
C H Spurgeon
Prayer Will Win the Nations: Three Ways to Pray for Missionaries
Desiring God
What Does ‘Unequally Yoked’ Mean in 2 Corinthians 6?
Ronni Kurtz
Geerhardus Vos: Pauline Eschatology
Danny Olinger
The Pauline Eschatology (eBook)
Geerhardus Vos
Salvation
Geerhardus Vos
Omnipotence
Geerhardus Vos
The Resurrection
Geerhardus Vos
An Open Letter to the Pastor Desiring Racial Reconciliation in the Church
Mark Vroegop
Why Moralistic Therapeutic Deism Is a Dead End
Jen Oshman
White Fragility Is Pro-Racism
Samuel Sey
Eschatology of the New Testament
Geerhardus Vos
The Name "LORD" as Used of Jesus in the Gospels
Geerhardus Vos
The Second Coming of Our Lord and the Millennium
Geerhardus Vos
The Eschatological Aspect of the Pauline Conception of the Spirit
Geerhardus Vos
The Priesthood of Christ in the Epistle to the Hebrews
Geerhardus Vos
The Sacrificial Idea in Paul’s Doctrine of the Atonement
Geerhardus Vos
The Pauline Conception of Redemption
Geerhardus Vos
The Kingdom of God
Geerhardus Vos
The Man of Sin
Geerhardus Vos
Opportunistic Digital Hirelings
Nicholas T Batzig
Why Should Pastors Care About Their Holiness?
Aaron Menikoff
Cultivate Humility
Erik Raymond
Five Reflections on Pastoral Disagreements
Andy Naselli
Black Lives Matter: Affirm the Sentence, Not the Movement
Albert Mohler
The Evangelical Church’s Confused Witness on Race (3-Part Series)
Bill Peacock
Scripture, Culture, and Convictions
Nicholas T Batzig
Are Churches “A Major Source of Coronavirus Cases?”
Tim Challies
Exposition of the Apostles' Creed (eBook)
William Perkins
The Armor Of God: Your Offense Against Satan
Daniel Hyde
The Devil: The Most Important Thing You Need To Know
Daniel Hyde
When Evolutionists Help Creationists Make Their Case
Dr. Nathaniel T. Jeanson
Spiritual Counsels (eBook)
Thomas Charles
Leaders., are You Stewarding Your Words Well
Daniel Darling
Truth Exists Whether We Know It or Not
Jonathan Noyes
What Does a Christian Need to Grow?
Stephen Kneale
Why we need a solid foundation for navigating the ethics of big tech
Jason Thacker
The Office and Work of the Holy Spirit - Modernized (eBook)
James Buchanan