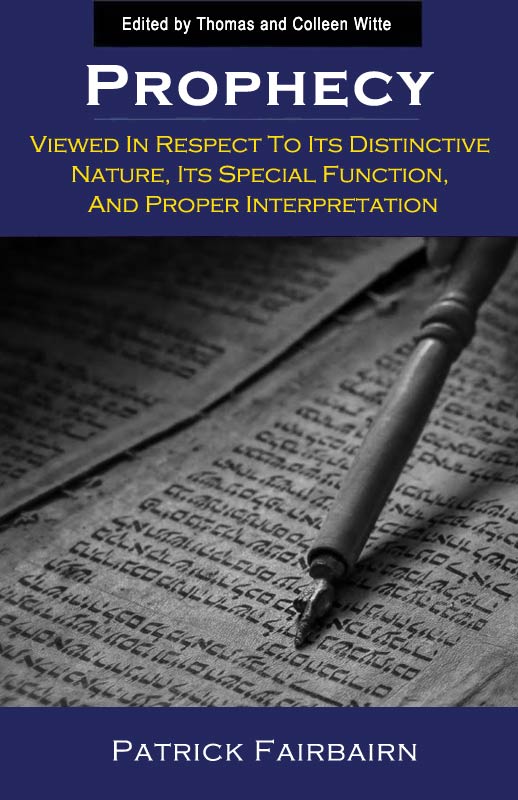 Prophecy: Viewed In Respect To Its Distinctive Nature, Its Special Function, And Proper Interpretation

Edited by Thomas and Colleen Witte

The subject of the present volume is so closely connected with those of some former publications, that it has for long engaged a considerable share of my attention. More recently, however, my thoughts have been, in an especial manner, turned in this particular direction. It has fallen to me, in the discharge of my official duties, to treat of the evidences of revealed religion, and, among others, of the evidence of prophecy. But the whole of this department of theology has been peculiarly affected by the spirit of the age; and a mode of treatment is now required for the several topics it embraces, materially different from what was wont to be pursued even so lately as the earlier part of the present century. Such especially is the case in respect to the subject of prophecy. The claim of the Bible to divine authority, on the ground of its predictions, has now to be maintained from a more internal position than formerly; since objections are laid by the opponents or corrupters of the truth against the argument from prophecy, less on the ground of an alleged weakness in the argument itself, abstractedly considered, than by attempting to extract the element of prophecy from Scripture, in so far as it can be said to carry with it any argumentative value. Adopt their mode of contemplating the prophetical Scriptures, and you no longer possess the materials necessary for constructing an argument that will serve the cause of Christianity. Contemporaneously, too, with this relative change on the part of the impugners of revelation, modes of interpretation, and views founded on them, have been gaining currency among many students of Scripture, which, if valid, would deprive the argument from prophecy of some of its most important defences. The immediate result of the two tendencies combined has been to involve the subject of prophecy in a medley of confusion, and in great measure to antiquate, even for argumentative purposes, the works which have been framed with an express view to the exhibition of the prophetical argument. In a higher respect, however, this state of things is not to be regretted; since it necessarily forces on the friends of revelation a more fundamental investigation of the whole subject, and cannot fail to lead to the establishment of more correct views respecting the proper function and essential characteristics of prophecy. It is here peculiarly, that this portion of our theological literature has been defective and unsatisfactory. 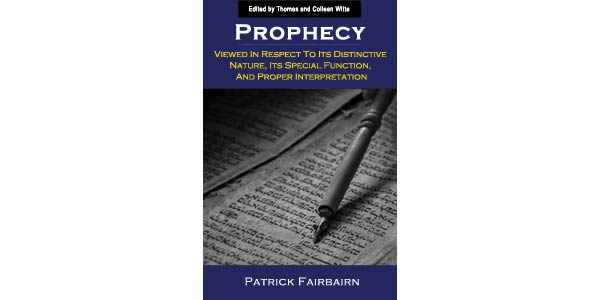 With the view of contributing to supply this defect, and meeting the new phase of things which has rendered it more clearly manifest, the present volume has been composed. Hence, nearly one half of the volume is devoted to the investigation of the principles of the subject, without which no satisfactory foundation can be laid, nor can any reasonable prospect be entertained, of a general agreement as to the right use and interpretation of prophecy. The latter half, which treats of definite portions of the prophetical Scriptures, as well in regard to past as to prospective fulfilments, is conducted strictly as an application of the principles set forth and maintained in the earlier. In all fairness and propriety, therefore, the one should be examined and weighed before judgment is pronounced upon the other; the course of inquiry should be followed, by which it has been sought to establish the fundamental principles, before the results are looked at, to which, by the application of them, we have been conducted. It has been our object, however, in that part of the volume, which treats of what is fundamental, to interweave with the discussion as many illustrations as possible of particular prophecies, so as, while chiefly occupied with laying the foundation, to make some progress also in raising the superstructure.

The more immediate occasion and design of the work will serve also to account for another characteristic in the form. Writing more especially for those, who wish to study the subject in its essential features, and as connected chiefly with the proper interpretation of Scripture, it has formed no part of my plan to give a complete history of opinion on the topics handled, or to recount at length the views of particular writers. I have aimed at giving the treatise rather an exegetical and positive, than a negative and controversial aspect; and have been at more pains in establishing what I conceive to be the truth, than in noticing every shade and variety of error, that may have appeared in opposition to it. All the leading forms of opinion, of course, are indicated, and wherever necessary for purposes of argument or illustration, references to particular authors are also made; but not unfrequently where views at variance with my own are mentioned, I have purposely refrained from connecting them with the names of individual authors, that the discussion might not be entangled, beyond what was necessary, with personal associations. I need scarcely add, that I have never ascribed to an individual or a party opinions, for which I have not at command the clearest evidence. And in those cases, in which I have adopted from another any view of a passage or a symbol, that may be designated new or peculiar, I have not failed to ascribe it to the proper quarter.

Occasional portions of the volume have appeared already in print, chiefly in periodical publications. But as these form a comparatively small part of the whole, and have also undergone considerable changes and modifications, I have not thought it necessary to distinguish them in any way from the rest. The chapter, however, on the Prophetical Future of Israel, is in no respect a reprint of what appeared as an Appendix on the same subject in the First Edition of the Typology; but is an entirely new investigation. The subject of what is called the Double Sense of Prophecy has been here omitted, because it is formally treated in the First Volume of the Typology (Second Edition), where it is explained as a combination of type with prophecy.

In almost every case, where I have departed from the received text, or from the authorized translation of the Scriptures, I have noticed the difference, and indicated my reasons for so doing. In a few instances, however, such as “a Son of Man” for “the Son of Man,” in Dan. vii. 13; Rev. i. 13, and “the kingdom, or sovereignty of the world” for “the kingdoms of the world,” becoming Christ's, Rev. xi. 15—where the correct text or rendering is generally known, I have thought it unnecessary to take any particular notice of the diversity.

The four sections of the last chapter are longer than I could have wished; but it was impossible to compress into a shorter compass the discussion of the topics handled in them. Each section, however, contains several breaks, at which the reader may pause in the perusal; and to facilitate his reference to the different topics embraced in them, the Contents of these sections have been exhibited in detail.