A Practical Commentary Upon the First Epistle of Peter (eBook) 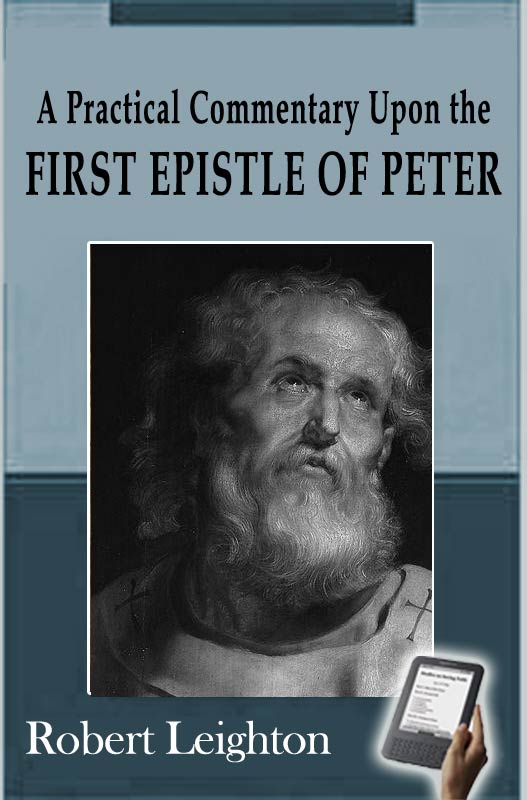 Robert Leighton (1611 – 25 June 1684) was a Scottish prelate and scholar, best known as a church minister, Bishop of Dunblane, Archbishop of Glasgow, and Principal of the University of Edinburgh from 1653 to 1662. He was "noted for his Christian piety, his humility and gentleness, and his devotion to his calling"

Leighton saw good and bad in both the Episcopal and the English Puritan forms of worship. The Puritan Party gained such popularity that Leighton retired from the Ministry at Newbattle, citing the introduction of the Cromwellian ideas as to doctrine and ritual, as his main reason. Scotland's "Apostle of Peace", as he became known, took up the post at Edinburgh University as Principal for a period of 8 years, before being summoned to London, by Charles II, to be one of four Bishops appointed to look after the King's Northern realm in the Westminster Way. Hence his term at Dunblane as Bishop and subsequently at Glasgow as Archbishop.

The grace of God in the heart of man is a tender plant in a strange unkindly soil; and therefore cannot well prosper and grow, without much care and pains, and that of a skilful hand, and one who has the art of cherishing it: for this reason God has given the constant ministry of the word to His Church, not only for the first work of conversion, but also for confirming and increasing His grace in the hearts of His children.

And though the extraordinary ministers of the Gospel, the Apostles, had principally the former for their charge—the converting of unbelievers, Jews and Gentiles, and so the planting of Churches, to be after kept, and watered by others (as the Apostle intimates, 1 Cor. 3:6); yet did they not neglect the other work of strengthening the grace of God begun in the new converts of those times, both by revisiting them, and exhorting them in person, as they could, and by the supply of their writing to them when absent.

And the benefit of this extends, (not by accident, but by the purpose and good providence of God,) to the Church of God in all succeeding ages.

This excellent Epistle (full of Evangelical doctrine and Apostolic authority) is a brief, and yet very clear summary both of the consolations and instructions necessary for the encouragement and direction of a Christian on his journey to Heaven; elevating his thoughts and desires to that happiness, and strengthening him against all opposition along the way, both that of corruption within, and temptations and afflictions from without.

The heads of doctrine contained in it are many, but the main that are most insisted on, are these three, faith, obedience, and patience; to establish them in believing, to direct them in doing, and to comfort them in suffering. And because the first is the groundwork and support of the other two, this first chapter is much occupied with persuading them of the truth of that mystery which they had received and did believe, viz. their redemption and salvation by Christ Jesus; that inheritance of immortality bought by His blood for them, and the evidence and stability of their right and title to it.

And then he uses this belief, this assurance of the glory to come, as the great persuasive to the other two, both to holy obedience, and constant patience, since nothing can be too much either to forego or undergo, either to do or to suffer, for the attainment of that blessed state.

And as from the consideration of that object and matter of the hope of believers, he encourages to patience, and exhorts to holiness in this chapter in general; so in the following chapters, he expresses more particularly both the universal and special duties of Christians, both in doing and suffering; often setting before those to whom he wrote the matchless example of the Lord Jesus and the greatness of their engagement to follow Him.

Ver. 1. Peter, an apostle of Jesus Christ, to the strangers scattered

Ver. 2. Elect according to the foreknowledge of God the Father

Ver. 3-4 Begotten us again unto a lively hope by the resurrection of Jesus Christ

Ver. 5. Who are kept by the power of God

Ver. 7. That the trial of your faith

Ver. 10-12. Of which salvation the prophets have enquired and searched diligently

Ver. 13. Wherefore gird up the loins of your mind

Ver. 17. Pass the time of your sojourning here in fear

Ver. 18-19. Redeemed with the Precious Blood of Christ

Ver. 20. Who verily was foreordained before the foundation of the world

Ver. 22. Love one another with a pure heart fervently.

Ver. 23. Being born again, not of corruptible seed, but of incorruptible

Ver. 1-2. As new-born babes, desire the sincere milk of the word

Ver. 3. If so be you have tasted that the Lord is gracious

Ver. 4-5. A living stone, disallowed indeed of men, but chosen of God

Ver. 6. I lay in Sion a chief corner-stone, elect, precious

Ver. 7-8. And a stone of stumbling, and a rock of offence

Ver. 9. But you are a chosen generation, a royal priesthood

Ver. 10. But now have obtained mercy.

Ver. 11. Dearly beloved, I beseech you as strangers and pilgrims

Ver. 12. Having your conversation honest among the Gentiles

Ver. 13-14. Submit yourselves to every ordinance of man

Ver. 15-16.    with well doing you may put to silence the ignorance of foolish men

Ver. 18-20. when you do well, and suffer for it, you take it patiently, this is acceptable with God.

Ver. 21-23. Christ also suffered for us, leaving us an example

Ver. 24. By whose stripes you were healed.

Ver. 25. For you were as sheep going astray

Four Ways to Teach Children How to Work
Curated Resources
What Is Spiritual Watchfulness and Why Does It Matter?
Wilhelmus a Brakel
The Reality of Human Trafficking
Rev David P Murray
The Fear of Death and God’s Grip
Jim Elliff
The Logic of Westminster's Confession
Jeffrey Stivason
What Does the Death of Cultural Christianity Cost?
Andrew Walker
Is the Old Testament Unintelligible without the New? Important Considerations on the Relationship between the Testaments
Brad Klassen
Five Suggested Guidelines for Pastors and Church Staff on Social Media
Thom S Rainer
The Most Notable Effects of the First and Second Great Awakenings
Thomas Kidd
We Seek a Better City: The Liberating Power of Christian Hope
David Mathis
Assume the Best of Others: Resilient Love in an Age of Suspicion
Greg Morse
Watson’s Wisdom on Prayer
Donald K McKim
On Masks, Vaccines, and Church Unity
Adam Parker
Martin Luther on Christian Friendship
Austin Hobbs
Michael Youssef’s Views on Woke Pastors; Biblical Liberalism All Over Again
Dr Harry L Reeder III
Explaining Biblical Inerrancy
R C Sproul
Is Critical Race Theory Leading to Catastrophe in the Church?
Voddie Baucham
Trouble of Mind and the Disease of Melancholy (YouTube Audio Book)
Timothy Rogers
A Discourse Concerning Trouble of Mind, and the Disease of Melancholy (eBook)
Timothy Rogers
How to Learn Contentment
J R Miller
Adoption: Meeting a Desperate Need
Dan Cruver
The Deity of Christ
Kim Riddlebarger
Hear Anything Lately About the Wrath of God? The Silence Is Deafening
Kim Riddlebarger
Joseph's Faith in the Face of Death
Kim Riddlebarger
God will not Forsake His Saints
Mike Ratliff
Why I Left The Mormon Church
Curated Resources
Think Small for Big Improvements in Preaching
Jonathan T Pennington
It is finished - John 19:30
Thomas Manton
That Dreadful Cup and Our Faithful Savior
Erik Raymond
Why Have You Forsaken Me?
Charles Wingard
Why Did Jesus Pray 'Let This Cup Pass from Me'?
Dave Jenkins
The Cup of Salvation
James Grant
Jesus in Gethsemane
Dr Knox Chamblin
The Other Cup
Ray Dillard
A Cup of Wrath Poured Out
Kevin DeYoung
The cup which my Father hath given me, shall I not drink it?
Thomas Manton
On the Affections of God
Curated Resources
Truth We Confess: Confessional Integrity and the PCA
David Strain
Christ’s Church
Dr Harry L Reeder III
Amillennial.org
Curated Resources
The Error of Dispensationalism (YouTube)
119 Ministries
Four Ways to Read the Book of Revelation (YouTube)
R C Sproul
A Robbery Committed, And Restitution Made, Both To God And Man
Ebenezer Erskine
The Noetic Effects of Sin
Barry Cooper
Perseverance
Barry Cooper
The Absolute Sovereignty of God Over All
Ray Heiple
The Westminster Confession and Good and Necessary Consequence
Stephen Unthank
Platforms, Polemics, and Pastoral Ministry
Nicholas T Batzig
Fellowship With God (eBook)
Hugh Binning
Pitiful Pride
Carl Trueman