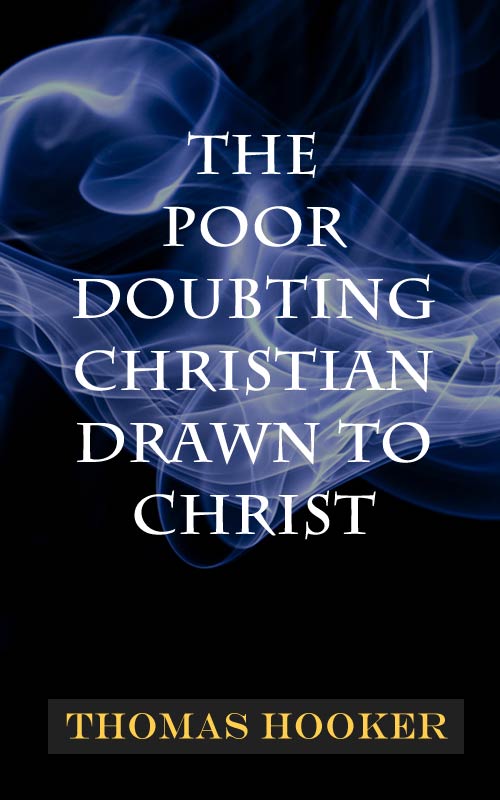 The Poor Doubting Christian Drawn to Christ In which the main hindrances which keep men from coming to Christ are revealed; with special helps to recover God’s favor.

Isa 55.1. Ho, everyone who thirsts, come to the waters,and he that has no money, come, buy and eat; yes, come, buy wine and milk without money, and without price.

EVERY minister, especially if a pastor, meets with Christians who suffer spiritual trials of various forms and degrees of intensity. His solicitude as a conscientious and affectionate watchman for souls, is awakened for them, while he yet feels uncertain on the precise counsels to be given for their instruction and relief. Therefore, a book which can be put into their hands, adapted to their needs — one they can read repeatedly; examine their own hearts by; pray over; aid in their understanding of the causes of their sorrows, and finding their way out of perplexity and darkness into light and comfort — such a book cannot fail to be esteemed of great worth. A book of such a character, it is believed, will be found in the present little volume. It will subserve the twofold purpose of guarding Christians against the devices of their adversary, and preventing discomfort and mistakes relative to their spiritual state. The biographical sketch of the venerable author will apprize the reader of how well qualified he was to deal with cases of spiritual perplexity.

Not only the private Christian, but the minister, will find this little work worthy of frequent perusal. As the physician avails himself of the books of experienced and skillful practitioners, so the Christian minister feels it a privilege to avail himself of the results of the studies, experience, and observation of his fathers and brethren — those who have been wise and successful in their treatment of the cases of afflicted and tender-spirited Christians.

It cannot be doubted that there is a danger of “healing the hurt” of the professor of religion too readily. Peace and comfort may be administered where they do not belong; or before the way is prepared. There are probably professors of religion who have occasion to doubt themselves. The one in whom a worldly spirit predominates — whose example is inconsistent with his Christian covenant; who lives in an unsettled, uneasy, and skeptical frame of mind relative to great and fundamental doctrines of the gospel; or who has adopted unscriptural views of divine truth; or contends with those doctrines of the Scriptures which humble human pride, and show man entirely dependent on the sovereign grace of God; or who is endeavoring to make hope and profession the means of his quiet, notwithstanding the disturbances and rebukes of a dissatisfied conscience; — the professor of religion in whom any of these things appear, has serious reason to be afraid for himself. The following pages do not appear to have been written for such a person. Instead, Fuller’s Backslider; Mead’s Almost Christian; Alleine’s Alarm, and Baxter’s Call to the Unconverted, are recommended for their serious perusal. The faithful minister will make it one object of his instructions, to disturb the peace of such professors. For they may be ruined by self-deception, unless their peace is broken up and replaced by “a better hope.”

This book, therefore, should be read with a right understanding of its design, and of the precise class of cases to which its counsels are adapted. It is designed for “mourners in Zion:” for those children of God whose “souls are cast down and disquieted within them:” for those who “walk softly before the Lord;” who live in conflict with sin in themselves; who have been wounded with “the fiery darts of the wicked one;” and who would prize, inestimably, the peace and comfort to be obtained by going to Calvary, and in “sitting at the feet of Jesus.” 2

It is probable that the present volume will fall into the hands of some who have prematurely entered the visible church. Views of religion have been taught in recent years, which have multiplied such cases to an alarming extent. Under the influence of erroneous instruction, many (it is feared) have made a profession of religion because they have resolved in a general way to live “religiously.” They have begun to do some of the outward things of religion; while (to use the language of David Brainard) they “do not see any manner of difference between those exercises which are spiritual and holy, and those which have self-love for their beginning, center, and end!” The statement of such subjects of Christian experience, which are contained in this book, may be met by this class of persons, with the language of the skeptical Athenians to Paul: “You bring certain strange things to our ears.” It is affectionately suggested for their consideration, that to have come into the visible church in ignorance of those spiritual affections which are produced in the renewed heart by the Holy Spirit, is to have taken a step that is attended with serious hazard. The one who professes religion in ignorance or skepticism of the offices and work of Christ in our redemption, does it to the endangering of his soul. The one who comes to the altar of God to declare himself a Christian, and to take a Christian’s vows — who misunderstands, disesteems, or calls into question the offices and work of the Holy Spirit in regeneration — equally imperils his eternal interests.

If the perusal of the following pages by those who profess religion, induces in them a spirit of inquiry, a review of their religious course, self-examination, and the correction of mistaken views as to the work of grace and its Author — and if any perplexed and trembling Christian would be relieved, established, and comforted in being “drawn to Christ” — then it will not be in vain that the venerable author of this book, in its republication, has broken the silence of more than a hundred years, to speak again to the children of God, “the heirs of salvation.”

It is respectfully suggested for the consideration of ministers of the gospel, to inquire whether the methods of instruction and counsel exemplified in this book, may not be too rare at the present day. Shouldn’t those to whom Christ has said, “feed my sheep, feed my lambs,” cultivate that acquaintance with the members of their churches? Shouldn’t pastors take that interest in their members’ spiritual condition, which will better prepare them to understand their religious trials, perplexities, and conflicts — and help themselves to more wisely and successfully administer for their comfort and establishment in the hope which is in Christ Jesus? In such duties will be found some of the most interesting and profitable labors of the pastor. It is good to thus be laborers together with Christ, in “comforting those who mourn in Zion.”

In the revision of this volume for the press, the editor has confined himself principally to changes in the orthography (spelling), and the omission of numeral repetitions. The author appears to have translated his Scripture proofs for himself; this accounts for discrepancies from the received English text.

No apology is offered for leaving the author to speak in the style of his time. Antiquated though it may be, in some instances, it has a simplicity and force of expression which should not be sacrificed to so unimportant an object as giving ancient thoughts a modern dress. Puritan thoughts are best expressed in the style of their Puritan authors. That is not good taste which would bring up from his grave, a writer of another century, to express himself in the style of the present day. Moreover, changes made in an author’s style, place at risk the precise import of his writings. And thus shades of difference (or even something more important than shades) may be introduced. This does injustice to his true sentiments, and frustrates the original design of his work. There is nothing in the fact that a man has been gone to his grave a hundred years, or only as many days, to justify taking liberties with his book, which we would not dare to take if he were living; and in which he may be made to speak unlike himself, either as to his style, or the character of his thoughts. 3

ADDENDUM
Supplement to the Biographical Sketch.

CHAPTER 1.Impediments which hinder souls from coming to Christ, removed.

CHAPTER 2.Helps to come to Christ.

CHAPTER 3.Rules to direct a Christian how to use the word of God for his evidence, or assurance with peace.

CHAPTER 4.Means to obtain an interest in the promises.

CHAPTER 5.How a man shall be trained up, that he may get the skill of living by faith.

Exposition of the Lord's Prayer (eBook)
Ezekiel Hopkins
Our Attitude when Evangelizing
J I Packer
The Preparation of the Preacher
Dr. Martyn Lloyd-Jones
A Simple Way to Pray
R C Sproul
God’s Eternal Decree
R C Sproul
Does God Love Everybody?
W L Bredenhof
These Detransitioners Have A Message For Distressed Girls: Mangling Your Body Is A Sickness, Not A Cure
Curated Resources
The Outrage of Jesus
D A Carson
A Superlative Guide to All 15 Elder Qualifications
David Mathis
Your Servants Are Listening
Jonathan Landry Cruse
What Does Scripture Say about the Fall of Satan?
Dustin Benge
Four Questions about the Love of God to Ask Jehovah’s Witnesses
Curated Resources
‘Jesus Has Left the Building’: Scotland’s Secular Slide—and Signs of Hope
Sarah Eekhoff Zylstra
New Insurance Data Reveals Shocking Number Of Minors Obtained Transgender Surgeries
Curated Resources
Let Not Your Heart Be Troubled
Dr. Martyn Lloyd-Jones
Our Prayers Reflect Our Relationships
Alistair Begg
The Pastor and Church Administration
Nine Marks
Worship with Your Family in 5, 15, or 30 Minutes
Jason Helopoulos
8 Ways We Normalize the Abnormal
Paul David Tripp
Why Does Paul Tell the Church to Deliver Someone to Satan? (1 Corinthians 5)
Andrew Naselli
Back and Forth with God: A Sentence That Reshaped My Relationships
Ed Welch
The Beautiful Roots of Courageous Submission
Joe Rigney
A Meal for the Journey: The Supper as a Means of Grace
Michael Haykin
Be Obedient Even When You Don’t Understand the Command
Amy Hall
Abortion Is the Opposite of Loving Your Neighbor
Jonathan Noyes
Gay Idioms Don’t Time Travel
Alan Shlemon
Reaping God’s Presence
Pierce Hibbs
Serve Others With Your Books
Scott Hurst
What is the Relationship of Regeneration to the Word that is Preached?
Dr. Martyn Lloyd-Jones
The Judgment-Mercy of God
Nicholas T Batzig
Conservatives Are Still Part Of The Problem
Samuel Sey
Limited Atonement & Shepherding
Nick Muyres
The Reformation & the Doctrines of Grace
Jeffrey Stivason
Romans 8: Reading with Thomas Brooks
Stephen Unthank
Two Dangers of Christians Facing Cultural Pressure
Doug Eaton
Humility
Dr William Barcley
Prudence
Ken Mbugua
Honor
Dr Jospeh Pipa
Honesty
Todd Pruitt
Kindness
Tyler Kenney
Diligence
Jason Allen
Justice
Ken Montgomery
Does the Church Need Anything Other than the Means of Grace?
Derek Thomas
The Means of Persevering Grace
W Robert Godfrey
True Spirituality Subverted
Bruce Little
The Left and Its Problems with Language
Robert Batule
The Blessings of Grace (eBook)
John Gill
Discourses Which Promote Peace and Holiness Among Christians (eBook)
Thomas Manton
In This House We Believe: Kindness is Everything
Daniel Stanley
Is Hell Real?
Dane C Ortlund