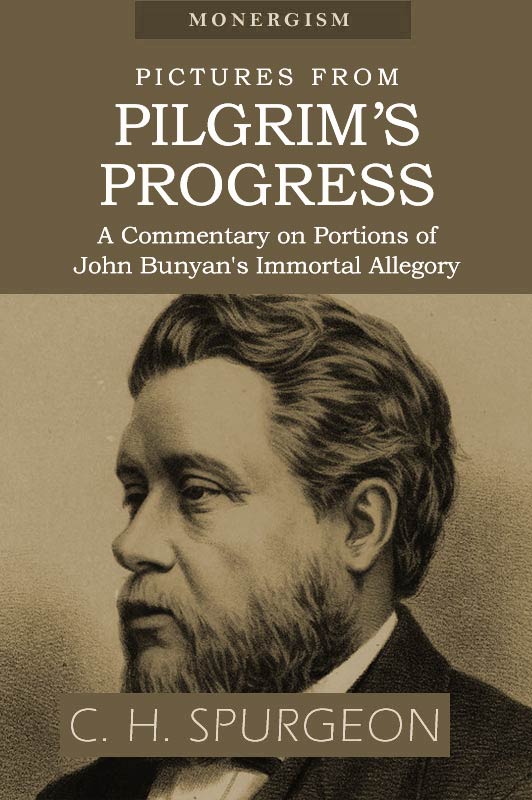 A commentary on portions of John Bunyan's immortal allegory

WHEN it was first reported to me that a series of addresses on "The Pilgrim's Progress" had been discovered, I rejoiced as one that findeth great spoil, for I hoped that after enriching the pages of "The Sword and the Trowel" these fragrant flowers might be gathered together into a delightful nosegay. In the mercy of God, my hopes have been fulfilled. Month by month, the "Pictures" have appeared, for nearly a year and a half, in the Magazine, and abundant testimony is to hand that they have proved welcome to its readers. And now the full time has come for the issue of the book, and here it is—a sparkling circlet now that the gems are strung together.

Three additional "Pictures" will be found herein, to-wit: "Christian at the Cross," "Christian and Apollyon," and "Vanity Fair." It is not a little surprising that no trace could be found of any reference in the course of lectures to these outstanding features of the story. It does not follow, however, that the great preacher passed them by. Possibly they were not reported, or the MSS. may have gone astray. A little search in C. H. Spurgeon's Sermons and other works secured sufficient, and, I venture to think, appropriate material for the missing sketches. So in love with John Bunyan, and so akin to him in faith and thought and language was the Pastor of the Metropolitan Tabernacle, that I am persuaded another volume could be compiled comprising "Pictures" of other striking scenes and characters in the glorious allegory. Who can doubt that abundant material could be found in "The Spurgeon Library" for "Pictures" of "Christian under Mount Sinai," "Hill Difficulty," "Doubting Castle," "Little Faith," "Beulah Land," and "Valiant for Truth," for instance?

There is internal evidence that these addresses were delivered at Monday-evening prayer-meetings with the special purpose of edifying such as had just begun to go on pilgrimage. "You young converts," said the preacher again and again, in his personal and incisive style. Nevertheless, the more advanced in his congregation, I am certain, were eager and delighted listeners, too. So will it be with this book. Here is milk for babes and meat for men. Moreover, the meat is such that the "babes" will enjoy a taste of it, and the "men" will be all the better for a sip or two of the milk.

C. H. Spurgeon was a past-master in the art of commenting. Who that ever heard him did not rejoice as much in his exposition of the Scriptures as in his prayers and sermons? He has commented in print on the Psalms (The Treasury of David), and on Matthew (The Gospel of the Kingdom), and on Manton (Illustrations and Mediations, or Flowers from a Puritan's Garden); and here we have his Commentary on The Pilgrim's Progress, "that sweetest of all prose poems" as he himself describes it.

It is easy to see that the Commentator is in sympathy with his Author, and that he loves his task. If Mr. Spurgeon were ever prevailed upon to fill up a page of the once-popular Confession Album, I am pretty sure that his answer to the query, "Who is your favorite author?" was, "John Bunyan." He has spoken of him over and over again as "my great favorite," and has left it on record that he had read The Pilgrim's Progress at least one hundred times. The reason for his liking is not far to seek. They both loved "The Book of Books." Urging the earnest study of the Scriptures, C. H. Spurgeon once said: "Oh, that you and I might get into the very heart of the Word of God, and get that Word into ourselves! As I have seen the silkworm eat into the leaf, and consume it, so ought we to do with the Word of the Lord—not crawl over its surface, but eat right into it till we have taken it into our inmost parts. It is idle merely to let the eye glance over the words, or to recollect the poetical expressions, or the historic facts; but it is blessed to eat into the very soul of the Bible until, at last, you come to talk in Scriptural language, and your very style is fashioned upon Scripture models, and, what is better still, your spirit is flavored with the words of the Lord. I would quote John Bunyan as an instance of what I mean. Read anything of his, and you will see that it is almost like reading the Bible itself. He had read it till his very soul was saturated with Scripture; and, though his writings are charmingly full of poetry, yet he cannot give us his Pilgrim's Progress—that sweetest of all prose poems—without continually making us feel and say, 'Why, this man is a living Bible!' Prick him anywhere; his blood is Bibline, the very essence of the Bible flows from him. He cannot speak without quoting a text, for his very soul is full of the Word of God. I commend his example to you, beloved."

Moreover, the language of The Illustrious Dreamer was to the mind of the Tabernacle Pastor. They spake the same tongue. In an address delivered in 1862 on the occasion of the restoration of Bunyan's tomb, Mr. Spurgeon assured his hearers that Bunyan's works would not try their constitutions as might those of Gill and Owen. "They are pleasant reading," said he, "for Bunyan wrote and spoke in simple Saxon, and was a diligent reader of the Bible in the old version."

It was doubtless my dear father's intention to publish these addresses, for he had commenced the revision of them. Would that he had been able to accomplish the task. They would have been much more perfect then. As it is, we have them very much as he uttered them. There is no mistaking his voice in these sententious sentences.

I fancy that if he had been spared to issue these homilies, and to write an introduction, he would have urged his readers, as he did his hearers on the occasion referred to above, to raise a monument to John Bunyan in their hearts, to become his descendants by imbibing the truth that he taught, and to keep his memory green by living in his faith.

May the perusal of these pages create a love for the book which they explain and apply, as well as for the Book with which both the writers were "saturated."

I. PLIABLE SETS OUT WITH CHRISTIAN

II. THE TWO PILGRIMS IN THE SLOUGH

III. THE MAN WHOSE NAME WAS HELP

V. CHRISTIAN AND THE ARROWS OF BEELZEBUB

VI. CHRISTIAN AT THE CROSS

X. "COME IN, THOU BLESSED OF THE LORD"

XII. WHAT FAITHFUL MET WITH IN THE WAY

XIII. WHAT FAITHFUL MET WITH IN THE WAY (concluded)

XV. "BEWARE OF THE FLATTERER"

XX. CHRISTIANA AT THE GATE AND THE RIVER

Naturalism Is Nonsense
R C Sproul
God Exalted, Man Humbled & Christ Glorified (eBook)
Jonathan Edwards
Horae Homileticae: Galatians to Ephesians (eBook)
Charles Simeon
Five Lessons Learned from Practicing Church Discipline
Tom Hicks
Simply Divine: Worshiping a God Who Lacks Nothing
Michael Reeves
Relentlessly Call Abortion What It Really Is
Jon Bloom
Social Justice (Series)
Dr. John MacArthur
Calvin's Four Rules of Prayer
Hal Wynn
Let God Speak: Hermeneutics
James White
Expressive Individualism is a Bust
Thaddeus Williams
Thy word is a lamp unto my feet, and a light unto my path
Thomas Manton
The Lord’s Prayer Teaches Us How to Pray Every Other Prayer
Kevin DeYoung
Sincere and Pure Devotion to Christ
Denny Burk
Glorifying God Includes Enjoying His Good Gifts
Stephen Kneale
Wisdom From Above: The Hope of Wisdom, Pt. 2 - Proverbs 2:1-22
Jeff Durbin
Wisdom From Above: The Hope of Wisdom - Proverbs 2:1-22
Jeff Durbin
Wisdom From Above: Wisdom's Last Laugh - Proverbs 1:20-33
Jeff Durbin
The Impossibility & Futility of Knowledge Apart From God - Proverbs 1:7
Jeff Durbin
Is God's Word only found in the Bible?
Nick Potts
The Foolish Virgins Only Desired to Look Like Wise Virgins
Ben Stahl
The Pitfalls and Possibilities of Being “Political”
Kevin DeYoung
7 Reasons Why the Gospel of John is So Special
Michael J Kruger
What We Miss When We Skip the Book of Ezra
Ryan Higginbottom
Why Romans Is the Greatest Letter Ever Written
Andrew Naselli
What the Early Church Can Teach Us about Living in This Strange New World
Carl Trueman
Why ‘Cool Church’ is no longer working with Millennials and Gen Z
Curated Resources
Judas’ Betrayal and the Providence of God
Josh Buice
The Treachery of Judas Iscariot and the Sovereignty of God over Sin
Sam Storms
Why Did Jesus Choose Judas?
John Piper
The Sovereignty of God and Christian Ministry
Richard Phillips
God’s Sovereignty in Salvation II
Michael J Kruger
God’s Sovereignty in Salvation I
Michael J Kruger
How Can a Good God Allow Evil?
Richard Belcher
Judas, Jesus and the Sovereignty of God - Part 2
Jeff Durbin
Judas, Jesus, and God's Sovereignty - Part 1
Jeff Durbin
Can You Be a Pharisee and Not Know It?
Keith Mathison
Transubstantiation: What Catholicism Teaches About the Supper
Reid Karr
Making Use of the Visible Signs: The Importance of the Sacraments in the Christian Life
Benjamin Glaser
Where Mercy and Justice Meet
Dave Harvey
Citizens and Exiles: Christians, the Church, and Culture
Scott Aniol
The Marxist Eschatology of Critical Race Theory
Darrell B. Harrison
What does it look like to make a disciple?
Steven J Lawson
How should a church engage in discipleship?
Voddie Baucham
Can you describe the Sovereignty of God? (YouTube)
James White
Kingdom Race Theology: Is This God’s Plan or Something Else?
Virgil Walker
Letters to the Seven Churches: To the Church in Ephesus (Revelation 2:1-7)
Kim Riddlebarger
Romans 8: Mortifying Sin
Stephen Unthank
Romans 8: Christ is Our Life
Stephen Unthank
Don’t Sacrifice Your Children
Paul Liberati
How Ordinary Worship Is both Reverent and Relevant
Curated Resources