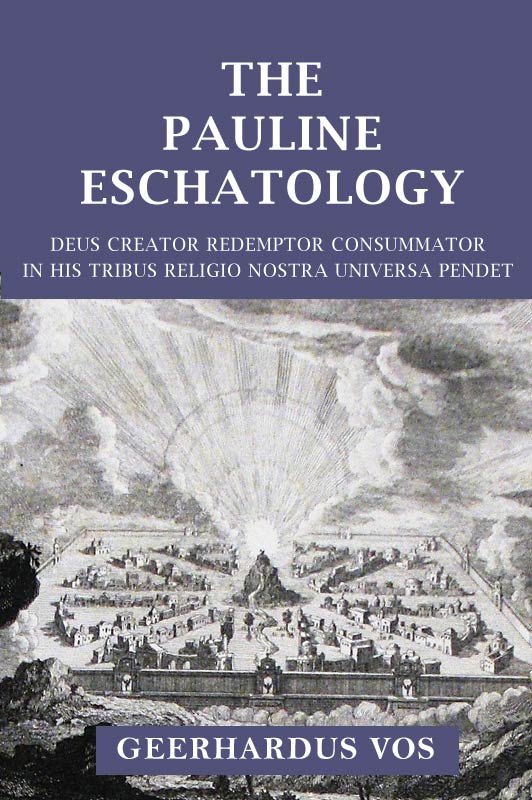 CHRISTIAN faith has at various times put widely varying appraisals on biblical eschatology. The latter was first held in esteem because of the service it was able to render to early apologetics. The two at the outset were practically identical. The vindication of the new-born faith depended on the proof that the Messiah, that great Agent and Consummator of God's world-purpose, had appeared upon the scene. Whosoever believed in this found himself drawn into the center of the eschatological movement, by prophets long foretold. It is true, this apologetic subserviency did not always work in even measure to the advantage of the Scriptural scheme of Eschatology. The Old Testament was the chief armory from which weapons had to be drawn. Even Virgil's Fourth Eclogue could not quite replace this, whatever its ultimate provenience. And as to the Old Testament, who can deny that sometimes minor and isolated correspondences were subjected to a harder strain than they ought to have been asked to bear.

At all times through the life of the Church the eschatological hope remained securely fixed upon her mind. It was an uncontroverted, accepted belief. Perhaps the retention of it may sometimes have been largely of a formal nature. But there is something about these expectations and visions of the last things, that will send them into the light and focus of the consciousness of believers, whenever storms of persecution arise and hard distresses invade. The mediaeval Roman Church seemed so unshakably fixed beyond every chance of transitoriness, and it moreover so clearly typified the true image of the ultimate city of God, that in it, one would suppose, only little soil could have been left for the cultivation of super-terrestrial fields. And yet this appearance was to some extent deceptive. The finest products of the hymnody of that Church, with their unearthly aroma still clinging to them after so many ages, are here to prove how rich a vein of piety ran through the hearts of their authors, derivable from the living waters of Paradise alone. Its hills still stood and the birds were still delighting the saints of God with jubilance from their leafy trees.

In the period of the Reformation the problem of the obtaining of righteousness before God filled hearts and minds. For the time this forced the eschatological hope into the background, although even then it would have been by no means paradoxical to say that the two strands of the justifying faith and the eschatological outlook remained closely intertwined. Paul knew the inevitableness of this and knew it better, perhaps, than the foremost heroes of the Reformation, not even Luther or Calvin excepted. While the Reformers were by no means unacquainted with the melodies of eschatological music, theirs was by preference martial music drawn from the storm and stress of the Psalter. But they received something better from Paul than either prophet or Psalmist had been able to give. Paul had been the first to grasp with his master-mind the single items of eschatological belief scattered through Scripture, and to weave them into a compact, well-rounded system, so coherent, that, speaking after the manner of man, it became next to impossible for any of the precious texture henceforth to be lost. He it was who made the single items of hope find themselves and group themselves into crystal formations with symmetrical shapes. Truly for this, not his smallest gift, he may justly be called the father of Christian eschatology.

With the rise of Rationalism Eschatology was bound to drift into troubled waters. Eschatology is preëminently historical, and Rationalism is from its cradle devoid of historic sense. It despises tradition; the past it ignores and the future it barely tolerates with a supercilious conceit of self. Moreover Rationalism is bent upon and enamored of the inward. To it the essence and value of all religion lie in purely-subjective ethico-religious experiences. Now in the eschatological process from the nature of the case, the forces of propulsion must come from ab extra. No nature-force can possibly be conceived as producing them. All that remains of interest for Eschatology in such circles can spring from a "historicizing" curiosity only. Piety it is no longer capable of kindling. And yet, there was and may still further appear to be something good from the Lord in this modernistic setback. Driven by such a storm of denial from the old pastures, not a few of the pious sought refuge out of this chill-grown world into anticipations of the world to come. We cannot help but recoil from much distorted thought and morbid emotion, that makes present-day eschatologizing propaganda unlovable. But let us be sure not to overlook even the smallest grain of golden piety that may linger in it.

And meanwhile let us learn to reconcile ourselves to this outstanding sign of the times: Eschatology has become the large mountain of offense lying across the pathway of modern unbelief. That part of it which we call Messiahship was already a piece broken from that rock in the days of Jesus. The double offense was one at bottom. Neither will be tolerated in modern religious thought. And the results will inevitably be the same. Paul divorced from his Eschatology becomes unfit for his Apostleship; Jesus divested of his Messiahship can no longer serve us as a Saviour. What boots it to strive for minor (although in themselves sufficiently important) things, when we see all these treasures the Church has gloried in and all this nourishment we have lived on, burned up before our eyes in one and the same fire? Here, certainly, is the test-limit of what shall warrant a claim to continuity with historic Christianity and the right to further retention of the name of "Christian."

CHAPTER I: THE STRUCTURE OF THE PAULINE ESCHATOLOGY

CHAPTER II: THE INTERACTION BETWEEN ESCHATOLOGY AND SOTERIOLOGY

CHAPTER III: THE RELIGIOUS AND ETHICAL MOTIVATION OF PAUL'S ESCHATOLOGY

CHAPTER IV: THE COMING OF THE LORD AND ITS PRECURSORS

CHAPTER V: THE MAN OF SIN

CHAPTER VII: ALLEGED DEVELOPMENT IN PAUL'S TEACHING ON THE RESURRECTION

CHAPTER X: THE QUESTION OF CHILIASM, IN PAUL