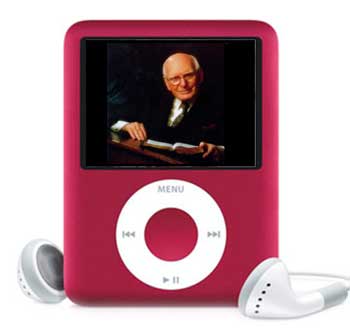 The following are the collective MP3 resources of the the Reverend William Still who ministered in Gilcomston South Church of Scotland for 52 years. Through William Still's ministry, many men (including Sinclair Ferguson and Eric Alexander) would follow in his footsteps. By the 1970s there was a network of evangelical Churches up and down Scotland committed to the systematic preachiing of the Bible. Mr Still produced weekly preaching notes under the auspices of what was known as the Didasko Press to aid his disciples in their preaching.

Character Studies, Westminster Confession of Faith, The Atonement of Christ, What is it to be a Christian?, The Ten Commandments (Exodus 20), Guidance, The Life and Work of Paul, The Devil, The Three Dimensions of the Cross,

The son of an Aberdeen fish merchant, the Rev william Still was the longest serving minister in the Church of Scotland when he retired from his charge at Gilcomston South Church earlier this year on his 87th birthday.

A leading evangelical minister in 1970 he was a founder member of the Crieff Brotherhood, a group of ministers who campaigned for the retention of traditional values and beliefs within the Kirk and who became known as the ''Stillites.'' Mr Still was born into a Salvation Army family and was self-educated from the age of 13 when illness forced him to leave school. As a teenager he followed his father into the family business but lasted only a few months claiming he couldn't stand the smell of fish. After a period as a piano teacher and then as an organist at a Methodist Church he planned to become an officer in the Salvation Army but once again ill health struck and he was forced to leave the Salvation Army training College in London. When they refused to admit him a second time he decided instead, at the age of 29, to train for the ministry at Christ's College in Aberdeen which he was able to attend while remaining at home. During a spell as an assistant at Springburn Hill Church in Glasgow he was badly injured when he fell between the platform and a train at a station in the city. It was while convalescing he underwent what he described as a ''second conversion'' and was ''all aflame with the Gospel in a new way.'' He said he was a ''fire and brimstone preacher in his early days'' and it caused him a lot of upset but he did gain a reputation for filling the pews and in 1945 he was invited to become the minister at Gilcomston South Church. When he arrived it was run down and the Presbytery had twice tried to close it down, but within months the church was so packed he was inviting people to sit a little closer together and share a hymn book. It has grown to be a major force for evangelism in the Kirk. Mr Still was no stranger to controversy and the declining standard of dress of young people attending church wearing ''drab rags and bags'' was one of the subjects on which he voiced his opinion. He also attacked TV soap opera EastEnders for portraying religion inaccurately. In spite of poor health he insisted on preaching twice every Sunday until his retirement in May. In his retirement speech he described falling church attendance and subsequent church closures as ''scandalous''. The Moderator of the General Assembly of the Church of Scotland the Rt Rev Sandy McDonald said: ''The death of William Still marks the end of a very distinguished and dedicated ministry in the Church of Scotland. ''A great bible teacher and a much loved father in the faith to countless ministers over the last 53 years, I believe he will be remembered as a good and faithful servant of Christ and the Church.'' Mr Still remained unmarried and is survived by his sisters Barbara and Rene and youngest brother David.
- GRAEME SMITH

Free-Will and Merit Fairly Examined
Augustus Toplady
The Coming of Christ Desired by Christians
Thomas Manton
On the Gradual Increase of Gospel Illumination
John Newton
The Spring-Time of Life (eBook)
David Magie
No, Christianity Is Not as Bad as You Think: 5 Statistics That Reveal It’s Good for the World
Curated Resources
The End Of The World According To Jesus
Kendall Lankford
The Fundamental Significance Of The Lord’s Supper (pt 1)
B B Warfield
How “You Do You” is Leading to Narcissism and a Mental Health Crisis
Akos Balogh
5 Quick Takes for New Culture Wars
Trevin Wax
How to Make the Case against Abortion in Less Than a Minute
Amy Hall
5 Reasons Why We Should Not Stop Using Male Pronouns for God
Sharon James
The Parable of the Ten Virgins
Matthew Henry
What the Word of God Says About the Word of God, Book by Book
Jared Wilson
Good Theology is the Answer to Bad Technology
Rev David P Murray
The Thing About Light and Momentary
Tim Challies
John Witherspoon, Protestant Statesman
Curated Resources
On tradition
Scott Swain
How I Would Explain a Christian View of Transgenderism to a Non-Christian
Samuel James
Don’t Title People “Pastor” If They Aren’t An Elder
J. A. Medders
Love Not the World
Dr. Martyn Lloyd-Jones
The Origin of TULIP
Mr Andrew Myers
How to Think about Christianity and Politics
Kevin DeYoung
Christians Must Protest Pride Parades and Their Violent, Sodom-like, Riotous Stonewall Origin
Grant Van Leuven
Why the Message of Salvation Is Evidence of the Truth of Christianity
Neil Shenvi
How OT Scriptures Changed the Course of History at the Jerusalem Council
Gregory R. Lanier
Experimental and Practical Views of the Atonement (eBook)
Octavius Winslow
The Redeemer's Tears Wept Over Lost Souls (eBook)
John Howe
Beware the Natural Ways: Finding Peace in God's Purposes and Plans
Benjamin Glaser
Pride: A Christian Response
Jacob Tanner
Psalm 56:3: When You’re Afraid Trust in God
Grant Van Leuven
A Tip for Serving Your Waiter
Greg Koukl
The End Of The World In Malachi
Kendall Lankford
Sexual Ethics and the Sanctity of Human Life: How Biblical Sexual Morality Dignifies Women and Children
J. Alan Branch
Images of Christ: Reconsidering a Common Exception
James Norris
What Is Catechesis and What Role Do Bible Stories Play in It?
Kevin DeYoung
The Courage To Be Presbyterian
Jon Payne
How should a believer respond to false accusations?
Stephen Le Feuvre
The Doctrine of Providence
Dr. Martyn Lloyd-Jones
Making and Keeping Friends in Ministry
Aaron Lumpkin
Advice for Pastors: Young and Old
Tony Merida
Leadership & Integrity
Daniel M Doriani
The Doctrine of Salvation
Dr. Martyn Lloyd-Jones
On The Rapture theory
R C Sproul
On the Vice of Forgetfulness (Or, Why Theological Retrieval is Necessary for Cultural Warfare)
Samuel G. Parkison
If "Representation" is the Issue, Where Are Pixar's Religious Characters?
Samuel James
A Culture That Celebrates Dismembering Children In The Womb Can’t Understand Why It’s Afflicted With Mass Shootings
Kylee Zempel
Progressive Christianity: A Biblical Response
Michael J Kruger
Cross Bearing
Abraham Kuyper
The Mission of Sorrow (eBook)
Gardiner Spring
What My Father Did Not Tell Me
Marvin Olasky