Memoir of the Life and Character of Rev. Asahel Nettleton. D. D. (eBook) 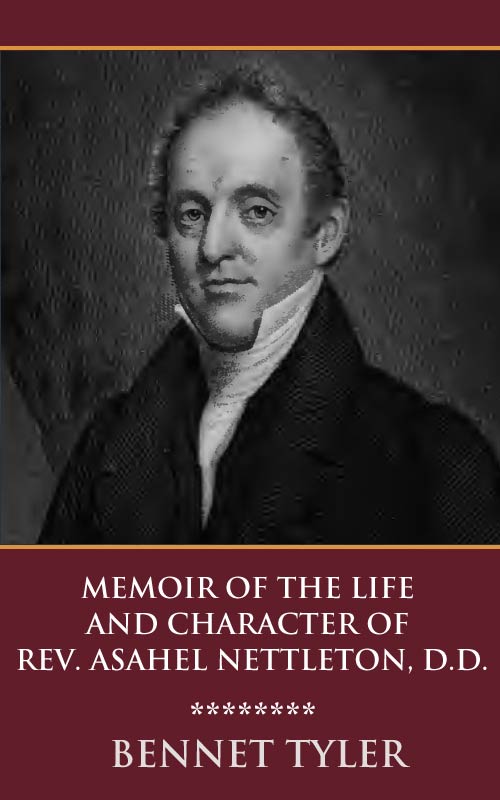 It has been well said, that “mere human greatness is an unenviable distinction. But the man with whose greatness is combined moral excellence to direct and adorn it, is allied to Jesus Christ. God has from time to time given to his church, men not only of extraordinary intellectual powers, but with minds so pre-eminently sanctified, as to render them suitable agents for the accomplishment of his purposes on earth.” That some account of the lives of such men should be preserved, and handed down to posterity, few will deny. This should be done, not for the purpose of glorifying men who, however useful they may have been, are only instruments by which God accomplishes his purposes; but to magnify the grace of God, and to promote the interests of the Redeemer’s kingdom. The influence of example in forming the human character, is confessedly great. Hence the utility of contemplating the examples of the wise and good. “If,” as one observes, “religion appears lovely when portrayed merely in the simplicity and amiableness of her principles, how much more lovely when exhibited in the purity and benevolence of her conduct. When we see something more than right views and dispositions; when we behold not the portrait, but the living features of her excellence, her image sinks deep into the soul.”

Much of the instruction of the sacred scriptures, is communicated under the form of example. Besides the perfect pattern set by Christ for our imitation, we are pointed to the example of the ancient saints, “who through faith and patience inherited the promises.” We are reminded of the trials through which they were called to pass — of the temptations by which they were assailed — of the persecutions which they endured. We see them making their way to heaven “through much tribulation,” and at length coming off “conquerors and more than conquerors through him that had loved them.” That the contemplation of these examples is suited to stimulate and encourage believers in the Christian race, there can be no doubt. Why then should not the biography of good men of a later period have a similar effect? Who can doubt that the perusal of the memoirs of Doddridge, of Edwards, of Brainerd, of Martyn, of Hallock, of Payson, and of others, has been the means of quickening, and encouraging thousands of the people of God, and of promoting the work of sanctification in their hearts’?

Among those who were at all acquainted with the subject of this memoir, or who have heard of the extensive good of which he was made the instrument, there will be but one opinion as to the importance of preserving some memorial of his life and character. He was no ordinary man; nor was he raised up for an ordinary purpose. Very few men have ever lived, who have been the honored instruments of turning so many souls “from darkness to light and from the power of Satan unto God.” Thousands have acknowledged him as their spiritual father, who it is believed, will be his joy and crown in the day of the Lord. Of these, many were called before him to their heavenly rest, and have doubtless welcomed him to their blissful society. A great number still remain, to pray and labor for Zion. Of his spiritual children, many are ministers of the gospel; each one of whom is ready to exclaim in the language of Elisha, when witnessing the ascension of Elijah, “My father, my father, the chariot of Israel, and its horsemen.” And many ministers who were not his spiritual children, received an impulse from his preaching and example, either before or after they entered the ministry, which had a most salutary influence upon their character. The following statement of one who occupies a post of great responsibility in the church, I have no doubt, expresses the views and feelings of many others. “In my preparation for college, and in my first year in college, I had the happiness to hear him preach in two very powerful revivals; and I shall ever regard the influence which his preaching and his personal intercourse with me, exerted upon my character and views of ministerial duty, as of inestimable value.”

The days in which he had health and strength to engage in arduous labor, were emphatically days of the right hand of the Most High. They will long be remembered on earth, and never be forgotten in heaven.

A letter written by the Rev. Dr. Beecher in 1827, contains the following testimony:

“Mr. Nettleton has served God and his generation with more self-denial, and constancy, and wisdom, and success, than any man living. I witnessed his commencement, and knew his progress, and the relative state of things in Connecticut, especially; and what (but for his influence in promoting revivals, and exciting and teaching by example others to promote them) might have been the condition of the churches in those days of revolution through which they have passed. Considering the extent of his influence, I regard him as beyond comparison, the greatest benefactor which God has given to this nation; and through his influence in promoting pure and powerful revivals of religion, as destined to be one of the greatest benefactors of the world, and among the most efficient instruments of introducing the glory of the latter day.” This was the testimony of one who had known the history of his labors for fifteen years, and who had witnessed their great and salutary influence.

“His holy zeal,” says another minister, in a letter written soon after his death, “his tenderness and love, his prudence and judgment, and his admirable skill in presenting divine truth, and dealing with souls, made him at once, one of the most inspiring, and one of the safest examples to be presented before Christians, and especially before ministers.”
Another minister, in a letter to the writer, says:

“I am gratified to learn, that you intend to publish as soon as practicable a biographical sketch of our much esteemed and beloved friend, the late Dr. Nettleton. This I regard as due to the memory of the deceased, to his numerous friends in different parts of the land, and to the cause of truth and vital godliness, which he advocated so ably and successfully, through the different periods of his ministry. It would be matter of unfeigned regret, if the wisdom, zeal, stability, spirit of kindness, and unconquerable perseverance in the work of the Lord which were such prominent characteristics of that man, should not be permitted to benefit others after he is silent in the grave.

“That he uniformly regarded himself as an accountable steward of God, and studied to show himself approved — that he was a devoted servant of the church, in laboring for its enlargement and growth in grace — that he wielded the sword of the spirit most dexterously for the conversion of men to God — that he was a vigilant and judicious guide and counsellor— that he strove to build up those who were spiritually begotten by him in the most holy faith — and that he was a timely and efficient helper of his ministerial brethren, are facts too obvious to need proof, to those who have been conversant with him for the last twenty-five years.”

Dr. Nettleton kept no journal of his religious exercises; nor until 1818 did he keep any journal of his labors. In the spring of that year, while laboring in Rocky Hill, he began to keep a memorandum, in which he noted down the times and places of preaching, and the texts from which he preached, together with occasional brief remarks. Many of the facts recorded in this memoir, were obtained from him in personal interviews, and committed to writing at the time. The reader may be assured that nothing is stated as fact, of which the writer has not either personal knowledge, or the most satisfactory evidence.

Should the imperfect sketch which is here given of the life and character of this distinguished servant of God, be the means of inciting others to imitate his example, so far as he followed Christ, the labor of preparing it will be abundantly compensated.

PREFACE TO THE SECOND EDITION.

CHAPTER 10. His method of laboring in revivals of religion.

CHAPTER 11. Character of the Revivals under his preaching.

CHAPTER 14. His last Sickness and Death.