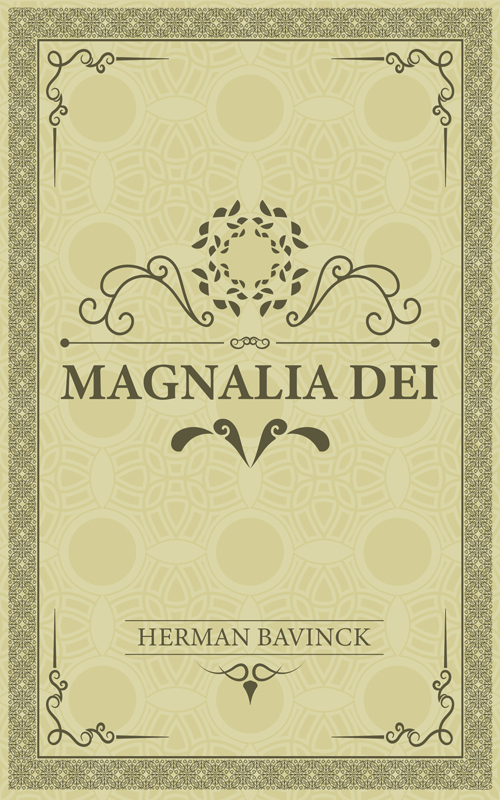 Under the title of Magnalia Dei, the great works of God, I wish in a book of modest dimensions to give a simple explanation of the Christian faith, as it has been professed by the Reformed Churches of all countries and times.

The name is taken from Acts 2:11. There it is told that the disciples of Jesus, as soon as the Holy Spirit had been poured out on them, began to proclaim the great works of God in languages understood by all. These great works of God certainly do not refer, as is sometimes the case elsewhere, to one specific event, such as, for example, the resurrection of Christ, but to the entire household of salvation which God had brought about through Christ. And the Holy Spirit was poured out precisely in order that the congregation might learn to know these works of God, glorify them, and thank and praise God for them.

Therein lies the idea that the Christian religion does not exist merely in words, in a doctrine, but that it is, in word and fact, a work of God, which was brought about in the past, is being worked out in the present, and will only be completed in the future. The content of the Christian faith is not a scientific theory, nor a philosophical formula for explaining the world, but a recognition and confession of the great works of God, which are being created through the ages, encompass the entire world, and will only be completed in the new heaven and the new earth, wherein dwells righteousness.

This is no longer generally or sufficiently understood. The knowledge of the truth, which is according to godliness, is steadily declining. The interest in the mysteries of the kingdom of God is diminishing day by day, not only outside but also within Christian circles. And the number of those who live by the truth with their whole heart and soul and who feed upon it day by day is steadily diminishing. Those who still accept it often see in it see in it only a set of teachings, which may be worthy of belief, but which are out of touch with life and have little or nothing to do with the present.

There are several reasons for this sad state of affairs.

All those who are preparing for or working in one or another profession are nowadays subjected to such heavy demands that there is no pleasure or time left for other work. Life has become so rich and so broad on all sides that an overview of it can only be obtained with great effort. Political, social and philanthropic interests demand more and more of our time and strength. The reading of daily and weekly newspapers, magazines and brochures consumes our free time. There is neither the desire nor the opportunity to study the Scriptures or old works of theology.

Besides, those old works are no longer of our time. The difference in language and style, in thought and expression, makes them alien to us. The issues that were once considered the most important have lost all or most of their significance for us. Other interests, not mentioned by them, are now pushing their way into the foreground. Enemies whom they fought no longer exist, have been replaced by others, or at any rate are acting against us in a completely different armor.

We are children of a new era and live in a different century. And it is a waste of time to want to maintain the old forms and to persist with the old, just because it is old.

But not only would this be useless, it would also contradict our own confession. Precisely because the Christian faith is the recognition of a work of God that began in the beginning of time and is continued in this century, its essence is the fruit of time, but its form is contemporary. No matter how much good Franks's Kern, Marck's Merg and Brakel's Redeemer's Religion may have done in earlier days, they can no longer be revived today, they no longer appeal to the younger generation, and they involuntarily awaken the thought that Christianity is no longer appropriate for this century. Therefore, there is an urgent need for a work that can take the place of the work of the fathers and present the old truth in a form that satisfies the demands of our time.

Much good has already been done in this direction. Since the Reformed religion and theology came to revival and new growth in the last century, there has been no lack of attempts to adapt the old confession to modern consciousness. What Dr. Kuyper, in particular, has contributed through his many works, especially his rich Catechism statement, is hardly to be overestimated. But still a work is lacking that explains the contents of the Christian faith in the usual way to the wider circles of the people and remains within their reach through its modest size and price.

The instruction in the Christian religion, which is offered to the congregation in this book, tries to fill this gap. The attempt will certainly not reach the ideal that the author of this handbook on Reformed religious doctrine has in mind. But an awareness of weakness must not lead to despondency and worklessness, but rather must stimulate one to exert all one's strength and compel one to trust in the help of Him who accomplishes His strength in weakness.

As readers of this work, I do not imagine those men of learning who can acquaint themselves with the rich and profound thoughts of Scripture, which have been formulated in Reformed theology. But in compiling this work I have had in mind the ordinary members of the congregation, who prepare themselves by means of catechism for admission to Holy Communion or who continue to have an interest in the knowledge of the truth. And among them I have thought especially of all those young men and women, who at a relatively early age are often already being trained for their future profession in a workplace or factory, in a store or office, in schools of higher education or in grammar schools, and there often come into contact with the many objections to which the Christian religion is exposed at present.

There are many among them who are still eager to believe, but to whom it is made extremely difficult by the environment in which they live and by the objections and contradictions they hear. In any case, their confession is devoid of cheerfulness and enthusiasm. And yet, it must come to that again, and it will again, if the truth is rightly understood. When the works of God are considered in their own light, they naturally give rise to admiration and worship. Then we see that the Christian faith not only has much to recommend it, but that it also boasts an internal beauty, and that it is a product of its inner truth and glory, and that it recommends itself to the consciences of mankind. Then we thank God, not that we must, but that we may believe. Then we realize to some extent what our faith has to do with our thinking and our life. And each in his or her own language we then begin again to proclaim the great works of God.

This work was translated directly from the public domain Dutch edition, to English by computer generated auto-translation. No other English translation was consulted or referenced. While this work has been previously translated, and re-edited under various names such as “Our Reasonable Faith,” and “The Wonderful Works of God,” this is not a paraphrase, summary, rewording, re-edit, republication, or reflection of any previously published English translations; including the forementioned or otherwise. Any similarity is strictly coincidental, non-intentional, and specifically the output of a translation software algorithm. The text of this work is not copyrighted, nor can it be since it is not the work of a human author; except the author who originally wrote this work in the public domain Dutch edition. With the exception of hand-correcting a few obvious errors which were made by the translation software. this is a computer translated, verbatim production of that public domain work. The intention of this work is to re-release it to the public domain. For this publication; no commercial, for-profit, trade for goods, are exchange of monetary value is intended in its distribution. This is a public domain, free, non-profit, non-exclusive, non-copyrightable translation of the original Dutch edition. This English production is not only not the work of a human mind in any capacity (except for the original Dutch edition that it is based on) but the exact translation can be mimicked innumerable times by simply imputing the same source document, in the same translation program; by anybody, at any time. If you would like to report any errors found in the text or have any questions please contact Monergism at [email protected] or write us at PO Box 491, West Linn, OR, 97068

2 THE KNOWLEDGE OF GOD

4 THE VALUE OF GENERAL REVELATION

5 SPECIAL REVELATION (The mode of revelation).

9 THE BEING OF GOD

10 THE TRINITY OF GOD

12 ORIGIN, NATURE AND DESTINY OF MANKIND

14 THE COVENANT OF GRACE

15 THE MEDIATOR OF THE COVENANT

16 THE DIVINE AND HUMAN NATURE OF CHRIST

17 THE WORK OF CHRIST IN HIS HUMILIATION

18 THE WORK OF CHRIST IN HIS EXALTATION

19 THE GIFT OF THE HOLY SPIRIT

23 THE CHURCH OF CHRIST