Life in a Risen Saviour (eBook) 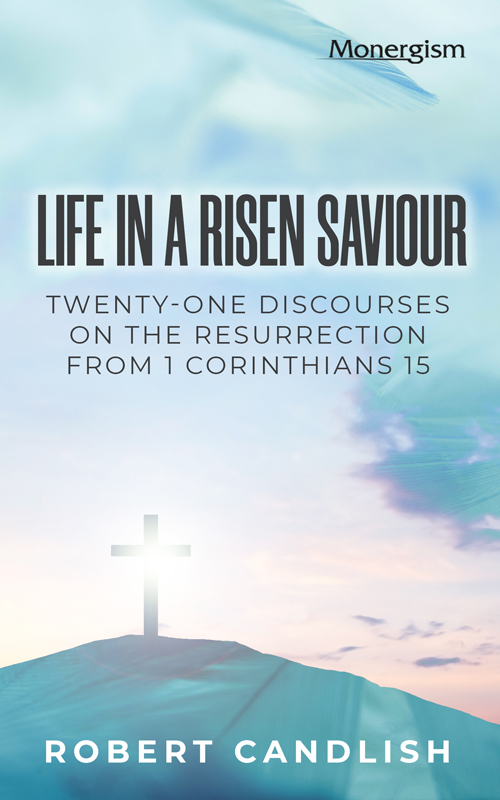 Twenty-one Discourses on the Resurrection from 1 Corinthians 15

I HAVE endeavoured, in these Discourses, to illustrate the line of argument pursued by the Apostle. It is not, as I apprehend it, an argument about the resurrection generally. It has respect to one particular view of the resurrection; its bearing on the believer's spiritual and eternal life. I have sought to trace the line of thought which gives unity and coherence to the Apostle's reasoning. I have by no means, however, aimed at anything like a complete commentary or exposition. I have rarely discussed different interpretations, and have abstained from minute criticism. There is no attempt, on my part, to occupy the place already so well filled by such learned and acute scholars as Dr. John Brown, and other recent writers, who have bestowed research and study on the examination of this portion of Scripture. I have not quoted authorities. But I must name Isaac Taylor's "Physical Theory of Another Life," as having suggested interesting lines of thought connected with the future state.

I crave indulgence for some diffuseness, as well as for occasional repetitions, not easily to be avoided in a series of compositions for the pulpit, prepared often hastily from week to week, and all having reference, more or less directly, to one theme. I might have recast what I had thus prepared, so as to give it the form of a more compact treatise. But that is always an irksome task,—and not always a successful one. I have thought it best to publish the Discourses very much as they were when I preached them.

DISCOURSE I. 1 Corinthians, 15:1, 2.—The consistency of Paul's preaching, and its acceptableness

DISCOURSE II. 1 Corinthians 15:3–11.—The substance of Paul's preaching, and its evidence

DISCOURSE III. 1 Corinthians 15:12–17.—If there is no resurrection, Christ is not risen, and we are yet in our sins

DISCOURSE V. 1 Corinthians 15:20–23.—But Christ is risen, and is become the first-fruits of them that sleep

DISCOURSE VI. 1 Corinthians 15:24–28.—The end; the delivering up of the kingdom to the Father

DISCOURSE VII. 1 Corinthians 15:29–32.—Why baptism for the dead, and other hazards? Why not live for the passing day?

DISCOURSE IX. 1 Corinthians 15:35–38.—How are the dead raised?—Not as they die—Analogy of the bare grain yielding ripe fruit

DISCOURSE X. 1 Corinthians 15:39–42.—Varieties of bodies in nature—Terrestrial and celestial

DISCOURSE XII. 1 Corinthians 15:44.—The natural and the spiritual body

DISCOURSE XV. 1 Corinthians 15:53, 54.—"Flesh and bones"—Kinsmanship, and community of nature

DISCOURSE XVII. 1 Corinthians 15:55, 56.—The sting of death—Sin—The strength of sin—The law—Victory the free gift of God in Christ

DISCOURSE XVIII. John 11:25, 26.—Christ the resurrection and the life

DISCOURSE XIX. 1 Corinthians 15:58.—Steadfastness in the faith of the resurrection

DISCOURSE XX. 1 Corinthians 15:58.—Abounding in the work of the Lord—Its reward—Resumption of it