The Life and Choice Works of Isaac Watts (eBook) 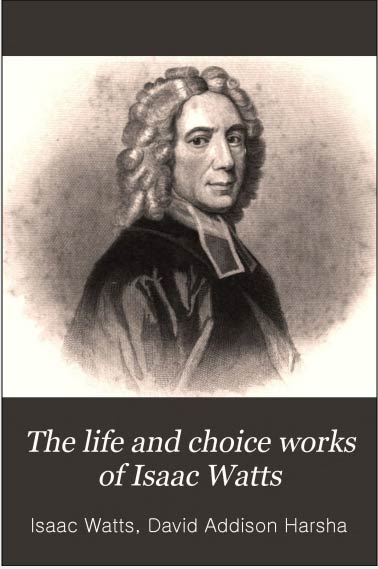 A big thanks to Thomas and Colleen Witte for scanning, editing and making this classic work available.

In preparing a series of volumes to be styled the STANDARD LIBRARY or SACRED CLASSICS, containing, in a form adapted for popular use, the best works of eminent divines, with memoirs of their lives, notices of their writings, and estimates of their genius, we believe that we render an acceptable service to the Christian public. For what person, whose heart glows with love and gratitude to the Author of the Christian revelation, does not feel a deep interest in the lives and writings of such venerated divines as Taylor, Howe, Baxter, Owen, Watts, Doddridge, Fuller, Hall, Chalmers, Edwards, Dwight, and others of kindred spirit? Their praise is in the gospel throughout all the churches; and their lofty genius and fervent piety will excite the admiration of the Christian world in all future ages. It is certainly delightful, as well as profitable, for the Christian in his pilgrimage, frequently to review the lives and study the practical and devotional works of these zealous ambassadors of Christ, who through faith and patience are now inheriting the promises.

In addition to the biographical sketches, our selection will comprise many valuable treatises not readily accessible. The principal object, in the present series, will be the collection of such matter only as shall be highly conducive to the mental, moral, and religious improvement and elevation of readers of all evangelical denominations.

This volume, which is the first in the series, contains the life and choice works of ISAAC WATTS.

In the biographical memoir, we have endeavored to present, in a clear, succinct, and chronological order, the leading incidents in his long and useful life. Solicitous to render the memoir as interesting as possible to the Christian reader, we have carefully consulted the best authorities on the subject, such as Milner's Life, Times, and Correspondence of Watts; the Memoirs of Watts by Gibbons, Burder, Johnson, and Southey; and Wilmott’s Lives of the English Sacred Poets.
The “choice works” which have been selected, are the Discourses on Death and Heaven—Discourses on the Love of God, etc.—An Exhortation to Ministers—Select Sermons—Miscellaneous Thoughts—and Poems.

In the opinion of the excellent Dr. Doddridge, these are the most admirable works of their author. “I most admire,” says he, “the first volume of his sermons—Death and Heaven—the Love of God—and Humble Attempt—not to mention his incomparable Lyric Poems, Psalms and Hymns. ”In a letter to a friend, the saintly JAMES HERVEY thus highly commends the small volume of Dr. Watts on The Love of God, and its Influence on the Passions: “This is indeed a most excellent book, happily calculated for usefulness. If you have never seen it, you have a pleasure yet to come, and I would by all means advise you to get it” And the late venerated WILLIAM JAY, of Bath, once remarked, in relation to the sermons of Watts, which he always highly valued: “They are truly beautiful sermons. His ‘Inward Witness to Christianity,’ his ‘Hidden Life of a Christian,’ his ‘Peace in Death,’ his ‘No Night in Heaven,’ and ‘No Pain among the Blessed,’ his ‘Joy at the Resurrection,’ are among the sweetest and most profitable sermons in our language.” Every intelligent, pious, and discriminating person, who is well acquainted with the sermons of our most celebrated divines and those of Dr. Watts, will, we think, readily coincide in this opinion of Mr. Jay.

It is particularly interesting to know that the book on “Death and Heaven” was a favorite with Doddridge while suffering under his fatal disease, in a foreign land; and that it soothed and cheered his spirit within a short period of his death. This single statement of its usefulness to one of the most distinguished and pious servants of Christ should commend it to the careful attention of every Christian pilgrim, steadily approaching the river of death, and expecting an ETERNITY OF GLORY beyond the shores of time.

The believer will find, in the present selection, much to sustain and soothe him while journeying through the sorrows and conflicts of the Christian course, and to enliven his pathway to that better land where there is no night, no pain, no tears, no death,—where the wicked cease from troubling, and where the weary are at rest.

In the hope that it may prove acceptable to clergymen, instructive to Christian families, and interesting to all readers, the first volume of the STANDARD LIBRARY OF SACRED CLASSICS is now offered to the public.

Note: We recognize that Watts has some erroneous theology in his views of the Trinity  Posting this book is, therefore, not a blanket endorsement of Watts' theology.

DISCOURSE I. The conquest over death, described in a funeral discourse in memory of the Lady Hartopp.

SECTION I. DEATH AN ENEMY EVEN TO GOOD MEN.

SECTION III. THE DESTRUCTION OF DEATH.

SECTION IV. BLESSINGS GAINED BY THE DESTRUCTION OF DEATH.

DISCOURSE II. The happiness of separate spirits, &c. Attempted in a funeral discourse in memory of Sir John Hartopp.

SECTION I. OF THE SPIRITS OF THE JUST.

SECTION II. OF THEIR PERFECTION IN KNOWLEDGE, HOLINESS, AND JOY.

SECTION III. OF THE VARIOUS KINDS AND DEGREES OF THE EMPLOYMENTS AND PLEASURES OF HEAVEN.

SECTION IV. OF THE INCREASE OF THE SAINTS ABOVE IN KNOWLEDGE, HOLINESS, AND JOY.

SECTION V. OF THE MEANS OF ATTAINING THIS PERFECTION.

SECTION VII. THE CHARACTER OF THE DECEASED.

SECTION VIII. AN ADDRESS TO THE FRIENDS AND RELATIVES OF THE DECEASED.

DISCOURSES OF THE LOVE OF GOD, AND ITS INFLUENCE ON ALL THE PASSIONS: With A Discovery Of The Right Use And Abuse Of Them In Matters Of Religion. A Devout Meditation Is Annexed To Each Discourse.

DISCOURSE I. THE AFFECTIONATE AND SUPREME LOVE OF GOD.

DISCOURSE III. THE USE OF THE PASSIONS IN RELIGION.

DISCOURSE IV. INFERENCES FROM THE USEFULNESS OF THE PASSIONS.

DISCOURSE V. THE ABUSE OF THE PASSIONS IN RELIGION.

DISCOURSE VI. THE AFFECTIONATE CHRISTIAN VINDICATED, AND THE SINCERE SOUL COMFORTED UNDER HIS COMPLAINTS OF DEADNESS, &c.

AN EXHORTATION TO MINISTERS.

SECTION I. or A MINISTER'S PERSONAL RELIGION.

SECTION IV. OF THE CONVERSATION OF A MINISTER.

SECTION V. A SOLEMN ENFORCEMENT OF THESE EXHORTATIONS ON THE CONSCIENCE.

SERMON I. THE END OF TIME.

SERMON II. NO PAIN AMONG THE BLESSED.

SERMON III. NO NIGHT IN HEAVEN.

SERMON IV. SAFETY IN THE GRAVE, AND JOY AT THE RESURRECTION.

SERMON VI. DEATH A BLESSING TO THE SAINTS.

SERMON VII. THE HIDDEN LIFE OF A CHRISTIAN.

SERMON VIII. THE HIDDEN LIFE OF A CHRISTIAN.

A MEDITATION FOR THE FIRST OF MAY.

DIVINE GOODNESS IN THE CREATION.

VANITY INSCRIBED ON ALL THINGS.

THE RAKE REFORMED IN THE HOUSE OF MOURNING.

THOU HAST RECEIVED GIFTS FOR MEN.

O THAT I KNEW WHERE I MIGHT FIND HIM!

THE DAY OF JUDGMENT.

BREATHING TOWARD THE HEAVENLY COUNTRY. 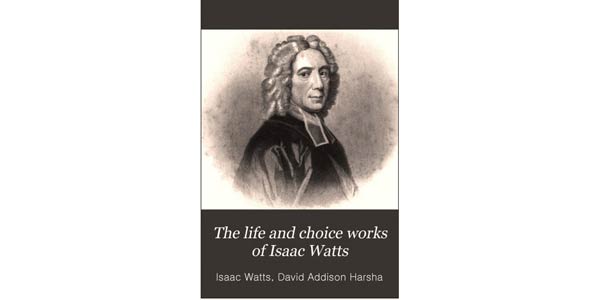 Help! I Love Jesus but Not the Church
Dustin Benge
Help! I'm Raising a Modalist
Curated Resources
Why Is the Book of Acts So Focused on Peter and Paul?
Richard B Gaffin Jr
What Is the Sin that Leads to Death? (1 John 5)
Ray Van Neste
What Does It Mean to Pray “Your Kingdom Come”?
Kevin DeYoung
Postmodernism’s Revenge
Kevin DeYoung
Old New Calvinism: The New School Presbyterian Spirit
Dr. S. Donald Fortson
Why Gentleness in Ministry Matters More Than You Think
Michael J Kruger
How to Wait Patiently for the Lord’s Return
Doug Eaton
The Internet Is More Powerful Than the Printing Press
Chris Martin
Is Richard Rohr’s ‘Universal Christ’ Christian?
Ian Paul
Seven principles for cultivating a Christian posture toward the world
Kevin DeYoung
Overcoming Doctrinal Pride
Matt Foreman
The Rhetoric of Puritan Preaching
Joseph Steele
The Final Word - Hebrews 1:1–2:18
Kevin DeYoung
Simplicity in Preaching
Kevin DeYoung
The Order of the Decrees
Leonard De Moor
Marks of a Good and Faithful Theologian
Trevin Wax
Dear Mrs So and So
Kendall Lankford
Who Is to Blame for Tragedy? A Look at Jesus’ Answer in Luke 13:1-5 and John 9:1-3
Kim Riddlebarger
A Rebuilt Temple in Jerusalem?: A Look at Ezekiel's Vision in Chapters 40-48
Kim Riddlebarger
‘This Was Pure Evil’: The Necessary and Accurate Moral Declaration About the Racially Charged Shooting in Buffalo
Albert Mohler
Every knee shall bow
Albert Mohler
Loving Across the Ideological Fence
Blake Long
40 Random Pieces of Advice for the Christian Life
Tim Challies
Learning to Forgive
Blake Long
Homosexuality Comes to Church: Standing Firm in a Culture That Embraces Chaos
M. D. Perkins
Does Science Really Contradict Scripture?
Vern S Poythress
Face Your Fear of Man: How Christ Delivers from Human Approval
Greg Morse
Can a Christian Fall Away?: How to Hear the Warnings in Hebrews
Jared Compton
4 Reasons We Should Study the Book of Revelation
Nancy Guthrie
6 Basic Realities about a Man's Identity
David Powlison
The Saints' Everlasting Rest (eBook)
Richard Baxter
Gender Dysphoria and Adverse Childhood Experiences
Walt Heyer
Screaming in the Face of Death
Zack Groff
Why I got out of Twitter
Ray Ortlund
Why Pro-Abortion Activists Desecrate Churches
Carl Trueman
Israel's Hope Encouraged (eBook)
John Bunyan
When Food Leads to Idolatry
Ken Montgomery
Practical Sermons To Be Read in Families and Social Meetings (eBook)
Archibald Alexander
A Discourse of the Object of Faith
Stephen Charnock
Taking Unpopular Stands in a Strange New World
John Stonestreet
Lessons from mainline decline
Kevin DeYoung
The Psychology of Manipulation: 6 Lessons from the Master of Propaganda
Curated Resources
My Slave, My Choice
Nathan Eshelman
The Lost Art of Courage
Keith A. Evans
Tim Keller & Myxomatosis Christians
Rod Dreher
Theology for the People (eBook)
William S Plumer
Sermons on the Most Interesting Doctrines of the Gospel (eBook)
Martin Luther
One People or Two? The Challenge Raised to Dispensationalism by Ephesians 2:11-22
Kim Riddlebarger