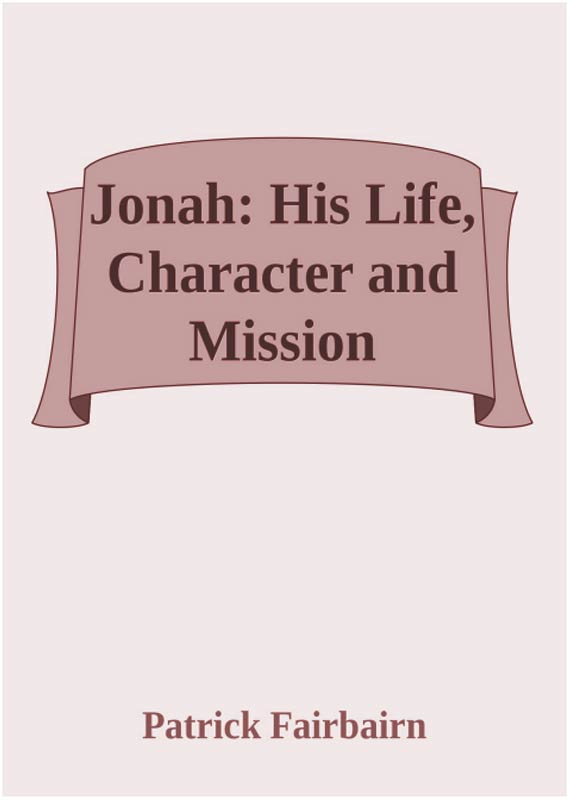 A big thanks to Thomas Witte for scanning, editing and formatting this ebook.

A peculiar and somewhat mournful interest hangs around the life and labours of Jonah, not surpassed, in some respects scarcely equalled, by that which attaches to any other of the Old Testament prophets. The elements both of evil and of good wrought with unwonted energy in his experience—at one time depressing him to the lowest depths, and anon raising him to a kind of supernatural elevation. Cast upon degenerate times, when the foundations of the earth were out of course,-and the kingdom of God was, in a manner, forced to strike out into new and unexpected channels, it was his lot to tread strange and mysterious paths—paths equally remarkable for the sore troubles and the glorious achievements through which they conducted him— though himself meanwhile so ill prepared for the times, or the times so hardly set for him, that the bright, not less than the dark and cloudy, periods of his life served only to feed the well-spring of his sorrow and dejection.

Unhappy prophet! unhappy, too, in his posthumous connexion with the world, as well as in his personal sojourn in it; for the troublous spirit that attended him through life seems still to have slumbered in his ashes. Reproach and dishonour have been heaped upon his name amongst men. The adversaries of the truth, and not these only, but also its zealous friends and defenders, have shot many a bitter arrow at him, and have thought they improved the record of his singular history according as they enforced against him charges of transgression, and expressed their abhorrence of his character. Not so "the greater than he," whose servant and forerunner he was, and who once and again pointed an evil and adulterous generation to the wonderful experience and history of Jonah as already containing the elements of his own, and as pregnant with lessons of highest wisdom to those among whom he lived. And, following in his footsteps, we also have sought to honour the son of Amittai, yea, to vindicate his title to a distinguished place among those who have done and suffered much for the cause of God—men of noble hearts and devoted lives—in whose very failings we still discern the lofty and self-denying spirit that animated their bosom.

What we have written, however, in the following pages, is not to be regarded simply, nor even chiefly, in the light of a vindication. The aim rather has been to give a clear and just representation of the times of the prophet—of the nature and design of the singular mission he was appointed to fulfil—and of the varied instruction which is furnished for believers of every age by the mission itself, and the manner in which it was discharged. The work assigned this prophet marked in some respects a new era in the providence of God toward his Church; it unfolded principles of government and ways of dealing, which again reappear in other portions of prophetical scripture more fully developed and variously applied; so that the consideration of the book of Jonah, besides the other advantages it yields, furnishes some sure and well-defined landmarks for guiding our way to a sound interpretation of the word of prophecy. To sincere and earnest students of that word the author presents this volume, as a small contribution toward the right understanding of those portions of prophecy which come within its range, and to all in general who desire to cultivate an intimate acquaintance with the records of God's revealed will. May the Lord be pleased to accept the effort here made to discover his truth, and manifest his ways to the children of men!

CHAPTER I: Introductory - The Time and Circumstances Of Jonah's Appearance as a Prophet.1

CHAPTER 2: The Prophet's Commission To Go To Nineveh—Why Given? And For What Ends?. 15 :

CHAPTER 3: Jonah's Behaviour On Receiving The Divine Commission, And The Extraordinary Means Taken To Reclaim Him From His Backsliding.. 33

CHAPTER 4: Jonah In His Distress An Example Of Sanctified Affliction. 48

CHAPTER 5: In What Respects The Things Which Befell Jonah Rendered Him A Sign. 62

CHAPTER 6: The New Commission Given To Jonah, And The Wonderful Results That Flowed From Its Execution. 81

CHAPTER 7: God's Change Of Purpose At The Repentance Of Nineveh, And The Light Thereby Furnished For The Interpretation Of His Word And Ways. 95

CHAPTER 8: The Displeasure Of Jonah At The Preservation Of Nineveh.. 108

PART I: The Quotations Made By Prophets From The Writings Of Earlier Prophets And Servants Of God 143

PART II: On The Dependence Of The Evil And The Good In Prophecy On The Spiritual Condition Of The Persons Interested In Its Tidings 152

PART III: On Certain Modern Theories Respecting The Author And The Book Of Jonah 167

Today's Cancel Culture
The Excellency of Christ (eBook)
John Owen
The Just Shall Live by His Faith (eBook)
John Owen
The Just Shall Live by His Faith: Faith in a Time of Public Calamity - Hab 2:4
John Owen
Jesus, Satan and the New Age
Steven Bancarz
The Surprising Transformation of the Disciples of Jesus
Ryan Higginbottom
Daniel’s Vision of the Son of Man
Keith Mathison
What Is an Evangelical?
W Robert Godfrey
Arrogance
Mike Ratliff
Blog Share What Is Self-Discipline?
Steven J Lawson
The Fear of the Lord . . . for today?
Ed Welch
Cheap knockoffs: Five Christian heresies that made the modern world
Janie B. Cheaney
God’s Beauty for the Bored, Busy, and Depressed
Tony Reinke
Does Science Really Disprove God?: Open Letter to an Atheist Loved One
Mitch Stokes
Augustine's Four-fold State of Humanity
Third Mill
What is the Fourfold State of Man?
Rev Joseph R Nally
Do not Let the Algorithm Control You
Wyatt Graham
The Mark of an Educated Mind
Andrew Doyle
Resurrection Life in the Age to Come
Alan W Gomes
Gregory of Nyssa: The Father of Fathers
Shawn J. Wilhite
Hilary of Poitiers: The Hammer of the Arians
Peter Barnes
Why Read Early Christian Authors?: Examining the Modern Life with Help from the Past
Michael Haykin
Augustine of Hippo: A Life Marked by a Deep Commitment to Orthodoxy and Sovereign Grace
Dr William VanDoodewaard
The State of Glory - WCF 9.5
Curated Resources
The State of Innocency (Resources)
Reformed Study
The Will of Man - WCF 9.1
Reformed Study
The State of Glory
Dr Sinclair B Ferguson
The State of Grace
Cornelis P Venema
The State of Nature
Dr William VanDoodewaard
The State of Innocence
Richard Belcher
Who Am I?
Burk Parsons
Pastors, Watch Your Doctrine
Greg Wills
God’s Servant Must Not Be Quarrelsome: Good Pastors Know When to Pick a Fight But Prefer to Avoid Them
Kevin DeYoung
Pastors on Social Media
Jonathan Leeman
The Sign of a Heart Changed by Grace
Duties of Christians Fellowship (eBook)
John Owen
Pastors, Covid, and Criticism
Andrew Roycroft
How Could Forgiveness Possibly Lead to Fear?
Michael Reeves
With Liberty and Justice for All
Kevin DeYoung
Objection: The terms "monergism" and "synergism" ain't in the Bible
Isaiah 9:6: “Everlasting Father”: The Error of Oneness Theology Refuted
Edward Dalcour
Face to Face with the Holy One
Dr. John MacArthur
How church history will help you defend the faith
Michael Haykin
Why Some Christian Leaders Don’t Post About Current Events on Social Media
David Qaoud
Memory, Monuments, Morality, and Mayhem: The Burden of Reckoning with Historical Symbols
Albert Mohler
An Identity That Can Handle Either Success or Failure
Timothy J Keller
Life and Prosperity, Death and Destruction - Deuteronomy 30 (YouTube)
Timothy J Keller
How to Bring the Gospel to Post-Christian America (YouTube)
Timothy J Keller
How to Deal with Dark Times
Timothy J Keller
Assurance of Salvation (MP3)
Darrell B. Harrison