Jesus Christ the Son of God by Theodore Beza 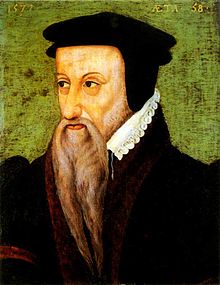 How God has turned the sin of man to His glory

There would remain nothing more for the whole world, except to go to its ruin (Rom 3:19). But God, being not only very righteous, but also very merciful, had according to His infinite wisdom, eternally established a way to turn all the evils to His great glory: to the greater manifestation of His infinite goodness (Rom 3:21-25), towards those whom He has chosen eternally so as to be glorified in their salvation (Rom 8:29; 9:23). And, on the other side, He has turned the sin of man to the manifestation of His sovereign power and His wrath, by the just condemnation of the vessels of wrath prepared for destruction (Rom 9:22; Ex. 9: 6).

‘If all were saved, the wages of sin demanded by justice would be hidden. If none were saved, no-one would see what grace bestows.’

Jesus Christ is the sole Mediator chosen and promised by God

This sole and unique way is the mystery of the Incarnation of the Son of God with all which flows from it. Bit by bit this was promised from Adam to John the Baptist, published and preached by the patriarchs and the prophets, and also typified in various ways under the Law (Gen 3:15; 12:3; 18:18; 22:18; Deut. 18:15-18; 2 Sam 7:12; Rom 1:2-3 etc.) Thus, the Son is fully contained in the books of the Old Testament, so that the men of those times were saved by faith in Jesus Christ who was to come.

Therefore there has never been and there never shall be but one covenant of salvation between God and men (Heb. 13:8; Rom 3:25; 1 Tim 2:5-6; 1 Cor. 10:1-11; Eph. 1:7-10; see the whole Epistle to the Hebrews). The substance of this covenant is Jesus Christ. But, having regard to the circumstances, there are two Testaments or ‘Covenants’. We have the authentic titles and contents of them; which we call ‘Holy Scripture’ and the ‘Word of God’. One is called ‘Old’ and the other ‘New’ (Jer. 31:31,32; Heb 8:6). The second is much better than the first, for the first did declare Jesus Christ, but from afar off, and hidden under the shadows and images which vanished at His coming; He Himself is the Sun of Righteousness (John 4:23,24).

Why it was necessary that Jesus Christ be true man in nature, in His body and in His soul, but without any sin

It was necessary that the Mediator of this covenant and this reconciliation be true man, but without any stain of original sin or any other, for the following reasons: Firstly, since God is very righteous and man is the object of His wrath, because of natural corruption (1 Tim 2:5; John 1:14; Rom 1:3; Gal 4:4; Rom 8:2-4; 1 Cor. 1:30), it was necessary in order to reconcile men with God, that there be a true man in whom the ruins caused by this corruption would be totally repaired.

Thirdly, all men are covered with an infinite number of sins, as much internal as external; that is why they are liable to the curse of God (Rom 3:23-26; Is 53: 11, etc). It was therefore necessary that there be a man who would fully satisfy the justice of God in order to pacify Him.

Finally, no corrupt man would have been able, in any way, to even begin to fulfil the least of these actions. He would first of all have had need of a Redeemer for himself (Rom 8:2; 2 Cor. 5:21; Heb 4:15; 1 Pet 2:22; 3:18; 1 John 2:1-2). So much was necessary for himself before he could buy back the others, or could do anything pleasing or satisfying to God (Rom 14:23; Heb 11:6). It was therefore necessary that the Mediator and Redeemer of men be true man in his body and in his soul, and that he be, nevertheless, entirely pure and free from all sin. Why it was necessary that Jesus Christ be true God

It was necessary that this same Mediator be true God and not only man (John 1:14, etc); at the very least for the following reasons:

Secondly, it is necessary, from the justice of God, that there be a relationship between the crime and its punishment. The crime is infinite, for it is committed against One whose majesty is infinite. Therefore there is here need of an infinite satisfaction; for the same reason, it was necessary that the One who would accomplish it as true man be also infinite, that is to say, true God.

Thirdly, the wrath of God being infinite, there was no human or angelic strength known which could bear such a weight without being crushed (John 14:10,12,31; 16:32; 2 Cor. 5:19). He who was to live again, after having conquered the devil, sin, the world and death united to the wrath of God, had to be therefore not only perfect man, but also true God.

Lastly, in order to better manifest this incomprehensible goodness, God did not wish that His grace should only equal our crime; He willed that where sin abounds, grace superabounds (Rom 5:15-21). For this reason, while he was created in the image of God, the first Adam, author of our sin, was earthly, as his ‘frailty showed well (1 Cor. 15:45-47). Jesus Christ, on the contrary, the second Adam, through whom we are saved, while being true and perfect man, is nevertheless the Lord come from Heaven, that is to say, the true God. For, in essence, all the fullness of divinity dwells in Him (Col. 2:9). If the disobedience of Adam made us fall, the righteousness of Jesus Christ gives us more security than we had previously. We hope for life procured by Jesus Christ, better than that which we lost in Adam; even more so as Jesus Christ surpasses Adam.

3.22 The two natures, that of God and that of man, have been united in one Person since the moment of the conception of the flesh of Christ

We confess that, from the moment of this conception, the Person of the Son has been inseparably united to the human nature (Matt 1:20; Luke 1:31,32,35,42,43). There are not two Sons of God, or two Jesus Christs: but One alone is properly Son of God, Jesus Christ. At all times the properties of each of the two natures remain entire and distinct. For the divinity separated from the humanity, or the humanity disjoined from the divinity, or the one being confounded with the other, would profit us nothing.

Jesus Christ is therefore true God and true man (Matt 1:21-23, Luke 1:35). He has a true human soul, and a true human body formed from the substance of the virgin Mary, and by the power of the Holy Spirit. By this means, he was conceived and born of this virgin Mary, virgin, I say, before and after the birth. And all this was accomplished for our redemption.

Summary of the accomplishment of our salvation in Jesus Christ

Finally, to crown the satisfaction for our sins which He took upon Himself (Is 53:4-5), He was captured in order to release us, condemned so that we might be acquitted. He suffered infinite reproach in order to place us beyond all shame. He was nailed to the cross for our sins to be nailed there (Col. 2:14). He died bearing the curse which we deserved, so as to appease for ever the wrath of God through the accomplishment of His unique sacrifice (Gal 3:13; 2 Cor. 5:21; Heb 10:10,14). He was entombed to show the truth of His death, and to vanquish death even in its own house, that is to say even in the grave; He experienced no corruption there, to show that, even while dead, he had conquered death (Acts 2:31). He was raised again victorious so that, all our corruption being dead and buried, we might be renewed in new, spiritual and eternal life (Rom 6; and nearly everywhere in St. Paul). By this means, the first death is no longer to us a punishment for sin and an entrance into the second death, but, on the contrary, is the ending of our corruption and an entrance into life eternal. Lastly, being raised again and then having spoken throughout forty days here below to give evidence of His resurrection (Acts 1:3,9-11), He ascended visibly and really far above all heavens, where He sat down at the right hand of God His Father (John 14:2). Having taken possession for us of His eternal kingdom, He is, for us also, the sole Mediator and Advocate (1 Tim 2:5; Heb 1:3; 9:24), and governs His Church by His Holy Spirit, until the number of the elect of God, His Father, is completed (Matt 28:20, etc).

How Jesus Christ, having withdrawn into heaven, is nevertheless here below with His own

We understand that glorification brought immortality to the body of Jesus Christ, besides sovereign glory; but this did by no means change the nature of His true body, a body confined to one certain space and having bounds (Luke 24:39; John 20:25; Acts 1:3). For this reason, He took away into Heaven, from our midst, His human nature, His true body (Acts 1:9-11; 3:21). There He shall remain until He comes to judge the living and the dead.

But, with regard to the efficacy of His Holy Spirit, as to His Divinity, (by which we are made partakers not only of half of Christ, but of all of Him and all His goods, as will be said soon), we acknowledge that He is and shall be with His own until the end of the world (Matt 28:20; John 16:13; Eph. 4:8). This is what Jesus Christ said regarding Himself-, ‘The poor you will have always with you, but Me you will not have always.’ (Matt 26:11); again, after His Ascension, the angels say to the Apostles: ‘Jesus who was taken up from you into heaven shall so come as you saw Him go away into Heaven.’ (Acts 1:11). And St Peter says to the Jews that Heaven must hold Him until the time of the restoration of all things. (Acts 3:21). For the same reason, St Augustine, following Scripture, has well said that it is necessary to guard oneself from stressing the Divinity to the point of coming to deny the truth of the body; the body is in God, but it is not necessary to draw the conclusion that it is everywhere, as God is everywhere.

There can be no other true religion

In this mystery of our redemption, incomprehensible to human reason, God has revealed Himself as true God, that is to say, perfectly just and perfectly merciful.

On the other side, He has revealed Himself as perfectly merciful, for, finding in us only ground for damnation, He willed that His Son take our nature in order to find in Him the remedy which would appease His justice (Rom 5:8; 1 Cor. 1:30). Freely communicating Him to us, with all the treasures which He possesses (Rom 8:32), He makes us partakers of eternal life, solely by His goodness and mercy, on condition that we take hold of Jesus Christ by faith; which we will develop a little later.

But, on the contrary, any religion which opposes to the wrath of God anything other than the sole innocence, righteousness and satisfaction of Jesus Christ, received by faith, strips God of His perfect justice and His mercy. For this reason, such a religion (eg. Romanism) must be regarded as false and deceptive.

Excerpt from The Christian Faith by Theodore Beza