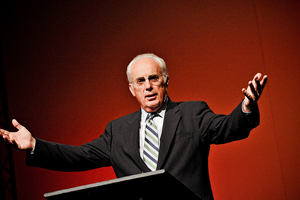 There isn’t a greater illustration of electing grace than the Apostle Paul. He is on his way to Damascus, Acts 9, to kill Christians. He is stopped dead in his tracks. He is redeemed and he is called to the apostate all by the sovereign intervention of Christ Himself. So we could say he’s thankful for electing grace. Everything starts there. He was chosen for salvation. That was God’s divine and glorious purpose. It was the grace of God that brought salvation.
Paul talks about the incredible electing, the incredible enabling, the incredible entrusting and employing grace of God that not only saved him and strengthened him and made him worthy to hold the trust of his salvation, but allowed him to serve with humility and blessing. So when you think of grace you don’t think of some very limited thing. That’s why 2 Corinthians 9:8 says, “And God is able to make all grace abound to you so that you will have all sufficiency in all things and be able to abound unto every good work.” Grace goes way beyond just the saving act. In 2 Corinthians 12:9 he said, “My grace is sufficient for you,” for everything.
So, he speaks then of the source of grace as being God, the source of grace in its fullness for all of Christian life and ministry. And then the need for grace. In 1 Timothy 1:13 the need is very clear, before his conversion he was a blasphemer and a persecutor and injurious. The grace of God is so vivid in his mind because of what he used to be of what he was. He persecuted the church of God and wasted it, he says in Galatians 1:13. Because of what he was his need was profound. A great sinner has to be given great grace, to be chosen, to be empowered, to be trusted, to be appointed to serve Christ, to be made an Apostle is one thing, to have that done to someone who used to be a blasphemer, persecutor and injurious is quite something else.
Now this was the need for grace. This is a desperate sinner. This is a mass murderer, a violent persecuting God- hating, Christ-rejecting sinner of the worst possible imagination. So great was the need for grace.
Here you are a naked destitute useless condemned vile sinner without hope, without anything in the world, and when God by electing grace moves in to redeem you and responds to your willing heart, therein does He bring grace that super abounds beyond all your sin and even beyond that He brings you the capacity to trust God and the capacity to love God and love others. And that’s the package that comes with saving grace. Isn’t that marvelous?

John MacArthur, from the sermon  A Personal Testimony of God's Saving Grace 1 Timothy 1:12-17.

Read Acts 9:1-19. Consider the infallible, effectual, electing grace of God to save Paul. Have you experienced this sovereign grace?