Honey Out of the Rock by Thomas Wilcox 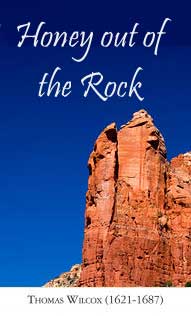 Thomas Wilcox was born in August, 1621 at Lyndon, Rutland, and probably was well educated. He was a Particular Baptist elder of a small congregation, which met at his house in London before the Plague. In those days of persecution, he was known for moderation, and preached frequently among the Presbyterians and independents. He was imprisoned in Newgate more than once, and suffered much for the sake of Nonconformity. After 1665, he pastored a Particular Baptist church, whose meeting-house was a small wooden building in Three Cranes Alley, Tooley Street in the Borough of Southwark. He labored lovingly, with pen as well as tongue, until his death on May 17, 1687 at the age of 65, leaving a widow and three children.
Wilcox's well-known tract, “A Choice Drop of Honey from the Rock Christ,” often reprinted, and also translated, was much used of God.  In the early 18th century there lived in central Finland a farmer named Paavo Ruotsalainen; here in the wilderness of Savo he had no other schooling apart from attending confirmation classes, but he loved reading, and in his early years was given a Bible, a very rare gift in those days; he had read it through three times by the time he was sixteen. For a long time he was unable to find peace for his soul, so much so that his family feared for his mind. Then Willcox ’s tract came his way,and showed him the one thing needful. Also he heard of a smith who might help him, and having found him, he was given the news that Christ would make himself known to him, a needy sinner; and it was but a short time before the Lord granted peace.
Soon we find that Ruotsalainen was going about preaching; it is estimated that if all of his journeys were added together,it would amount to a voyage around the world, and all the time he was a farmer needing to attend to his fields, and making most journeys by foot. He found that communion with Christ is not only made a reality to those alone who recognize their own wretchedness, but also that only by the same acknowledgement can this communion be maintained. For many, the sweet sensations of forgiveness are experienced solely in the early stages of conversion. One of his much quoted statements goes like this: “You started on your way with honey, but now have pitch and tar for food.” He feared a false security based on a dead faith. Only in the school of the cross is grace given; only the re, is the Christian assured of his salvation.
In his old well-thumbed Bible, preserved in Aholans aari, the farm in Nilsia where he spent the last years of his life, he had someone write the following words: “In this book lies the secret and kernel of the whole of life, and no one, neither the good nor the clever, can know or understand this great and precious secret, when his eyes have not been opened to his own wretchedness.” Taught thus by the Lord, he thought deeply and knew well what was in the heart of man. He became the Huntington of Finland. Many valued his counsel, and he saw the Lord raise up a generation of preachers, and many communities of the Lord’s people gathered as a result of his ministry; and so much stemmed in the first place, under God’s blessing to the reading of “A Choice Drop of Honey from the Rock Christ.” We now send forth his tract, which was recommend ed by William Romaine in his day, desiring the Lord’s rich blessing upon it.