A History of Christian Doctrine (eBook) 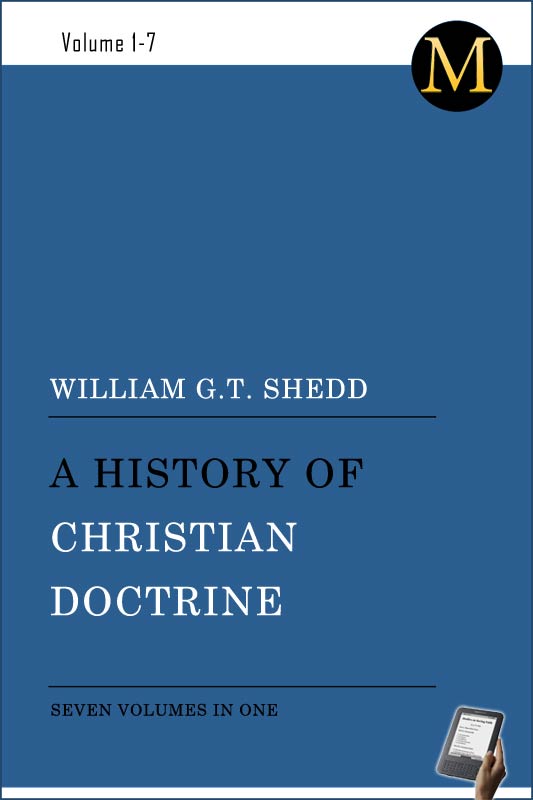 THE History of Christian Doctrine here given to the public is the result of several years of investigation, while the author held the professorship of Ecclesiastical History in the Theological Seminary at Andover, Massachusetts. As this is the first attempt of the kind in English literature, to write an account of the gradual construction of all the doctrines of the Christian religion, he had no models before him, and was compelled to originate his own method. Upon a survey of the vast field, it appeared to be the most simple and perspicuous plan to investigate each of the principal subjects by itself, starting from the first beginnings of scientific reflection upon it, and going down to the latest and most complete forms of statement. This method, though not without some disadvantages, recommends itself by reason of the opportunity it affords for continuous investigation, each part flowing out of the preceding and preparing for what follows, and the whole making a single and strong impression. Such a method is in harmony with the nature of history itself. The reader follows a single stream from its rise in its head-waters through all its windings, until it discharges itself, immenso ore, into the sea.

The history of Christian doctrine thus conceived and composed is one of the strongest of all defences of the Christian faith. It is a common remark, that a powerful statement is a powerful argument. This is true of the dogmas of Christianity. But there is no statement of revealed truth more clear, connected, and convincing, than that which it obtains in the gradual and sequacious constructions of the Church, from century to century. Let any one trace the course of thinking by the theological mind, upon the doctrine of the Trinity, e.g., and perceive how link follows link by necessary consequence; how the objections of the heretic or the latitudinarian only elicit a more exhaustive, and at the same time more guarded, statement, which carries the Church still nearer to the substance of revelation, and the heart of the mystery; how, in short, the trinitarian dogma, like the Christian life itself as described by the apostle, "being fitly joined together, and compacted by that which every joint supplieth, maketh increase unto the edifying of itself" into a grand architectural structure,—let this process from beginning to end pass before a thinking and logical mind, and it will be difficult for it to resist the conviction that here is science, here is self-consistent and absolute truth. It cannot be that the earnest reflection of all the Christian centuries should thus have spent itself upon a fiction and figment. The symbol in which this thinking embodied itself must be the exponent of a reality. Such is the impression made, and such is the unavoidable inference.

Christianity is, ultimately, its own best defence. The argument of a holy and beautiful life, it is universally conceded, is unanswerable; and so is the argument of a profound and homogeneous system. At a time when the divine origin and authority of the Christian religion are disputed and combatted with more than ordinary violence, it is seasonable to introduce the opponent to the Christian dogmas themselves, in the very act and process of their scientific construction. If he is capable of connected thinking himself, and his mind is at all accustomed to high problems, before he is aware he will be caught in the intellectual process, and whether he accept the conclusions of the ecclesiastical mind or not, he cannot but respect the mental acumen and energy which are exhibited. The history of such a mind as that of Ferdinand Christian Baur exemplifies this. To what degree that remarkable scholar and thinker was practically affected by the studies of many years, in the mines of Christian doctrine, is known only to the Searcher of hearts; but no one can peruse a page of any of his dogmatico-historical works without perceiving, that contempt for that great system which the oecumenical mind has built up out of the living stones of revelation was no feeling of his. The system was too vast in its reach, too comprehensive in its scope, too high and too deep in its aims, to provoke either ridicule or scorn. It might be a failure, but it was a splendid failure.

Respecting the sources whence this history is derived, the authors mentioned under the head of "Literature," at the beginning of each book, will indicate the works that have been most drawn upon. The writings of Athanasius, Augustine, and Anselm, have yielded much solid and germinant material. To the dogmatic historians of Germany of the present century, I am greatly indebted; and not less so to the great lights of the English Church in the preceding centuries. These latter have been unduly overlooked, amidst the recent fertility of the Teutonic mind. Though comprising no continuous and entire history of Christian doctrine, and even when investigating a particular subject oftentimes doing it incidentally, the labors of Hooker and Bull, of Pearson and Waterland, are every way worthy to be placed beside those of Baur and Dorner. The learning is as ample and accurate, the logical grasp is as powerful, and the judgment more than equal. To these must be added the two manuals of Baumgarten-Crusius and Hagenbach, which have to some extent furnished the rubric under which the generalizations have been made, as well as considerable material itself.

But while the leading ancient, mediaeval, and modern authorities have been used, it has been my endeavor to fuse everything in my own mind. Perhaps the chief criticism that may be made upon the work is, that it betokens subjective qualities unduly for a historical production. That the work pays more attention to the orthodox than to the latitudinarian drift of thought, is plain. It is impossible for any one author to compose an encyclopaedic history. Every work of this kind must be stronger in some directions, than in others. I have felt a profound interest in the Nicene trinitarianism, the Augustinian anthropology, and the Anselmic soteriology, and from these centres have taken my departures. To what degree I have succeeded in fairly stating the variant or opposing theories, must be left to the judgment of each reader.

The work has been put to press amidst the pressure of engagements incident to a large pastoral charge. More leisure would have improved it. But it is committed, with all its imperfections, to the common current, with the hope, and aspiration, that it may contribute something towards that victory and triumph to which Christian science is destined in the earth.

"We hold that this is the most important contribution that has been made to our theological literature during the present age." - Presbyterian Standard

"In our judgment, no production of greater moment has been given to the public in a long time." - Princeton Review "

On its first appearance this work by Dr. Shedd was unanimously recognized as filling with remarkable success a blank that had existed in our English literature on this important subject, and it still holds the foremost place in works of this class." - Edinburgh Daily Review Commendations from the Present:

"I have often refered to Shedd's 'History of Christian Doctrine' in preparation for class, for personal understanding of difficult issues, and for evangelical encouragement." - Dr. Tom J. Nettles

"History is theology lived out in good or contrary examples. The history of theological thought is a missing foundation in our a-historical age. This is the case in culture and in the church-at-large. Ideas have consequences. They have tangible effects and then become causes for a new generation as they generate more ideas. The importance of Shedd's work cannot be over-stated. Shedd will help sort out what is gold, what is good, and what is to be left behind." Dr. Mike Renihan

BOOK FIRST: INFLUENCE OF PHILOSOPHICAL SYSTEMS UPON THE CONSTRUCTION OF CHRISTIAN DOCTRINE

CHAPTER I: Philosophical influences in the Ancient Church: A.D. 1–730

CHAPTER I: Defences of Christianity in the Apologetic Period: A.D. 70–254

CHAPTER II: Defences of Christianity in the Polemic Period: A.D. 254–730

CHAPTER I: General Doctrine of the Divine Existence

CHAPTER V: Doctrine of the Person of Christ

CHAPTER I: Theories of the Origin of the Soul

CHAPTER VII: Anthropology of the Reformers

CHAPTER IX: Total survey of the history of Anthropology

CHAPTER IV: Soteriology of the Reformers

CHAPTER I: Second Advent of Christ

CHAPTER I: Ancient and Mediaeval Symbols