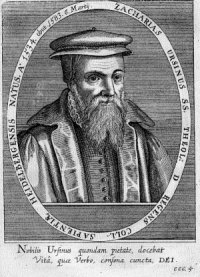 The Heidelberg Catechism is often grouped together with two other Protestant Christian documents, the Belgic Confession and the Canons of Dordt, as the basis of Faith for many Churches, particularly Reformed Churches. It received its name from the place of its origin, Heidelberg, the capital of the German Electorate of the Palatinate. There, in order that the Reformed faith might be maintained in his domain, Elector Frederick III commissioned Zacharias Ursinus, professor at Heidelberg University, and Caspar Olevianus, the court preacher, to prepare a manual for catechetical instruction. Out of this initiative came the Catechism, which was approved by the Elector himself and by the Synod of Heidelberg and first published in 1563.

With its comfort motif and its warm, personal style, the Catechism soon won the love of the people of God, as is evident from the fact that more editions of the Catechism had to be printed that same year. While the first edition had 128 questions and answers, in the second and third editions, at the behest of the Elector, the eightieth question and answer, which refers to the popish mass as an accursed idolatry, was added. In the third edition the 129 questions and answers were divided into 52 "Lord's Days" with a view to the Catechism's being explained in one of the services on the Lord's Day. That salutary practice is still maintained today, in harmony with the prescription of the Church Order of Dordrecht.

In the Netherlands the Heidelberg Catechism was translated into the Dutch language as early as 1566, and it soon became widely loved and used in the churches there. It was adopted by several National Synods during the later sixteenth century, and was finally included by the Synod of Dordrecht, 1618-1619, where it has remained to this day.

Catechisms usually have three functions: instruction for all ages, preparatory training for confirmation, and the statement of a confessional position. The Heidelberg Catechism fulfills these three functions.

The Palatinate, south and west of Mainz, became Lutheran in 1546 under Elector Frederick II, but soon Calvinist ideas spread into the area and a series of acrimonious theological disputes broke out over the issue of the "real presence" in Holy Communion. When Frederick III the Pious (1515-76) inherited the area, he was aware of the disputes and studied both sides of the "real presence" argument. He came to the conclusion that Article XI of the Augsburg Confession was popish and opted for a Calvinist position. To foster his position, even though he was opposed by other Lutheran princes who pressured him to support the Peace of Augsburg, which did not recognize the Reformed position, Frederick staffed the theological faculty of the Collegium Sapientiae in Heidelberg, his capital, with those of Reformed persuasion, and he began to reform the worship of the churches in the Palatinate. In an effort to reconcile the theological parties, to bring about reform, and to defend himself against the Lutheran princes, Frederick asked the theological faculty to draw up a new catechism which could be used in the schools as a manual of instruction, a guide for preaching, and a confession of faith. Although many of the theological faculty were involved, as was Frederick himself, the two commonly acknowledged architects of the catechism were Caspar Olevianus and Zacharias Ursinus. The German text, with a preface by Frederick III, was adopted by a synod in Heidelberg on January 19, 1653. It was translated into Latin at the time of its publication.

The catechism is important for at least three reasons. (1) It came to be translated into numerous languages and was adopted by many groups, making it the most popular of Reformed statements. (2) Although born in the midst of theological controversy, it is irenic in spirit, moderate in tone, devotional and practical in attitude. It espouses Reformed theology as dictated by Frederick III, but Lutheran ideas were not slighted. The avoidance of polemics in the catechism, except for question 80, the use of clear language, and a sense of fervency helped to allay somewhat the theological controversies of that time and to guarantee an acceptance among the Reformed outside the Palatinate. (3) The organization of the catechism is most unusual. The 129 questions and answers are divided into three parts patterned after the book of Romans. Questions 1-11 deal with mankind's sin and misery; questions 12-85 are concerned with the redemption in Christ and faith; the last questions stress man's gratitude, expressed in action and obedience, for God's love. The questions are further structured so that the whole catechism can be covered in fifty-two Sundays. In addition, the catechism provides an exposition of the Reformed view of the Apostles' Creed and the Ten Commandments. The use of the first person singular encourages the catechism to be a personal confession of faith.

The Reformed theological perspective is found (1) in the doctrine of the sacraments, particularly the Eucharist, where believers are partakers in the true body and blood of Christ through the working of the Holy Spirit; (2) in the centrality of Scripture as authority; (3) in good works as the Christian response to divine grace; and (4) in the church as the true source of Christian discipline. The issue of predestination is found in question 54, where election is affirmed but reprobation and limited atonement are not. An example of Lutheran concepts is found in the section on man's sinful condition.