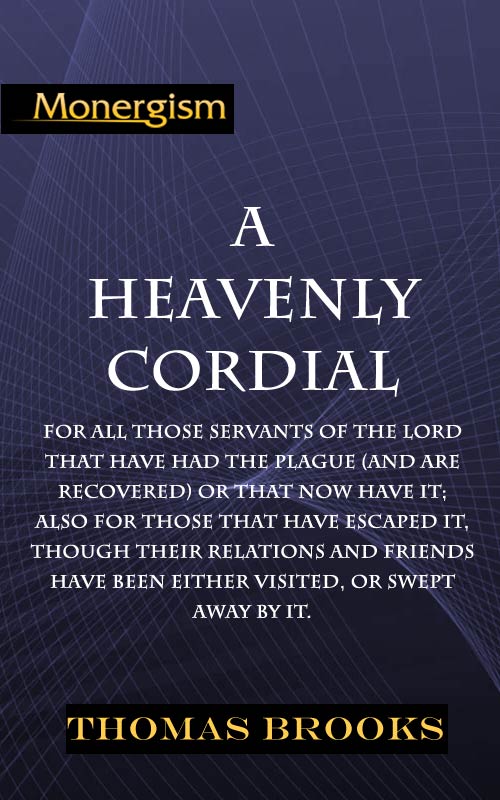 For all those Servants of the Lord that have had the PLAGUE (and are recovered) or that now have it; also for those that have escaped it, though their Relations and Friends have been either visited, or swept away by it. OR Thirteen DIVINE MAXIMES or CONCLUSIONS in respect of the PESTILENCE, which may be as so many supports, comforts, and refreshing springs, both to the visited and preserved people of God in this present day. ALSO Ten Arguments to prove that in Times of Common Calamity, the people of God do stand upon the advantage ground, as to their outward preservation and protection above all other people under Heaven. ALSO  Eight Reasons why some of the precious Servants of the Lord have fallen by the Pestilence in this Day of the Lord's Anger.

When the pestilence is among a people, it is the Lord alone that sends it.

2 Sam. 24:15, 'So the Lord sent a pestilence upon Israel, from the morning even to the time appointed: and there died of the people, from Dan even to Beer-sheba, seventy thousand men.' Num. 16:46, 'Wrath is gone out from the Lord; the plague is begun.' Num. 14:12, 'I will smite them with the pestilence, and disinherit them.' Deut. 28:21, 'The Lord shall make the pestilence cleave unto thee, until he hath consumed thee from off the land, whither thou goest to possess it.' Ezek. 14:19, 'Or if I send a pestilence into that land, and pour out my fury upon it in blood, to cut off from it man and beast;' ver. 21, 'For thus saith the Lord God, How much more when I send my four sore judgments upon Jerusalem, the sword, and the famine, and the noisome beast, and the pestilence, to cut off from it man and beast?' Amos 4:10, 'I have sent among you the pestilence, after the manner of Egypt.' Hence it is called, God's arrow, Ps. 91:5; and when God shoots those arrows into kingdoms, cities, towns, families, Ps. 38:2, none can pull them out but God himself.

I. The first divine maxim is this—When the pestilence is among a people—it is the Lord alone who sends it.

II. The second divine maxim is this—The pestilence and all other judgments of God are limited as to places.

III. The third divine maxim is this—All the judgments of God are limited, not only to places—but also to people.

V. The fifth divine maxim is this—The Lord sometimes takes away his dearest people by some one judgment, so that he may by that means deliver them from many judgments

VI. The sixth divine maxim is this—None of God's judgments upon his people ever make any change or alteration of God's affections towards his people.

VII. The seventh divine maxim is this—Many times when the poor people of God cannot carry it with God for the preservation of a whole land or nation—yet they shall then be sure to have the honor and the happiness to be so potent and so prevalent with God, as to prevail with him for their own personal preservation and protection.

VIII. The eighth divine maxim is this—Sword, famine, and pestilence can only reach our outward man—they only reach our bodies and our temporal concerns; they cannot reach our souls, nor our spiritual nor our eternal concerns.

IX. The ninth divine maxim is this—There are no people upon the earth that in times of common calamity stand upon such fair grounds for their preservation and protection, as the people of God do.

The care that God exercises towards his people is

Eight Answers to a Question

X. The tenth divine maxim is this—That such saints as do fall by the sword or by the pestilence, they receive no loss, no wrong, no injury, by these sad dispensations.

XI. The eleventh divine maxim is this—Though a godly man should die of the plague—yet he shall be certainly delivered from the evil of the plague.

XII. The twelfth divine maxim is this—That God knows how to distinguish his people, and how to difference his people from others, when the pestilence rages in the midst of them