The Gospel Worthy of All Acceptation - Modernized (eBook) 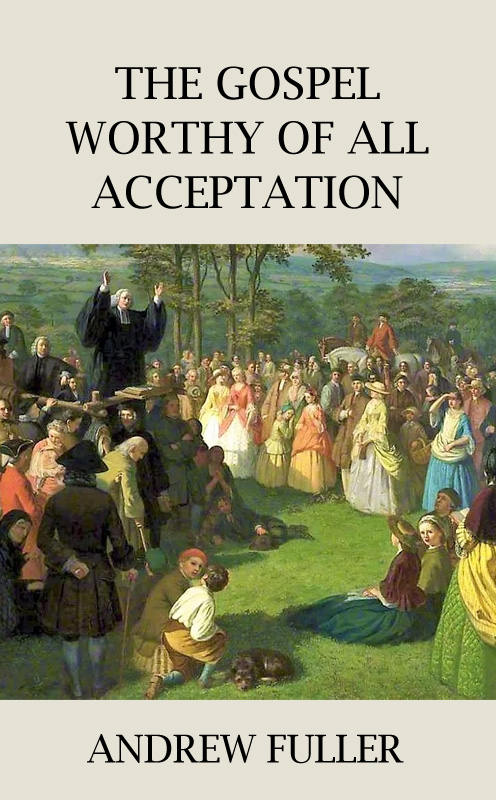 Go, preach the gospel to every creature: he that believes and is baptized, shall be saved; but he that does not believe shall be damned! — Jesus Christ.

The following particulars are premised for the sake of a clear understanding of the subject: —

First, There is no dispute about the doctrine of election, or any of the discriminating doctrines of grace. They are allowed on both sides. And it is granted that none ever did, nor will believe in Christ, except those who are chosen of God from eternity. The question does not turn upon what are the causes of salvation, but rather upon what are the causes of damnation. As Mr. CHARNOCK happily expresses it,

“No man is an unbeliever, but because he will be so; and every man is not an unbeliever, because the grace of God conquers some, changes their wills, and bends them to Christ.”

Secondly, Neither is there any dispute concerning who ought to be encouraged to consider themselves as entitled to the blessings of the gospel. Though sinners are freely invited to the participation of spiritual blessings, yet they have no interest in them (according to God’s revealed will) while they continue in unbelief. Rom 11.23 Nor is it any part of the design of these pages to persuade them to believe that they have. On the contrary, the writer is fully convinced that whatever is the secret purpose of God concerning them, they are at present under the curse.

Thirdly, The question is not whether men are bound to do anything more than the law requires; but whether the law, as the invariable standard of right and wrong, does not require every man to cordially embrace whatever God reveals — in other words, whether love to God with all the heart, soul, mind, and strength, does not include a cordial reception of whatever plan He shall, at any period of time, disclose?

Fourthly, The question is not whether men are required to believe any more than is reported in the gospel, or anything that is not true; but whether that which is reported ought not to be believed with all the heart, and whether this is not saving faith?

Fifthly, It is no part of the controversy, whether unconverted sinners are able to turn to God, and to embrace the gospel; but what kind of inability they lie under with respect to these exercises? Whether it consists in the lack of natural powers and advantages, or merely in the lack of a heart to make a right use of them? If the former, it is granted that obligation would be set aside; but if the latter, it remains in full force. Those who are in the flesh cannot please God. Rom 8.8 But it does not follow that they are not obliged to do so. And their obligation requires this to be clearly insisted on, that they may be convinced of their sin, and so induced to embrace the gospel remedy.

Sixthly, The question is not whether faith is required of sinners as a virtue which, if complied with, shall be the ground of their acceptance with God; or that on account of it, they may be justified in his sight — but whether it is not required as the appointed mean of salvation. Believing in the righteousness of Jesus, is the only ground of justification; but faith in him is necessary to our being interested in it.3 We remember the fatal example of the Jews, which the apostle Paul holds up to our view. The Gentiles, he says, who did not follow after righteousness, have attained to righteousness; even the righteousness which is of faith; but Israel, who followed after the law of righteousness, has not attained to the law of righteousness: Why not? BECAUSE THEY DID NOT SEEK IT BY FAITH, but as it were by the works of the law; for they stumbled at that stumbling-stone.4 Though we had not been told elsewhere, that in doing this, they were disobedient; 5 yet our judgments must be strangely warped by our system, if we did not conclude it to be their sin, and that by which they fell, and perished. And we dare not fail to charge our hearers, whether they will hear, or whether they will forbear, to beware of stumbling upon the same stone, and of falling after the same example of unbelief.

Finally, The question is not whether unconverted sinners are the subjects of exhortation; but whether they ought to be exhorted to perform spiritual duties? It is beyond all dispute, that the Scriptures exhort them to many things. If, therefore, there are any professors of Christianity who question the propriety of this, and who would have nothing said to them except that, “if they are elected, they will be called,” they are not to be reasoned with, but rebuked, as setting themselves in direct opposition to the word of God. Most of those who may differ from the author on these subjects, it is presumed, will admit the propriety of sinners being exhorted to duty; only this duty must, as they suppose, be confined to merely natural exercises, or such as may be complied with by a carnal heart, destitute of the love of God. It is one design of the following pages, to show that God requires the heart, the whole heart, and nothing but the heart; that all the precepts of the Bible are only the different modes in which we are required to express our love to Him; that, instead of its being true that sinners are obliged to perform duties which have no spirituality in them, there are no such duties to be performed; and that, so far from their being exhorted to everything but what is spiritually good, they are exhorted to nothing else. The Scriptures undoubtedly require them to read, to hear, to repent, and to pray, that their sins may be forgiven them. It is not, however, in the exercise of a carnal, but of a spiritual state of mind, that these duties are performed.